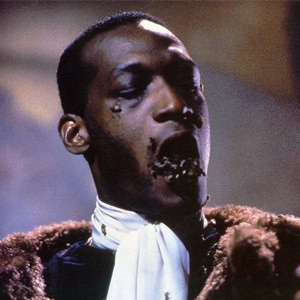 If someone told you that if you looked in a mirror and said the word “Candyman” five times, that a man with a hook for a hand would appear behind you and kill you, what would you do? If the answer is call them an idiot and defriend them on Facebook, congratulations you’re not in a horror movie. Here, of course, the myth is discussed and inevitably activated, with disturbing and horrifying results. Virginia Madsen (remember her?) plays our doomed heroine Helen Lyle, married to university lecturer Xander Berkeley and writing a thesis on local mythology, focusing on the Candyman, an educated son of a slave whose hand was sawn off by hooligans in the late 19th century, before he was smeared with honey, stung to death by bees and burned in a giant pyre. His legend lives on with the residents of Cabrini Green – the area where his ashes were scattered, blaming him for unsolved murders.
A  lot is left unclear in the film – possibly clarified in the sequels, I didn’t like it enough to find out, and there is much debate throughout as to whether Candyman, memorably embodied by the imposing Tony Todd, whose breathy voice, sinister smile and nightmarish stare were made for horror films, is real, whether Helen is going insane or if her husband is framing her to keep her out of the way while he gets his leg over a hot young student, something never really explained, and even by the end all three are still a possibility. There is plenty of gratuitous and unnecessary nudity and some horrible imagery – graffiti from smeared excrement – but the unclear nature of Candyman’s powers, origin, intent or motive and the lacking of anything inherently scary makes this a pointless watch.
Choose life 4/10