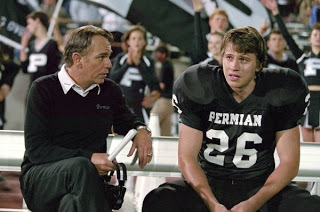 I’ve heard before that this is one of the better sports movies and, though I know very little about American football (or women’s rugby, as I like to call it), the games shown here were well shot and captivating. But, a good sports movie is still just a sports movie, and is therefore about nothing. I didn’t play sport in school. I dabbled in cricket a little, very briefly played football but then gave up when I saw the little benefit that could be achieved with the maximum effort put in. So instead I studied hard, did my homework and did OK in school, and from there went to college and university on my academic qualities, got a job and now make a living. I’m not a natural genius, I worked hard to get what I have, so when a film tells me that these kids playing football aren’t the brightest, and their only way out of their backwards hick town is via throwing a bag of air across a line or between two posts or whatever the hell they do over there, I just have to sit back and try not to throw everything to hand at my TV. I don’t care how committed the rest of your town is to a game, and it is just a game after all, if you don’t have yourself a backup plan when you’re relying on not damaging that oh-so-fragile body of yours to secure you’re future, you’re even dumber than anyone could have predicted.

Anyway, rant over, as you can guess, I’m no sports guy, so good luck to this film. Billy Bob Thornton is the football coach to a high school football team in a town full of meat sacks that shuts down every Friday night come game time. Every man, woman and inbred child in this town has an opinion they’re only too willing to share as to how the game should be played, and generally a different one after to the event as to how it should have been played. Local radio shows take call-ins from fans, on suggesting that they’re “doing too much learnin’ in this school,” and the kids themselves are under more pressure than is healthy from all around, particularly in the case of Garrett Hedlund’s Don Billingsley, whose father was a star in his day, yet Don is playing third string (I think this is a bad thing). Meanwhile current star quarterback Boobie Miles enjoys a celebrity lifestyle and just has to show up to training, with all the plays centred on him, so guess which players going to receive an unrecoverable injury? This true story from director Peter Berg, helmer of least anticipated film of 2012 Battleship, follows the Permian Panthers, for that is their team name, from the play-offs to the final, and though the outcome of the final match isn’t inherently obvious, everything else in this film is.
Choose life 4/10