It’s Richard Jenkins birthday! But as I’ve seen literally only six movies I remember him being in, it wouldn’t be a very fair list, especially seeing as I’ve yet to get to The Visitor, which is supposed to be one of his best. Apparently he’s in The Core, The Man Who Wasn’t There and Intolerable Cruelty, but I’m guessing they weren’t major roles. (5. One Night at McCool’s, 4. Step Brothers, 3. There’s Something About Mary, 2. Burn After Reading, 1. The Cabin in the Woods, Worst: Hall Pass)
So instead, it’s also Alexander Gould’s birthday! Who? He voiced Nemo in Finding Nemo, and today he turns 18 (God I feel old). So to celebrate, let’s look at some of the movie world’s greatest fish, and I’ll try not to take them all from Finding Nemo. Warning, this list contains spoilers.

5. The Beast, Big Fish
A so-called uncatchable fish, some say it’s the ghost of Henry Walls, a thief who drowned in the lake 60 years ago, whilst others say it is a lesser dinosaur, surviving since the cretaceous period. Some, very few, believe it to be the aquatic spirit of storyteller Edward Bloom (Albert Finney), lurable only with wedding-ring-bait on the day of your only son’s birth.

4. The sharks, Deep Blue Sea
Sharks, already the world’s oldest and most experienced predators, don’t really need a helping hand, least of all when that hand is increasing them dramatically in size and brain capacity, taking what is already a perfect killing machine into something than not only has the drive to kill, but can plan it too. They’d be higher on the list if the 45ft shark could overcome it’s primal instincts and not fall for a simple bait trick before escaping into the outside world, and all the dinner it can eat.

3. Bruce the shark, Jaws
Higher than those in Deep Blue Sea, Brucie is superior because he terrorises so many people on his own, and without an enhanced frontal lobe. He threatens an entire town, killing six people, whilst three hyper-intelligent sharks in the previous entry manage ten life forms (spoiler, one of them’s a parrot) between them, giving a kill-per-shark ration of just 3.33. The facts speak for themselves, Bruce is a far more efficient murder machine. Plus, Robert Shaw’s Quint has to count for at least 5 people.

2. Cleo, Pinocchio
Geppetto’s pet goldfish doesn’t really have a lot to do in the Disney classic, and in a film with a fairy, boys turning into donkeys and a cricket acting as the conscience of a living marionette, it’s a little disappointing that she doesn’t ever utter a word. Hell with that much insanity she should have a song and dance number. But look at little Cleo, isn’t she cute? And her interactions with Figaro, Geppetto’s impetuous cat, are a delight. 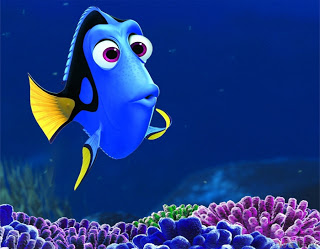 1. Dory, Finding Nemo
Personally, I prefer Bruce the vegetarian shark, or Willem Dafoe’s gravelly-toned ocean-weary moorish idol Gil, but Dory has to be number one, purely because my girlfriend is going to read this, and Dory is her favourite film character of all time (other than possibly Dug the talking dog from Up). To be fair, she’s got a point though, Dory is a pretty good character. Expanding on the common knowledge of a fish’s poor memory span, the regal blue tang suffers from a very poor short term memory, and subsequently has some of the Pixar film’s greatest lines, all courtesy of the spot-on casting of Ellen DeGeneres. She’s ditzy to the point of stupid (“Esc-a-pay. I wonder what that means? That’s funny, it’s spelled just like the word escape.”) but remains endlessly lovable and quotable.
Honourable mentions
The piranhas, Piranha 3D
Flounder, The Little Mermaid
And the worst…

Wanda, A Fish Called Wanda
Wanda is the prized possession of Michael Palin’s stuttering criminal Ken, and the guardian of the diamonds hidden at the bottom of the fish tank, but does she deserve to have the entire film named after her? She’s barely in it, and does nothing but swim around for a bit until Kevin Kline’s psychopathic Otto eats her. Plus, it was bloody impossible to find a decent picture of her, that’s how small a part of the film she’s the titular star of she is! Good movie though.