There are many things that keep me up at night, tossing and turning into the nether hours. Normally it’s that I’m wasting time sleeping when there are so many other things I should be doing (I’m one of those people with a neverending To-Do List, the first 10 or so items on which are generally Write Posts), or that I’m wasting my life watching films instead of actually living. Sometimes it’s my neighbours two-year-old (their second child is due in two days) or that niggling feeling at the back of my mind that I’ve forgotten something I’ve supposed to have done (more often that not: set an alarm). But now and then, I can’t sleep because I’m stuck thinking why, just why, do so many people rave about a film that I just can’t get my head around. This list is predominantly comprised of such movies, that the majority of movie nerds seem to love, yet for some reason or another just don’t do it for me. Don’t get me wrong, none of these are bad films, I’ve just never lifted them up to the levels of greatness so many others have.
Oh, and there’s no Worst film this week, as the Top 5… Movies I Should Like Less is an entirely different list, that’ll probably be dropping by next week, so stay tuned. 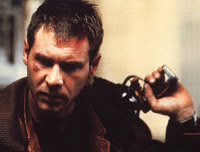 5. Blade Runner
I recently listened to an episode of the LAMBcast in which this was their Movie of the Month. I’ve never really considered it to be as much of a classic as everyone else seems to, but I realised it’s because I’ve never properly watched it. I’ve sat through it a few times, always on my own, but I’ve always been doing something else simultaneously (a method I’ve unforgivably used to ruin an awful lot of the first viewings of amazing films, such as Alien, Fight Club and countless others), and I think I always fall asleep about 10 minutes before the end. I couldn’t remember many of the things discussed in the cast, so this is only at number 5 on the list, as clearly I haven’t paid it enough attention. All being well, when I come to cross Ridley Scott’s dystopian replicant-hunting sci-fi off The List, it’ll no longer be worthy of a place here. Watch this space.

I really like The Thin Red Line, the only other Terrence Malick film I’ve seen so far (Days of Heaven is also on the List, and it’s likely that The Tree of Life will be next year), and had heard a lot about Badlands, Malick’s first film, before watching. Martin Sheen is a legend from the likes of Apocalypse Now and The West Wing, so I was eager to see him in an early performance as a cocksure killer on the run, so this could be a case of overly high expectations going in when I eventually came to cross the film off the List. As it turned out, I found the film disappointing (a feeling I’m becoming more and more familiar with the further I get through the List), with an irritatingly vague narration. I get that Sissy Spacek’s Holly is supposed to be childish and naive, but that doesn’t mean it won’t annoy me, and though she and Sheen give good early performances and the visuals are generally stunning (assisted by Malick’s love affair with sunsets) this is up there with Easy Rider as a supposed classic that I just don’t get.

3. The Incredibles
The Incredibles is a Pixar film that doesn’t star talking vehicles, so I love it. My issue is though, that everyone else seems to love it more than me. Whenever I hear people discussing their favourite Pixar movies, animated movies or just movies in general, this invariably crops up, yet I’ve always deemed it a lesser movie in their cannon. When I did a little Pixar day last year, the story of a family of retired superheroes was awarded a paltry 8/10, as opposed to the 9 and 10 given to Ratatouille and Wall-E. And for the life of me, I can’t understand why. Maybe it’s because the lists that include this amongst the greatest tend to be from America, where I feel the superhero subsect is a greater part of the general culture, with afternoon TV shows devoted to them that I never saw. Perhaps the tale of a bored office worker getting the chance to re-live the action of his youth hits home more with a slightly older generation (though I empathise more with this every day)? For whatever reason, this has always been my 3rd least favourite of Pixar’s films, above Cars and Cars 2 (which I’ve yet to see).

2. The Goonies
This is one of the finest examples of a film suffering from so much hype before I saw it, that it had no hope whatsoever of meeting my expectations. I didn’t see The Goonies until I was 18 and in my first year of university. I’d heard for many years what a classic it was, how much it had meant to my friends growing up and how their perfect idea of a night in was this and a big bowl of popcorn, so understandably I was expecting a good film, but instead I was treated to a bunch of annoying kids who refused to shut up as they set out on a treasure hunt. My own personal theory, after discussing this with a few others who share my feelings for the film, is that The Goonies is best watched before you reach the age of 15, preferably with friends of the same age. Do this, and you’ll love it, but watch it a day too late and it’s a phenomenon that’ll have just passed you by, never to return. Also, I was never exactly a small kid, so the hardships endured by Chunk brought back a few too many memories.

1. Pulp Fiction
Hang on, hang on, hang on, don’t lynch me just yet. I love this film. It’s got everything; a great cast, awesome direction, interesting narrative structure, and it’s bloody entertaining with one of the most quotable scripts ever. So why is it here? Well, this is a personal thing. The first time I watched this film was when a friend of mine (he shall remain nameless, but he knows who he his, and he probably doesn’t read this, mainly because I question his ability to read). Said friend believed that, instead of showing me the film in Tarantino’s opted chopped-up order, he would re-order it himself, by skipping or back-tracking through scenes on the remote. You might be thinking, and would be forgiven for doing so, that he put it into chronological order. This would make a certain kind of sense, but is still a stupid thing to do, but no, he didn’t. He put the scenes into his own insane order, skipping some entirely. I think Harvey Keitel’s Wolf only got a brief look-in, and his strand is arguably the most entertaining. And so it is that whenever I now watch this film, which is far less often than I’d like, I am constantly reminded of the unspeakable crime done to me by this friend.
Honourable Mentions
Point Break
Top Gun
Withnail & I
Leon
Easy Rider