Skip to primary content
Last weekend was Queen Elizabeth II’s Diamond Jubilee. I’ve mentioned before that I’m no Royalist, but it got me thinking as to the cinematic world’s greatest rulers, so let’s have a look at the top movie monarchs. I’ve broken this down into real and fictional.

5. (Real)
Queen Elizabeth II (Helen Mirren), The Queen
She’s got to be on here somewhere, seeing as it was her jubilee and all, so Lizzy sneaks onto the list in 5th place, more for Helen Mirren’s performance as the repressed, taciturn leader who is put to the test by the media in the days after her former daughter-in-law Diana is killed in a car crash. 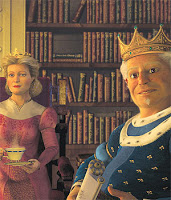 5. (Fictional)
King Harold & Queen Lillian, (John Cleese & Julie Andrews), Shrek 2 & 3
As the King and Queen of Far, Far Away, all Harold and Lillian ever wanted was for their daughter, Princess Fiona (Cameron Diaz), to marry a handsome prince and live happily ever after, and were willing to sacrifice her freedom to do so, leaving her locked away in a castle guarded by a giant fire-breathing dragon to entice eligible bachelors along. They don’t sound like the greatest people in the world, but when Fiona shows up with an ogre on her arm, they eventually, begrudgingly in the case of Harold, accept their new son-in-law for what he is. Also, in Shrek 3, King Harold has one of the funniest protracted death scenes in film. And he’s a frog. 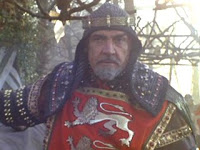 4. (Real)
King Richard I (Sean Connery), Robin Hood Prince of Thieves
Though he’s barely in it, and was reportedly paid $250,000 for two days works (which he apparently gave to charity), Connery’s last reel cameo provides a great payoff as a reward for enduring the two hours before he shows up at the wedding of Robin Hood (Kevin Costner) and Marian (Mary Elizabeth Mastrantonio). 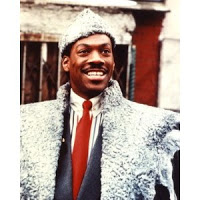 4. (Fictional)
Prince Akeem (Eddie Murphy), Coming to America
Other than abandoning his people in the fictional African country of Zamunda to find a bride amongst the American public, Akeem is a pretty good bloke. He turns down the opportunity to have an arranged marriage with a woman trained to obey his every command, preferring instead to marry a woman he respects, and who will love him without knowing of his status. He is even willing to give up his title when he meets Lisa (Shari Headley), the daughter of a fast food entrepreneur.
3. (Real)

King George VI (Colin Firth), The King’s Speech
When the role is forced upon him by his brother (Guy Pearce) abdicating in favour of marrying an American, George reluctantly mans up and, despite a crippling stammer, struggles on to lead his country through the second world war. Assisted by his wife (Helena Bonham Carter) and a speech therapist (Geoffrey Rush), George went on to overcome his speech impediment, made all the more important by the advent of radio, through which he was able to address the nation in their time of need. 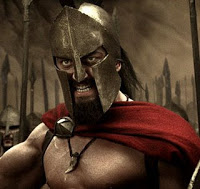 3. (Fictional)
King Leonidas (Gerard Butler), 300
Easily the buffest ruler on this list, and the one capable of making me feel like less of a man, Leonidas, along with 299 of his fellow Spartans, willingly takes on an entire army of Persians when their leader Xerxes attempts to claim Sparta for his own. Leo’s having none of that though, gleefully dispatching thousands of attackers with a mix of brute strength, masterful tactics, accomplished combat skills and the ability to eat an apple whilst fighting. 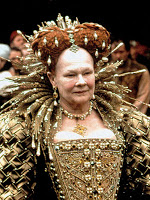 2. (Real)
Queen Elizabeth I (Dame Judi Dench), Shakespeare in Love
Another case of the monarch barely being on screen, Dench won a Best Supporting Oscar for barely 8 minutes of screen time, yet she left a greater impact than the lead, Gwyneth Paltrow. Dench’s Elizabeth is essentially responsible for many of Shakespeare’s works, providing him with inspiration and funding for Twelfth Night, and she’s also refreshingly frank for a royal. 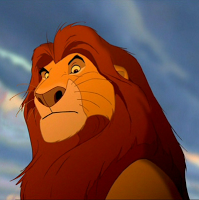 2. (Fictional)
Mufasa (James Earl Jones), The Lion King
He’s a lion, voiced by Darth Vader. Do I really need to say anymore? Fine. Under his reign, he not only holds his pride together and his villainous brother at bay, but somehow manages to control an entire ecosystem and maintain its perfect harmony. When, alas, he isn’t around anymore, the luscious world he used to rule becomes a barren, hyena-prowled wasteland presided over by Scar. A king who can control not only the weather, but the entire circle of life, without opposable thumbs? I’d say that’s a pretty good king.
1. (Real) 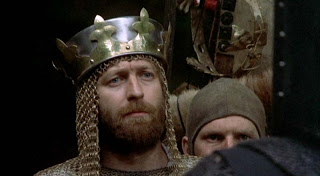 King Arthur (Graham Chapman), Monty Python and the Holy Grail
Let’s face it, these days the royals don’t really do a lot. They’re a symbol more than anything, essentially just another batch of celebrities for the paparazzi to photograph when out and about. So, what better kind of monarch is there in this day and age than an entertaining one, and who is more entertaining than a buffoon? Chapman’s King Arthur goes on a ridiculous quest in search of the fabled Holy Grail, with a merry band of memorably daft cohorts and an aide who persistently bangs coconuts together because they don’t have any horses. He’s a man of the people (“Bloody peasant”), has an extensive knowledge of birds, especially swallows, and can dispatch the evil Black Knight, but he can’t count up to three.

1. (Fictional)
Alien Queen (Stan Winston), Aliens
She’s not much to look at, but the alien queen will do anything for her subjects. She spends every moment of every day laying eggs to further their numbers, until some self righteous bitch comes along and tries to kill her, threatening the lives of everyone she’s birthed so far. You can hardly blame the queen for fighting back, and she’s even willing to negotiate an elevator and cling to the outside of a spaceship to stop any more massacres.
Honourable Mentions
Prince Edward (James Marsden), Enchanted
Princess Buttercup (Robin Wright), The Princess Bride
Princess Bala (Sharon Stone), Antz
Princess Atta, Princess Dot & The Queen (Julia Louis-Dreyfus, Hayden Panettiere, Phyllis Diller), A Bug’s Life
Aragorn (Viggo Mortenson), The Lord of the Rings
King Kong, King Kong
Princess Leia Organa (Carrie Fisher), Star Wars
Goblin King (David Bowie), Labyrinth
Red & White Queens (Helena Bonham Carter & Anne Hathaway), Alice in Wonderland

And the worst (Real):
King Edward I (Patrick McGoohan), Braveheart
Now this being a film in which the Scots, led by Mel Gibson’s William Wallace, are the heroes, it shouldn’t be too much of a surprise that the English are depicted in a less than flattering light, and their King especially is made out to be a complete dick. Edward, or Longshanks as he is known, decrees that English knights may sleep with Scottish brides on their wedding days, leading to the capture and execution of Wallace’s new wife. Longshanks plan is to send over Princess Isabella of France to attempt negotiations, so that Wallace will kill her and incite war with France. Generally, he’s not a very nice person.
(Fictional):

Queen Amidala (Natalie Portman), Star Wars Prequels
It’s hard to tell what’s worse, her leadership skills or her dress sense, though seeing as she rules whilst still a teenager, both can be excused. Under Amidala’s command, she manages to make Darth Sidious, aka Emperor Palpatine, become the Supreme Chancellor of the Galactic Senate, transforming it into the Galactic Empire and making himself its dictator. Not only that, but she stands idly by whilst Anakin, her eventual husband and father to her children, becomes Sidious’ apprentice Darth Vader.