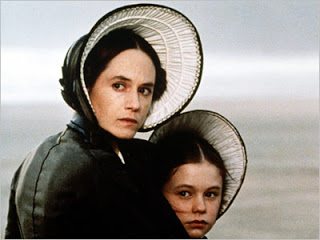 First off, an apology for the forthcoming review. I watched the film three months ago, and have gotten so far behind on my post writing that I’ve not had any real desire to review it, as to be honest it wasn’t that inspirational of a film. Nonetheless, I shall do my best, but I’m relying almost solely on the notes I made during the movie, as I can’t for the life of me remember very much of it. As you can probably guess, this isn’t going to be much of a recommendation to watch the film.
Holly Hunter plays Ada McGrath, a woman who, aged six, willed herself mute, and has since never spoken a word. She moves from Scotland to New Zealand for an arranged marriage with Sam Neill’s landowner/writer Alisdair, and brings her young daughter Flora (Anna Paquin in her first live action picture) and their piano, Ada’s pride and joy. Neill is less than impressed with his new bride-to-be (“You’re small, I never thought you’d be small”), and refuses to cart her piano across the difficult swampland between the beach and his home, so they abandon it on the sand, much to Ada’s discontent. Fortunately local plantation worker George Baines (Harvey Keitel) takes a shine to Ada, and trades some land with Alisdair for the piano, and agrees to trade it back to Ada in return for ‘piano lessons,’ during which George will get to know Ada far more intimately than she’d like.
Hunter and Paquin both won Oscars for this film, and Hunter at least thoroughly deserved hers (Paquin is excellent for an 11 year old, but though I haven’t seen any of the performances she was nominated against I wouldn’t be surprised if any of the actresses, including Emma Thompson and the aforementioned Hunter, performed more capably). Hunter’s Ada is utterly repressed, yet still emotive and expressive, all pursed lips and passive eyes, her skin a deathly pale against the stark black of her dresses and bonnet. Keitel is also good, though his proclivity for whipping his pecker out is always a distraction, and is for the most part unnecessary.
I got the feeling that the film was made to prove the point that a lead character doesn’t need to speak (see also: Dumbo). There isn’t too much of a story here, with the events built entirely around the character and her very existence rather than the exciting or emotional events in her life. Her character is well realised, especially the bond with her daughter, and her slowly breaking down walls against Baines’ advances. Communicating only through sign language, facial expression and a small chalk-board locket, she says more than any other character, and with far less.
Despite the poetry of the film, such as Keitel’s Baines being willing to just sit and watch the piano hammers dancing gaily along the strings, I didn’t take much away from this film, and it has had little to no lasting impact on me. It’s very slow, and the message is muddled, though I think it has something to do with choosing the correct way to woo someone. Alisdair goes about things in entirely the wrong way with Ada. If only he’d coerced her into, essentially, prostitution, he’d have been much better off. Oh, and the best part about the film? It features an actress called Geneviève Lemon.
Choose life 6/10

5 thoughts on “The Piano”