Skip to primary content
It’s Bill Murray’s birthday! The guy is a prime contender for a future Film-Makers Career Review, but until I see all of his work, here’s my favourite of his films. Now, in my looking back at his career I noticed Murray has tended towards two kinds of roles, leads/major parts, or brief cameos, so I’ve made two lists to celebrate this fact:

5a. Caddyshack
I’m fairly sure the main reason this film is remembered as a comedy classic – by me at least – is because of Murray’s breakthrough role as the deranged gopher-hunting groundskeeper Carl Spackler. His scene in his shed, talking to the little clay models of squirrels and rabbits he intends to use to destroy the golf course terrorising rodent is just wonderful, even if the gopher himself looks like one of the worst puppets ever put on screen.

5b. Get Smart
OK, so the film is pretty terrible, but Murray’s cameo as the tree-dwelling lonely sad sack Agent 13 in this lacklustre spy reboot is one of the few watchable moments, and came as such a surprise to me when I watched the film that it almost made the experience worthwhile. Almost.

4a. Scrooged
How do you remake Charles Dickens’ Christmas Carol? With Muppets of course! But if they aren’t available, Bill Murray will do as well (as long as he brings Bobcat Goldthwaite and Robert Mitchum along too). Murray is brilliant as the TV exec in need of a bumper dose of Christmas spirit, and brings some much needed sarcasm to Dickens writing.

4b. The Darjeeling Limited
An underrated Wes Anderson film, I’m actually quite fond of this story of three brothers, Owen Wilson, Jason Schwartzman and Adrien Brody, who bond on a trip across Indian on the titular train. Murray legally has to appear in every Anderson movie, but here his presence is briefly but memorably felt as a businessman who isn’t quite as fast as Adrien Brody at the start of the film. The look the two share as the film’s story is passed from one man to the other should be the moment where you realise whether this film is for you or not.

3a. Kingpin
This is another film that I think is grossly underrated, though like Caddyshack the best parts involve Murray, in a rare antagonist role, as the nemesis to Woody Harrelson’s Roy Munson. The real star of course is Murray’s increasingly dishevelled come-over in the finale, and the film really lights up when he is on screen, though that’s nowhere near often enough for my liking.

3b. Space Jam
A classic from my childhood I’d almost forgotten Murray was in. Unusually, Murray has actually played himself, or versions of himself, in at least four films, here playing Michael Jordan’s golfing buddy who volunteers to help save the world from some cartoon aliens with the help of Bugs Bunny, Taz and the rest of the Looney Tunes. Yes, it’s a kids film, but it’s a kids film I freakin’ love.

2a. Ghostbusters
I used to think that Bill Murray was the real star of the classic 80s sci-fi/comedy, but on repeat viewings it is Dan Aykroyd’s Stantz who steals the show with his boyish energy and naivety. The film would be almost nothing without Murray though, who certainly has some of the best lines and scenes (getting slimed of course), and a brilliant romantic subplot with Sigourney Weaver. The sequel was nowhere near as good, but doesn’t get as much credit as it deserves. 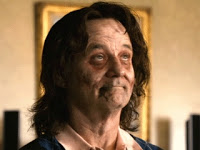 2b. Zombieland
The cameo I wasn’t sure if I should ruin, as it’s one of the film’s biggest joys, but I can’t really make this list without it. Zombieland would have been a great zom-com even without Murray, but his late-second-act appearance just topped the cake’s icing with a zombified cherry. Yes, it’s a shame his role was tiny, but it had to be, and allowed for one of my favourite line’s ever, when he’s asked if he has any regrets, Murrays response is simply “Garfield, maybe.” 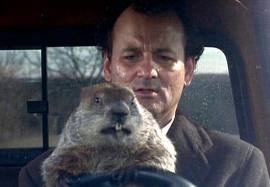 1a. Groundhog Day
Not just Bill Murray’s greatest film and role, but hands down one of the best films ever made and a surefire Guaranteed Happiness future post. I love Groundhog Day, and I’d happily watch it every day, if it weren’t for the thousands of other films I have to watch as well. Murray is absolute perfection as the selfish, sardonic weatherman stuck in Punxsutawney, Pennsylvania for the annual Groundgog Festival, but ends up reliving the same terrible day over and over and over again – it’s been calculated to be in the 1,000s – until he learns to be a better person. Unthinkably, Tom Hanks was originally cast in the role, but thankfully director Harold Ramis changed his mind because Hanks was just too nice. It’s a good job too, as no matter how much I like Hanks, I really don’t think he could have pulled off the complete dick Phil Connors is at the start of the film. Too early for flapjacks? 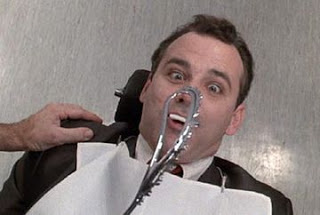 1b. Little Shop of Horrors
Yep, it’s made it to the top of another Top 5 list, but Little Shop of Horrors is just a classic, and is I think the only film to see Steve Martin and Bill Murray share the screen simultaneously, in the unforgettable dentist scene. Replacing Jack Nicholson, from Roger Corman;s 1960 version takes a particular kind of talent, and Murray was an inspired choice. From his childish glee as he skips into the dentist’s office to his orgasmic screams at the climax of his root canal, it really his professionalism that I respect.