Dinosaurs! It’s no surprise to anyone that I love me some prehistoric beasties. I can probably trace my love of dinosaurs back to the child I’ve never really stopped being, but there’s something about the fact that these giant, terrifying creatures once ruled the very land we walk upon that captures my imagination. Sadly, dinosaurs have become somewhat scarce out in the real world in recent millenia, so the best place to see them at their finest is in the movies. This list is probably one of my least surprising, especially the top 2, as they’re films I rarely go a day without mentioning, but the list was an inevitable one, and I was at a loss for what else to do this week, so here it is:

5. Ice Age 3: Dawn of the Dinosaurs
I think the Ice Age movies have been cruelly ignored, deemed ‘lesser animation,’ and basically dismissed by many people who haven’t seen them. Whilst they’re certainly nowhere near as good as most of Pixar’s output (but then, what is?), the Ice Ages are actually worth your time. Part three, The Dawn of the Dinosaurs, though not technically historically accurate, is probably my favourite of the bunch (I’ve not seen part four, Continental Drift, yet), and whilst including dinosaurs probably didn’t hurt it’s cause, the main reason I like it most is Simon Pegg’s deranged one-eyed ferret Buck. I’d also like to use this opportunity to complain about Ice Age 2: The Meltdown. At one point, the herd (comprised of Ray Romano’s Manny the mammoth, John Leguizamo’s Sid the sloth, Denis Leary’s Diego the sabre-tooth tiger, Josh Peck and Seann William Scott’s possums Eddie and Crash and Queen Latifah’s Ellie the mammoth-who-thinks-she’s-a-possum) encounters an expanse littered with erupting geysers. Manny wants to cross, but Diego warns him that “It’s a minefield out there!” The one part of this film’s suspension of disbelief – of which quite a lot is required – that I just cannot overcome is how exactly does Diego know what a minefield is? Small gripe, I know, but it never stops annoying me whenever the film is on TV.

4. Jurassic Park: The Lost World
This is a bit of a spoiler for a later entry in the list, and I think it goes against general consensus, but I quite like Jurassic Park: The Lost World. Whilst it’s not a patch on the original, it still has some great moments, most notably the trailer dangling off the edge of a cliff, the hunting sequence and “Stay out of the long grass!” Plus, compsognathus, the little mini-raptors, are one of my favourite dinosaurs, so Peter Stormare’s death by their tiny little mouths is possibly my second favourite in the series, after Gennaro on the toilet. Add to this Julianne Moore, Richard Schiff, Vince Caughn and Pete Postlethwaite as one of my favourite badasses (not quite beating Bob Peck, but giving it a good go), and the return of Jeff Goldblum as Dr. Ian Malcolm. There are some annoying moments – apparently the once invincible raptors can be easily defeated by a girl doing gymnastics, and how exactly did the T-Rex stay in the hold of the ship? – but there’s more than enough great here to make up for the mediocre. It should never have left the island though. 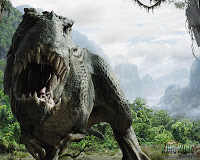 3. King Kong
I’ve yet to meet someone who likes this film quite as much as I do. It could be because I haven’t really seen the 1933 original properly (or the Jeff Bridges 1976 remake), or it could be because when I first saw it I was going through a CGI-mad faze, but I’ve never understood the hatred this film received. I don’t consider it too long, nor do I feel that too much time is taken to get to Skull Island – I appreciated the character setup and buildup of anticipation before the action is unleashed. Also, the Kong vs. three V-rexs battle is just epic beyond belief, on a scale I’d never seen before or since. The fights are extremely well choreographed and filmed, with a kinetic camera showcasing director Peter Jackson’s impressively cinematic eye. The shot of a dinosaur subtly emerging behind Naomi Watts’ Ann Darrow gets me every time, and if I had one criticism it’s that there could be some more Kong on reptile action, or maybe even Adrien Brody vs dinosaur, in a similar set-piece to Legolas taking down an olyphant in Return of the King. But then, the film’s called King Kong, so any more story without him in it could have taken something away.

2. Toy Story Trilogy
Rex is, [tiny little] hands down,  my favourite movie dinosaur. It certainly helps that he’s in my favourite movie trilogy of all time, but he is part of the reason that makes it great. It’s the very fact that he is a tyrannosaurus rex yet has severe, crippling insecurities, most likely due to the shoddy plastic he’s made from and lack of posability in comparison to the likes of Woody or Buzz. Wallace Shawn perfectly encapsulates Rex’s desperate neediness, though that he does this by using his usual voice probably isn’t too much of a compliment. Toy Story 3 has the most dinosaurs for your buck, with Trixie the tech-savvy triceratops (voiced by Kristen Schaal) making an appearance, as well as several non-speaking dominant dino roles, allowing Rex to finally be the king lizard he was born for. 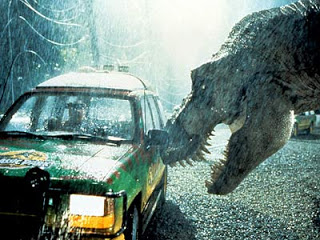 1. Jurassic Park
Another top 5 with a thoroughly unsurprising number 1. There really was no competition, with Jurassic Park topping pretty much every list it’s eligible for, and probably some that it’s not. This is my favourite film of all time (at the moment), and my watching of it recently was the inspiration for this very list. I honestly believe this to be the greatest movie ever made, especially based on pure entertainment value. It’s essentially a glorified monster B-movie, with a group of people becoming stranded on an island with no power or means of communication, and a load of man-eating dinosaurs running amok, including three velociraptors and a T-rex. I can think of very few ways to improve the film (sometimes I suggest killing the kids, as they do become very annoying at times), but there is no possible way I can ever sit through this film without a grin on my face bigger than the crest-span of a dilophosaurus. It’s a perfect example of both effects driven adventure (both CGI and mechanical), and a study in efficient film-making, most notably in the opening raptor encounter, where all you ever see of the carnivore is an eye through slits in it’s box, yet through Spielberg’s masterful cinematic sleight of hand every inch of you believes there’s a giant lizard fighting to break out of that container, burst through the screen and tear open your belly. Or at least, that’s what you think will happen, but remember, the attack doesn’t come from the front, but from the side…
Honourable Mentions
Night at the Museum
Dinosaur
Haven’t Seen
The Valley of Gwangi
Land of the Lost
Land Before Time Series
Journey to the Centre of the Earth

Worst: Jurassic Park 3
Naming Jurassic Park 3 the worst dinosaur film of all time may seem a little harsh, especially when the accolade could be given to the likes of Dinosaur or Night at the Museum, but whilst this way not necessarily be a terrible film, it still manages to drop one big pile of shit upon what would otherwise be one of my favourite franchises. Joe Johnston, him of the disappointing Captain America and The Wolfman, but the pretty good Jumanji, is at least partly to blame for this travesty, as he manages to commit the cardinal sin of making the dinosaurs the enemies. In part 1, the dinosaurs were definitely the antagonists, but were just following their instincts, leaving Wayne Knight’s slobbish Newman, sorry, Dennis Nedry, to be the proper villain. And there’s no denying that in The Lost World Peter Ludlow’s pathetic Arliss Howard is thoroughly deserving of his grizzly end, but here the closest we get to a bad guy is the giant, finned spinosaurus, who seems to stalk our protagonists, led by Sam Neill’s reluctant Dr. Grant, on some kind of vengeance mission. What we need is a human to hate. Some nefarious individual with plans that don’t necessarily have mankind’s best interests at heart. The film’s only redeeming feature, other than casting Michael Jeter as the world’s most unlikely butch character, is the inclusion of pterodactyls, offering another direction for giant teeth to attack from. One shot, in which hazy scenery suddenly turns it’s head to reveal a great winged beasty, is particularly impressive, and almost makes the film worthwhile.