Today was a big event in the movie calendar – the nominations were announced for the 2014 Oscars – and as I had some thoughts on the matter, I thought what better way to express them than in a post devoted to them? Bearing in mind I haven’t seen most of the films up for nomination – in fact, at least 6 of the bigger ones haven’t even come out over here yet – you can pretty much disregard everything I’ve written below.
First up, Best Picture. As is becoming tradition, nine films have been nominated out of the maximum ten, and so far I’ve only seen two; American Hustle and Gravity, neither of which I’m surprised to see here, but neither of which I’d have minded if they weren’t included. I’m delighted to see Her, Nebraska and Philomena, all relatively smaller films, getting some apparently well-deserved recognition. I have utterly no clue who will win this, as it seems quite an open field at this stage. I’d have liked to see Inside Llewyn Davis and The Secret Life of Walter Mitty in there too, as I had high hopes for them, and I’m very disappointed that Saving Mr. Banks didn’t make the cut, as I was positive that was going to, and I thought it might even have won. It seems this will not be the case.

Best Actor in a Leading Role: I think this was the hardest category for the year, and if the number of nominees were doubled I doubt many people would have complained about the choices. Alongside the five nominees (Christian Bale, Bruce Dern, Leonardo DiCaprio, Chiwetel Ejiofor and Matthew McConaughey) you could quite easily add Robert Redford (All is Lost), Tom Hanks (Captain Phillips), Joaquin Phoenix (Her), Idris Elba (Mandela: Long Walk to Freedom) and Mads Mikkelson (The Hunt), none of which I’ve seen. I think either Ejiofor or McConaughey will win. I hope Christian Bale doesn’t win, as in the acting stakes I thought he was the weakest link of the five main actors in American Hustle.

Best Actress in a Leading Role: Amy Adams, on the other hand, thoroughly deserves her nomination here, though I think Cate Blanchett will win for Blue Jasmine. I am appalled at the snub for Emma Thompson, whose P.L. Travers in Saving Mr. Banks was my favourite performance from last year, and I thought she was guaranteed a nomination. She should have either Sandra Bullock of Meryl Streep’s nomination (I haven’t seen August: Osage County, but Streep has had plenty of nominations by now, and just because she has been in a film does not mean she needs a nomination).

Best Actor in a Supporting Role: I have no issues here, other than I don’t like Jonah Hill and don’t want him to win, regardless of whether he deserves it  or not (haven’t seen The Wolf of Wall Street yet, it comes out tomorrow). I’d heard good things about Will Forte’s performance in Nebraska, so I thought that might have been included, but I’m glad Tom Hanks wasn’t nominated for Saving Mr. Banks, as had been rumoured, because whilst his Walt Disney is good, it isn’t awards-worthy. This prize is Jared Leto’s to lose.

Best Actress in a Supporting Role: Again, no issues, and I have no idea where this award is going. The general consensus seems to be Jennifer Lawrence for American Hustle, as she won the Golden Globe, but I found her to be very annoying in that film, and I’m still annoyed she won for Silver Linings Playbook last year over Naomi Watts for The Impossible.

Best Director: Yay for Alexander Payne! Other than that, no thoughts.

Adapted Screenplay: And I thought Saving Mr. Banks might have been in here.

Best Animated Film: This is the biggest upset for me. I haven’t heard of Ernest & Celestine or The Wind Rises, which I think is the most recent Studio Ghibli picture, and I have no issues with them. Nor do I have a problem with Frozen, as I’ve heard nothing but great things and really want to see it myself. No, where I have a problem is with nominations for The Croods and Despicable Me 2, both of which were mediocre at best, whereas Monsters University, which was amazing, doesn’t get a look in. Considering at this moment in time it sits in my top 10 of last year, and none of the rest of the 10 are animated, then I’d thought this was guaranteed a nomaintion, and would be the only real competition with Frozen for the win. I’d also have liked a nomination for Cloudy With A Chance of Meatballs 2, as I have high hopes for it. I suppose it could all be worse and the likes of Epic, Free Birds, Turbo or Planes could have been nominated.

Best Makeup and Hairstyling: I love that someone had the audacity to submit Jackass Presents: Bad Grandpa for an academy award, and I only hope they submitted it for other categories too. Johnny Knoxville for Best Actor, anyone? Also, this was the one category I thought American Hustle would have been a certainty, what with the cavalcade of hairstyles going on, so I’m shocked to see it absent here.

Best Cinematography, Sound Mixing and Sound Editing: I am appalled that Stoker received a grand total of zero nominations, as the visuals and audio for Chan-wook Park’s chilling drama were some of the best I’ve seen all year. 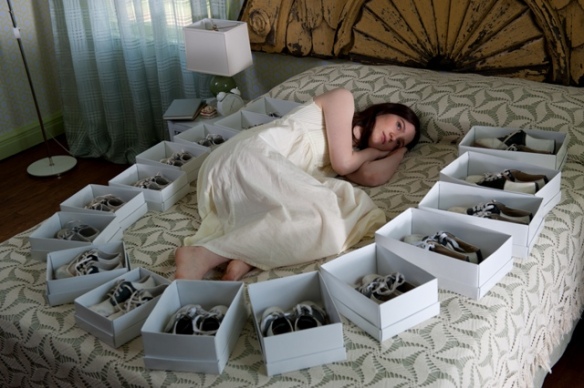 Best Visual Effects: Regardless of what I may have thought about the film, I’m stunned that Pacific Rim didn’t get nominated for its stunning visual effects. The Lone Ranger cannot possibly have been better, and Star Trek Into Darkness certainly wasn’t.

So, that’s my thoughts on the Oscar nominations. Let me know what you thought below.

7 thoughts on “Thoughts on the 2014 Oscar Nominations”