This post was originally written as part of my Road Trip series over at French Toast Sunday.

Mike (River Phoenix) had a tough upbringing, not helped by being both homosexual and narcoleptic. Teenage and alone amongst the barren fields of Idaho, he moves to Seattle and becomes a street hustler and male prostitute, gaining friends amongst the small group of similarly disadvantaged youths in the same profession. Amongst these is Scott (Keanu Reeves), a Mayor’s son and the heir to his father’s fortune, but who is rebelling and living on the streets instead. When their squatting home is raided by the police, Mike and Scott begin a search for Mike’s mother, taking them on a journey back to Idaho, and eventually to Rome. 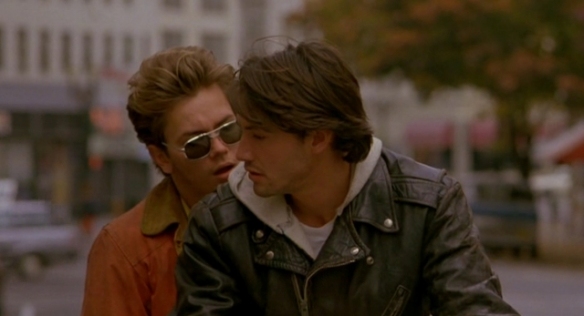 I don’t think my state-assigning research was thorough enough for this pick as, despite Idaho being right there in the title of the film, I’d estimate a little over a third of the story takes place in the potato state, with arguably more time being spent in Seattle, which annoyed me because I’ve already done Washington. It would seem I need to look further than the title, so rest assured if I ever attempt a similar challenge on a global scale, my selection for Hungary won’t be The Grand Budapest Hotel.

As a director, Gus Van Sant has a lot of range. For every Oscar-winning audience-adored drama like Good Will Hunting or Milk there’s a more experimental, critically acclaimed piece like Elephant or Gerry. My Own Private Idaho definitely sits in the latter camp, as I didn’t see a lot here that would be terribly crowd-pleasing, beyond the performances from the two leads. Overall it’s a jumbled mess of plot strands and unresolved wild goose chases that left me more confused than satisfied. I imagine this may have been intentional, what with the main protagonist regularly finding himself in a similar frame of mind when he awakens in a strange location after his latest narcoleptic attack, but as a narrative I was left wanting. 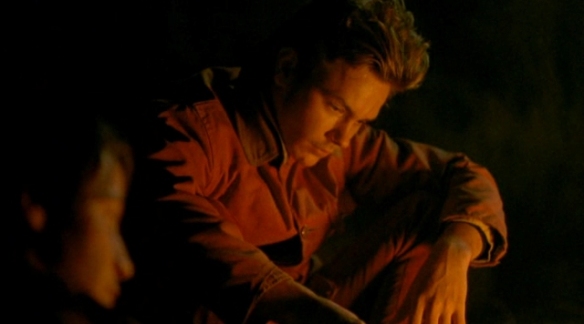 Before embarking upon this road trip, River Phoenix was not an actor I wasn’t very familiar with. I’d heard a great deal about this Heath Ledger-like monument to wasted talent; showcasing a tremendous amount of potential before departing the world sickeningly early in his life, but I’d only seen him in Sneakers and Indiana Jones and the Last Crusade, neither of which really showcased how amazing this kid was supposed to be. Now, however, I can chalk up Stand By Me and this movie to his list, both of which add a great deal in his favor. Here Phoenix is wonderful, and does a great job of emoting the hardship he endures. The big surprise, however, is Keanu Reeves. Before watching the film I was fully prepared for my review to feature some kind of a comparison between Reeves’ acting ability and that of a jacket potato, and in fact I essentially sat watching the film with my arms folded, glaring at the screen, silently challenging it to even try and impress me with whatever Neo was going to do. I will freely admit that I was wrong, and this is the first film, other than the Bill and Ted classics, where his presence hasn’t made a conceited effort to ruin the entire movie for me.

However, that’s pretty much all the compliments I have for the film, because I really didn’t enjoy this. Well, maybe that’s a little strong. I didn’t necessarily dislike the film, I just found it very hard to appreciate. It gave me quite a strong “arthouse” feel, which by and large isn’t my preferred style of film, and the myriad dream-like flashbacks and visions didn’t help either. Mike’s exploits with his various Johns and Janes at work could have quite easily been dream sequences too – Udo Kier dancing with a table lamp will forever be seared into my consciousness, in a file alongside the similarly bizarre video to Electic Six’s Danger High Voltage. My problem, I think, is that I just didn’t “get” the film. Apparently large chunks of it are homages to Orson Welles’ Chimes at Midnight and Shakespeare’s Henry IV Parts 1 & 2. Unfortunately I’m unfamiliar with these works, as I’ve not seen Chimes and, despite owning a set of the complete works of Shakespeare, I haven’t gotten to the Henrys yet. Perhaps once I’ve absorbed these slices of culture I’ll be privy to a greater understanding of the film at hand, but alas as yet I’m still in the dark. 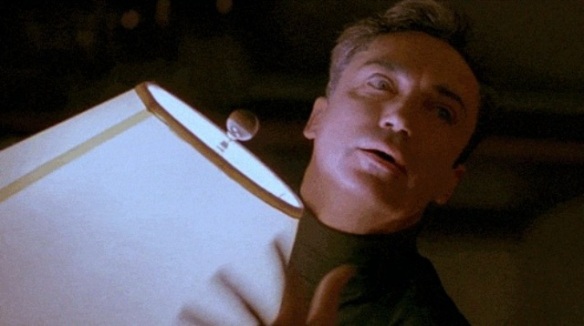 I’ll admit that Van Sant’s direction is often innovative and creative, yet rarely in a way that helps the film. There’s a couple of sex sequences – the guys are male prostitutes after all – but instead of showing the sex we’re treated to montages of what initially appear to be images of the various acts enjoyed by the participants including, but not limited to, nipple clamps, toe sucking and what appears to be a naked and even less comfortable form of Twister, but are in fact video footage of the actors holding the position for a few beats before moving on. I cannot fathom why this has been done, but it has nonetheless. 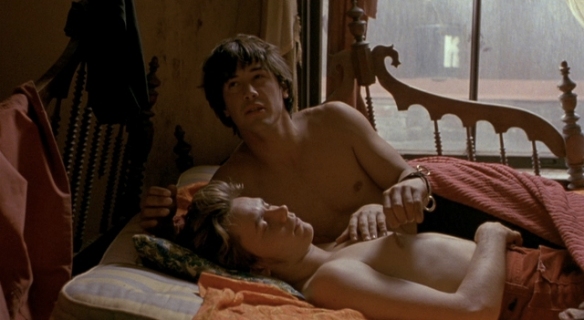 This film is kind of like someone put Midnight Cowboy, Oliver! and Slacker into a blender. Phoenix’s Mike suffers from the same fantasy of male prostitution that plagued Jon Voight’s Joe Buck in Cowboy, whilst an entire sub-plot revolves around the boys’ involvement with a Fagin-like ringleader of their hustling crew, played by William Richert. The Slacker element comes from various scenes where some of Mike and Scott’s acquaintances recount pointless stories that don’t tend to go anywhere. The stories provide a little insight into these minor characters’ back stories, but as this is essentially the first and last time we have any dealings with these people, it’s really hard to care.

That sentiment kind of sums up my feelings towards the film as a whole – I just don’t care about it. Other than the aforementioned Udo Kier dance number and a couple of other scenes – Mike and Scott having a conversation as magazine cover models, Mike screaming at his older brother Richard (James Russo) that he knows Richard is not just his brother, but also his father – I sincerely doubt I’ll ever think about this film again. It could be because it’s more of an art film that the narrative-driven fare I greatly prefer, but either way I can’t recommend it.

3 thoughts on “My Own Private Idaho”