After his wife dies and his son grows up,  Shigeharu (Ryo Ishibashi) is encouraged to look for a new wife. A friend of his in the film industry suggests setting up an audition process, under the guise of looking for a star for a new movie, during which Shigeharu can scope out the perfect candidate. He is initially apprehensive of these underhand tactics, but eventually concedes and goes ahead. During the trials, it is clear one girl stands out; Asami (Eihi Shiina). The two meet up, but Shigeharu soon suspects everything with his new dream girl may not be as perfect as it seems. 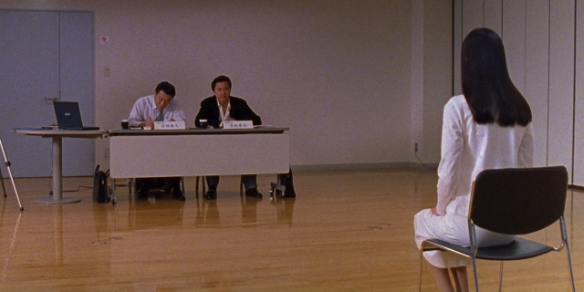 Audition won the Movie of the Month over at the LAMB back in October. I watched the film and recorded a podcast on it (listen to that here) and then kind of forgot a lot about the movie. However, in sorting through some old notes today I found my scribblings on this film, and realised that despite its inclusion on the 1001 Movies List, I hadn’t actually reviewed it. Seeing as I don’t particularly want to watch this film ever again, I figured I should probably jot something down and call it a day. As such, this wont be my most detailed review, it’s very much a case of ticking a box and moving on. 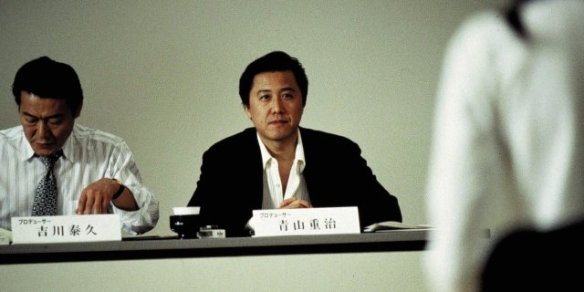 So, Audition. I’m not a fan of horror films, which was the category set out for the MOTM poll. Technically, Audition is less of a horror film and more of a psychological thriller, with some body horror and torture porn thrown in for good measure. Some sources claim this to be the originator of the torture porn sub-genre, which led to films such as Hostel (which I hate) and the Saw franchise (which, inexplicably, I don’t actually mind, especially the first one, which I genuinely believe is terrific). As it turns out, there’s not actually that much gratuitous gore in Audition, with almost all of it concentrated in the final act. Before then we’re subjected to over 40 minutes of a relationship drama, with Shigeharu trying to find a new wife and courting her, with his friend Yoshikawa (Jun Kunimura) having his doubts that something is a little “off” with his chosen girl. This was completely unexpected, as I’d assumed this would be horror through and through, but instead it isn’t until around the 45 minute mark when anything even remotely creepy takes place. However, when the creepiness hits, the creepiness fucking hits. Consider the spoiler warning to be blaring from this point on. 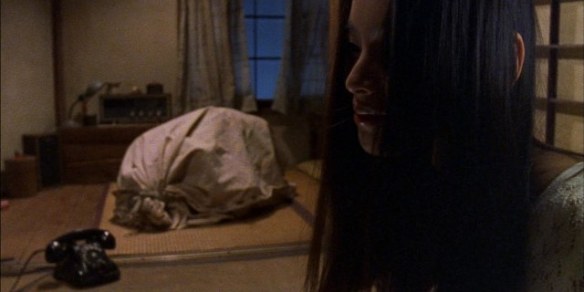 After Shigeharu meets Asami, she gives him her number. He eventually calls her – because why wouldn’t he? She’s met all of his requirements, and seems a perfectly fine human being who is just a little quiet – and then we cut to Asami, sat in a small, poorly furnished room by a phone, just waiting. In the background? A large burlap sack. A sack big enough to contain a man. The phone rings, and Asami reveals this small, satisfied smile. The kind of smile someone gives when the first step of a plan has come together and everything is going just how they’d intended. And then the fucking bag rolls around and squeals. It’s a jump scare, often regarded as the lowest form of horror, but sometimes it works, and that sometimes is right damn here. Later we discover that there is a man in that sack, a man missing a few fingers, an ear, his tongue and his feet, whose only source of sustenance is the occasional bowl of vomit, but the first time that bag seems to leap around it could be anything in there. The noises are not human, I initially thought it was some kind of monstrous pig creature, but nope, that’s a guy, being held captive for some crime against Asami. And that’s exactly what she plans to do with Shigeharu, under the belief that he regularly holds these kinds of auditions in order to have sex with the candidates. 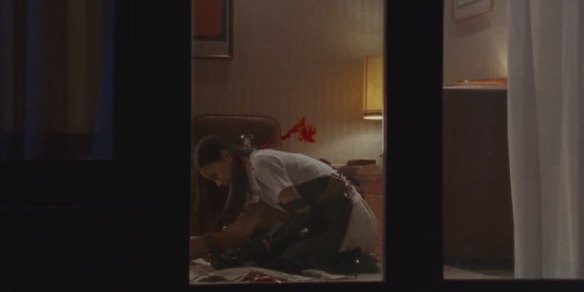 It all gets progressively creepier from there – there’s a nice build up of tension, as we know Asami to be crazy long before Shigeharu has pieced it all together, but the full extend of her mental depravity is slowly unveiled as he visits the known whereabouts he’s pieced together from her – a ballet studio inhabited by a man with boards nailed to his prosthetic feet, an office where Asami’s former boss was found chopped to pieces, only after her blood has run under the door and into the hallway – and then Shigeharu is drugged and knocked unconscious, which leads to a very trippy 15-minute dream sequence. That’s not the bit that worried me, although it was very creepy. No, I was concerned about the dog. Early in the film we discover Shigeharu and his son has a dog, a beagle I think. Knowing this had horror elements, I became very concerned for that dog’s well being, and as soon as a scene came wherein the dog was left at home alone, and cinematic clues were dropped that something was about to go down, well then I knew the doggy’s days were numbered, and that number was very small. The dog is killed (thankfully off screen, though we see the corpse), and Asami has rendered Shigeharu paralysed, but with the ability to feel pain heightened. Then comes the torture, involving inserting needles into his tongue, stomach and – ugh – eyes, each with a little flick to go with it. Every time she stuck a needle into the guy, Asami would go “Di-di-di-di-di,” which apparently means “Deeper” but actually just succeeded in creeping me the fuck out. It’s horrible. As is the gleeful grin she wears as she saws off Shigeharu’s feet with razor wire. Fortunately this all gives way to a fairly action-packed climax, and we’re spared too much of the grotesque-ness being displayed on screen. 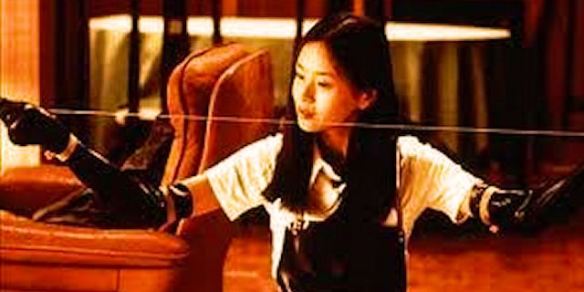 I didn’t like this film, and not just because of the horror and trippy aspects. The characters changed their minds on a whim – Shigeharu’s initial apprehension at the audition process lasts for a very short period of time, and disappears with little to no reasoning whatsoever. Other characters and situations are set up without ever going anywhere or being realised in a satisfactory manner, and there isn’t even enough torture or horror to satisfy those kinds of fans. I understand the importance in helping to influence many films that have come since, but in terms of recommending this one I’m afraid I just cant.