This review was originally written for French Toast Sunday as part of my USA Road Trip series. It was also nominated for me to watch by Ryan McNeil of The Matinee, and is my submission for August for his Blind Spot series.

Brooklyn, 1989. On a particularly sweltering summer’s day, racial tensions simmer amongst the everyday lives of the inhabitants of a single street. Central to everything is Mookie (Spike Lee), a young, black, pizza deliveryman, working for the Italian-American Sal’s Pizzeria, run by Sal (Danny Aiello). As the day progresses and the temperature increases, everything threatens to boil over, and does so in a life-changing way for all involved. 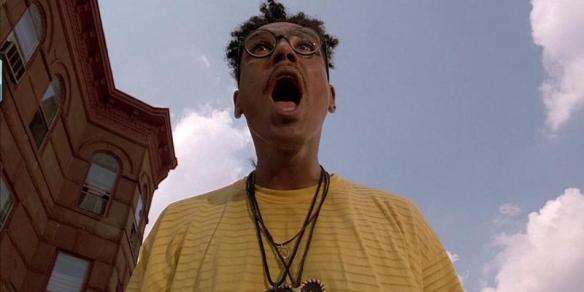 Do the Right Thing is only the second Spike Lee joint I’ve seen, and the only one that’s what I’d consider to be a more traditional Lee-type movie, with the only other one I’m familiar with being Inside Man. From the little I know of Lee and his work, he is a man keen to depict racial indifference on film, with it seemingly being the driving force behind most of his narratives, which is very much the case here. On this single stretch of street, with this cast of a couple dozen characters, there are two topics of conversation that can be heard; the heat, and race. 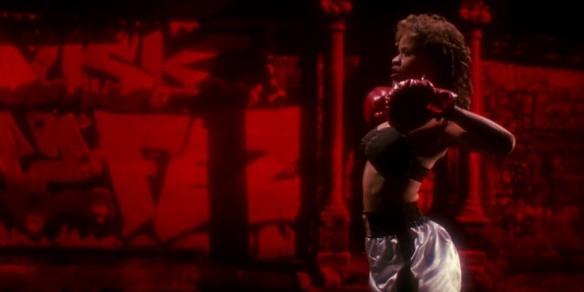 Firstly, there’s the Italian-American pizzeria. It’s run by Sal (Danny Aiello), who confesses to only setting the shop up in a predominantly black neighbourhood because those are the only ones without pizzerias, so there’s no competition. He’s been there 25 years, and most of his clientele are black, so he has problems with them. His eldest son Pino (John Turturro) on the other hand, has many racist thoughts punching each other in his head. Pino is mocked by his friends for working in a black area, is eager for his father to sell up shop and move elsewhere, and regularly gets into yelling matches with their black delivery boy, Mookie (Spike Lee). Pino’s brother Vito (Richard Edson, one of the guys who joyrides the car in Ferris Bueller’s Day Out!) is on much better terms with Mookie, and often finds himself at odds with his brother over this topic. Outside of Sal’s, there’s a Korean corner shop owner and his family, a trio of older black gentlemen who sit around all day drinking and complaining about life in general, an old, drunk, self styled mayor of the street (Ossie Davis), an ever watchful and ever disapproving old lady by the silly name of Mother Sister, who keeps an eye out from her window (Ruby Dee), two white cops (Rick Aiello and Miguel Sandoval), small groups of Hispanic and black kids (including the feature film debut of Martin Lawrence), Mookie’s friend Buggin’ Out (Giancarlo Esposito), who is mocked by pretty much everybody, but has a disagreement with Sal over the lack of black celebrities on his Wall of Fame, and Radio Raheem (Bill Nunn), who walks around blaring Public Enemy’s Fight the Power from his personal stereo wherever he goes, which is essentially just up and down this street. Oh, and there’s Mookie’s girlfriend and the mother of his son, Tina (Rosie Perez), Mookie’s sister Jade (Joie Lee), Smiley (Roger Guenveur Smith), a mentally disabled man trying to sell hand-coloured photos of Martin Luther King Jr. and Malcolm X, and of course Samuel L. Jackson presiding over everything as Mister Señor Love Daddy, the radio presenter broadcasting street-side for a full 12 hour stint, every day. That’s our cast of character, all you need to do now is add temperature and occasionally stir. 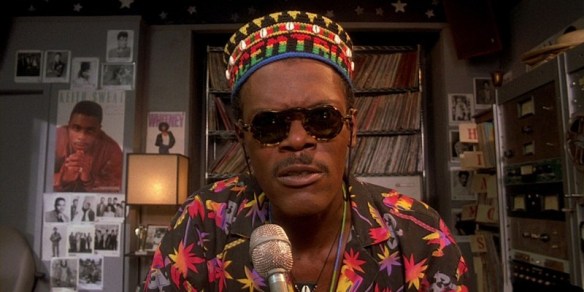 I do enjoy a good ensemble piece, following the lives of various characters as they intersect with one another over a limited period of time. Magnolia comes to mind as maybe the best example, certainly my favourite, and I’ve got a lot of time for the likes of Robert Altman’s Short Cuts, and even Paul Haggis’ Crash, which I think gets a lot of undue kicking because it beat Brokeback Mountain for the Best Picture Oscar. Where Do the Right Thing differs from, and what in my eyes makes it inferior to those other films, is that in all those other examples each character or group of characters has their own narrative drive through the picture, their own storyline to follow, whereas here there’s two or three overall arcing plots that some people get involved with, and others spectate from on the side or avoid almost entirely. I’ll admit this is very much a personal issue rather than a proper criticism, but it helps to explain why I didn’t love this film as much as others seem to. When characters are given as much time as some are here, I’d hope it would be to the eventual end of them doing something and being involved somehow, which wasn’t always the case. 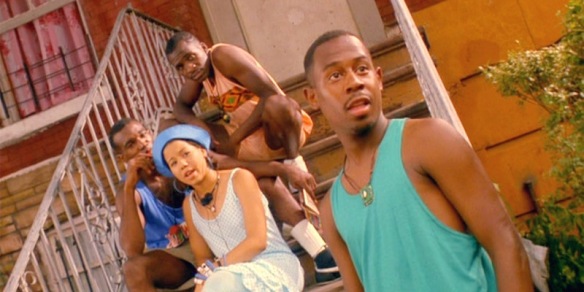 Hip hop music, which back in 1989 I understand was yet to fully permeate the popular culture as much as it has today, plays a large role in the proceedings here, which again might add to my overall disinterest. Primarily, the character of Radio Raheem plays Fight the Power on repeat, wherever he goes, out-playing other peoples’ radios and even blaring it out when he goes into Sal’s. However, such is my universal deafness to hip hop that it was not until Raheem had been playing the same song for a few scenes that I realised he was playing the same song over and over. It all just kind of sounds very similar to me, especially when the lyrics are difficult to make out. I’ve never been terribly musically inclined, so apologies to all involved, it’s just not a type of music I find easy to differentiate from itself, which made all the soundtrack choices here feel very repetitive. 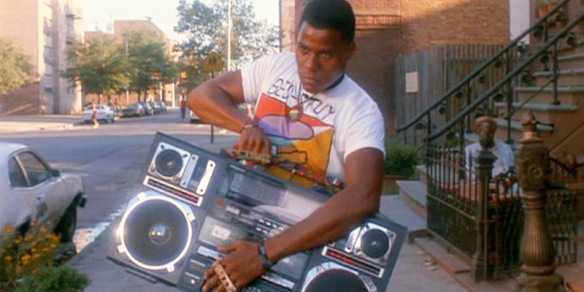 Most of the acting on display is terrific. Danny Aiello is great, as are his two sons and in fact pretty much the entire cast. I especially loved Ossie Davis as Da Mayor. He’s an elderly source of ridicule for most of the youths on the street (Also, side note, does anyone other than those at Sal’s and the Korean store owners work for a living? Everyone spends all day just walking around and buying pizza.) but despite being a figure of fun he has this boundless energy to him, and a youthful, eager glint in his eye. For the most part he’s easily the happiest character here – possibly because he’s drunk – and was a lot of fun to be around. His persistent attempts to get to know Mother Sister better always brought a smile to my face. Unfortunately, the main star of the film and the man also responsible for writing, producing and directing the film, is not a good actor. Spike Lee opted to put himself front and centre but neglected to check whether he could actually act first. He doesn’t deliver his lines as much as he just recites them, and rarely does something approaching an emotion attempt an assault on his face. It’d be fine if he was in a supporting role, but he’s arguably the star, or at least co-lead with Aiello, so it’s impossible to ignore. 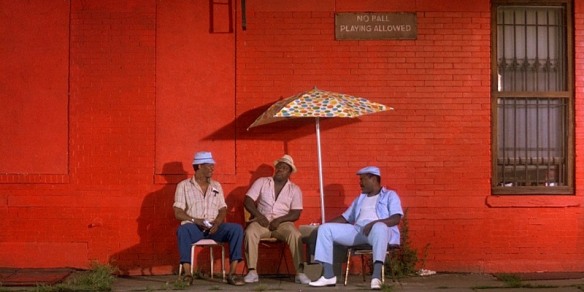 At times this felt very much like a play, with lots of static scenes taking place in a limited number of locations, with a Greek chorus of the three older gentlemen remarking on the goings on of everyone else. Lots of scenes began clumsily, where you could see the actors lent against a wall or in their starting positions, waiting for someone to yell “Action!” so they could start acting. There are some inspired moments, such as the montage of rage-fuelled racist rants delivered direct to camera, interrupted by Sam Jackson essentially yelling “Enough is enough, I’ve had it with these mother-fucking racists on this mother-fucking street!” but overall I wasn’t as impressed as I’d expected. The gradual build-up to the explosive finale was well implemented but made the experience seem to take forever, and the climax was aggravating in a just-as-frustrating-as-real-life kind of way. 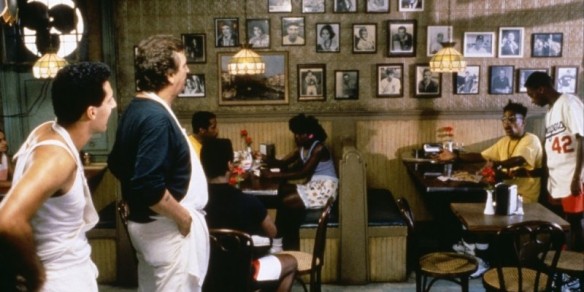 Do the Right Thing is, for the most part, well made and important, tackling some heavy themes in a way that keeps them entertaining and engaging, it just wasn’t something I gravitated to. I can understand the mass appeal and the many fans this film has, I’m just not one of them.

7 thoughts on “Do The Right Thing”