I was all set to regale you this week with my latest arduous tale of woe. This past week I suffered a loss so fraught, so traumatising, that I found myself at a loss with what to do with myself. I wandered from room to room, occasionally looking forlornly into the far distance as if momentarily considering some past lover or long forgotten moment from my youth. I’d sign, subtly shake my head a little then proceed with my day, knowing part of me was missing, out there, in the great wide world.

And then I found my lost notebook, and everything was fine. It had the notes I’d made on some of the overdue reviews I’ve yet to write (The Wages of Fear, Traffic, A Little Chaos, La Jetee and Sans Soleil, to be exact), and in the upheaval required to redecorate our guest bedroom/my podcasting lair it had gotten lost in the shuffle, but low and behold if it didn’t turn up under a pile of other notebooks. Who’d have thought? Anyway that’s why today’s review of Koyaanisqatsi went up a little late, as I’d intended to write a few more reviews over the weekend but only found the notebook last night. Champagne all round.

The aforementioned redecorating has severely limited by cinematic intake this week, but I did watch a few things. Here they are:

Sir Ian McKellen plays Sherlock Holmes, but in his later years as an old man, being cared for by a nurse (Laura Linney) and her young son Roger (Milo Parker) out in the English countryside, where Holmes spends his days caring for his bees and trying not to forget the cases from his past. I was expecting a quiet, understated film, and that’s exactly what I got. This is a long way from the more youthful depictions by the likes of Robert Downey Jr. or Benedict Cumberbatch, but if you’re telling a story with the same character, you may as well make it different. I approved of two things here greatly. The first was the narrative style, with the story split between three time lines which play out simultaneously. First is with Holmes at his eldest, teaching Roger his beekeeping techniques whilst writing a case down as his former partner Watson had once done, but his memory is failing in his old age, so we’re told the story as he recollects it. That’s the second aspect, shown some years earlier as Holmes is hired by a man who is concerned about his wife’s peculiar behaviour revolving around a glass harmonica. Finally the third segment takes place just prior to the first, with Holmes in Japan visiting a man (Hiroyuki Sanada) who claims to have a medicine that will help Holmes with his memory. There’s an arc to each section, and they all play out nicely with minimal confusion, but sometimes it feels like the film has been padded to make an acceptable run-time. McKellen is terrific, and I wouldn’t be surprised to see him nominated soon now the awards season is getting under way, and his supporting cast, including the likes of Hattie Morahan, John Sessions and Roger Allam, are all great too, although Linney’s accent has a tendency to change now and then. Don’t expect an action-packed mystery, but if you’re up for a low-key, slow-paced drama, you could do a lot worse.
Lists: 2015 Movies
Choose Film 7/10 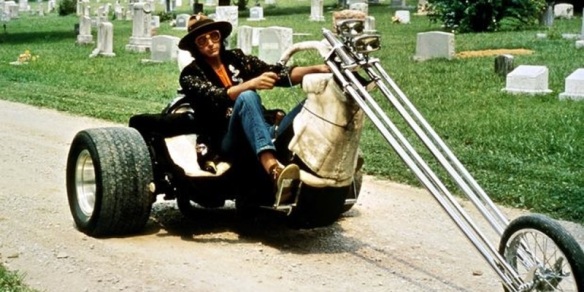 This was my pick for Tennessee for my USA Road Trip over at French Toast Sunday.
Lists: 1001 Movies You Must See Before You Die, Empire’s 5-Star 500, USA Road Trip Movies
Full review here.

Chris Rock wrote, directed and starred in this film about a comedic actor who is tired of making dumb comedies about a talking police bear and wants to make some more serious fare. I very nearly didn’t watch this as it looked a lot like an updated version of the Before movies, but set in New York and starring Rock and Rosario Dawson as a reporter interviewing him for an article, but I’m very glad I did because unlike Richard Linklater’s so-called-romance films, this is actually rather good, has characters I liked, a script that made me chuckle and an actual god-darn plot. It played out a little predictably at times, falling into the old cliché of a romance occurring between the two leads despite her boyfriend and his fiancée – the film takes place just a few days before Rock’s Andre Allen is due to marry Gabrielle Union’s Erica – but even this doesn’t play out with too much on an eye roll, nor does the inevitable parting of ways over a case of suspected betrayal/confusion. There were enough scenes and cameos from Rock’s friends – a particular strip club scene with a well known stand-up-turned-sitcom-star was a definite highlight – as well as a terrific supporting cast to make this well worth my time.
Lists: 2015 Movies
Choose Film 8/10

Posts you may have missed:
USA Road Trip: Tennessee: Nashville
Goldfinger
Koyaanisqatsi
Lambcast #295 Spectre: I was joined by DJ Valentine, Simon Columb, Will Slater and Pete Conway to rip apart the latest Bond movie. It wasn’t that bad, but there was a lot of piss to be taken, and I think we got most of it. The show also features extended rants on bank commercials.

Aim: Review Kate Winslet’s remaining films
Reviewed: 3
To go: 0
Should be on: 3
On Track: COMPLETED!

Aim: Finish French Toast Sunday Road Trip series
Reviewed: 12
To go: 4
Should be on: 13
On Track: No!