I’m not going to waste any more time on this than I have to. Heaven and Earth Magic is, to quote John Cleese, a senseless waste of human life. It’s 66 minutes of crude, jerky, 1950s stop motion that pieces together to form not one single iota of sense. It’s the kind of film where trying to decode the nonsense and assemble some kind of coherent narrative would drive you utterly insane, because it’s nothing but objects and outlines, interacting with one another in increasingly bizarre ways. Any such plot that could be assigned to the goings-on would do so via great leaps of metaphor, and many threadbare external references applied. 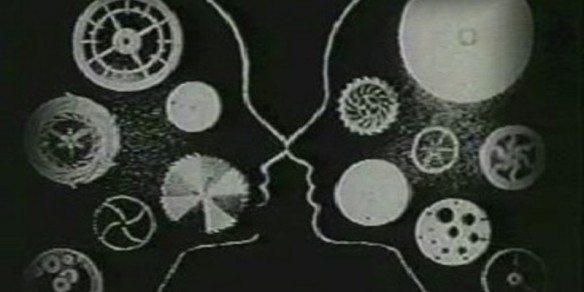 The Wikipedia page for this film disagrees with me, however, stating the plot thusly, and quoting director Harry Everett Smith himself: “The first part depicts the heroine’s toothache consequent to the loss of a very valuable watermelon, her dentistry and transportation to heaven. Next follows an elaborate exposition of the heavenly land, in terms of Israel and Montreal. The second part depicts the return to Earth from being eaten by Max Müller on the day Edward VII dedicated the Great Sewer of London.” Please, for me, read that statement again, and then question the world we live in as to why Smith was never institutionalised for the safety of himself and humanity as a whole. Toothache as a consequence of losing a valuable watermelon. Returning to Earth from heaven by being devoured by a German religious scholar. What utter drivel. Even if this were true, none of it is evident from watching this godforsaken piece of crap. There is a dentist’s chair, and a woman sits on it, only for a small man to crank the height up too high, then pass her up a large fish. Then he throws a hammer at her (a repeated motif in this film) which transforms the woman into just the upper half of her body, which now appears larger. The man gives her a bonnet and a flower, then uses the hammer on the chair and sends it careening off like some demonic robot arm. Later we have such scenes as an egg hatching a human baby, and said baby being tossed around on a set of scales which eventually close on the baby, at which point a skeleton pokes at it with a long pointy stick until the baby turns into the watermelon, then an umbrella. Later still there’s a series of men with Bunsen burners in place of the lower halves of their bodies. At one point I’m pretty sure the woman, who is now also half a Bunsen burner but is still wearing her bonnet, makes love to one of the Bunsen burner men, but he has the watermelon for a head and only one eye on it. I say “only one eye” as if most half-man-half-Bunsen-burners with watermelons for heads normally have more than one eye. I think Vinyl has a new contender for Worst Film On The 1001 List.

3 thoughts on “Heaven and Earth Magic”