The problem with having goals is my time gets spent trying to achieve them, and I often find myself striving to fulfil these predetermined tasks instead of doing something I want to do now. Thus, most of the movies I watch are ones I need to for the task at hand – be it to meet a goal, or in preparation for a podcast. And so it was that this past week I found myself longingly looking at a LoveFilm DVD of Robin Hood: Men In Tights, a film I’ve never seen but would probably enjoy, but which I did not have the time to watch. My partner had no interest, though to be fair she’d already sat through two Robin Hood movies in recent weeks and doesn’t much care for parodies or musicals, and my time to watch films outside of her presence is filled with the ones I’ve yet to cross off my many numerous lists. All was not lost though, as some unplanned and unlisted movie watching was accomplished this week, and of a film I’d owned for years without ever popping into the player. What film was that exactly? Well read on to find out. 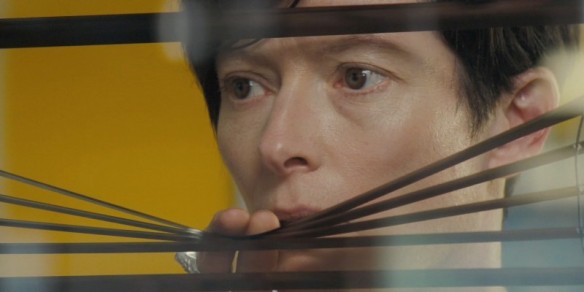 I bought this on DVD several years ago, thinking it was amongst the many films I need to review for the various lists I go through, given how critically acclaimed it was upon release. As it turned out it wasn’t on any of the lists, so it has sat languishing amongst my unwatched DVDs ever since, right up until last weekend, when we popped it in as preparation for an upcoming Lambcast on female-directed movies (more on this later). So, Tilda Swinton plays a woman whose son (Ezra Miller) is an evil little shit who grows up to do something the rest of the community frowns upon, and everyone she knows despises her because of it. It ruins her life in seemingly every possible way, and we get to watch this play out, spliced together with Kevin, her son, growing up, making her life a misery and then sending everything to heck. This film is terrific. I loved it, and I cannot understand the lack of academy love. Swinton should have been up for Best Actress (maybe knocking out Rooney Mara for Dragon Tattoo or Michelle Williams for My Week With Marilyn), Miller should have been nominated for Best Supporting Actor (kick out Kenneth Branagh for Marilyn or Jonah Hill for Moneyball. Actually, whatever happens kick out Jonah Hill for Moneyball), Best Adapted Screenplay (goodbye The Ides of March) and Best Picture (Extremely Loud and Incredibly Get Out Of The Nominees). I’d even take Directing too, but I’d opt to eject Terrence Malick for The Tree Of Life, which seems to be an unpopular opinion. It’s often not an easy watch given the subject matter, but it is very well handled, acted and directed, top marks all round. This really should be on at least the 1001 List, if not others too.
Lists: None
Choose Film 9/10 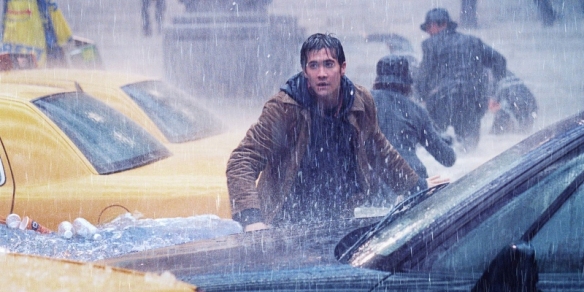 Bit of a guilty pleasure re-watch this, although both this and the next film were only half-watched in the background whilst laptopping, and even then only because we were too lazy to stick a DVD on (not that we don’t own both films on DVD anyway). And before you yell at me, I’d already sent Men in Tights back by this point. The Day After Tomorrow is not a great film, but I’m a fan of epic disaster movies, and whilst this one is often too serious for its own good I still find a fair amount to enjoy. Decent character actor supporting cast too, including the likes of Dash Mihok, Ian Holm, Jay O. Sanders and Adrian Lester.
Lists: None
Choose Life 6/10 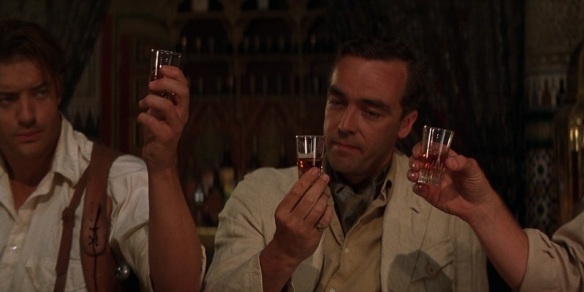 An underrated movie, Stephen Sommers’ classic Universal remake doesn’t get discussed enough in my opinion. Yes the effects are a bit dated, but what CGI-heavy 90s movie isn’t? And more importantly this is just a whole heap of fun. Everyone in the cast completely understands how to be entertaining, with John Hannah being a particular highlight for me, and Arnold Vosloo makes for a terrific Imhotep.
Lists: None
Choose Film 8/10 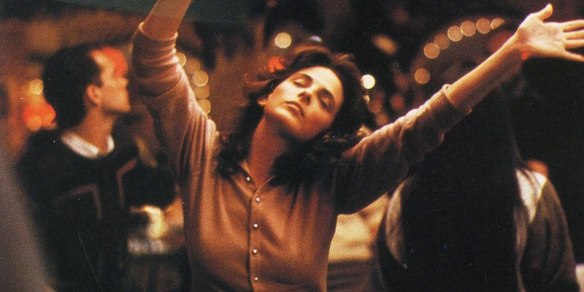 Crossed off the list and also preparation for the female-directed draft. Expect a review soon.
Lists: 1001 Movies You Must See Before You Die, Empire’s 5-Star 500
Full review coming soon. 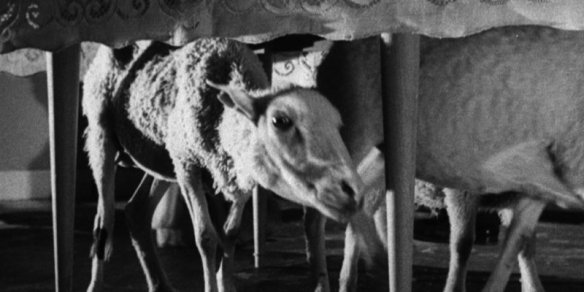 Whenever we record a Whatcha Been Watchin’ Lately Lambcast episode I always like to have a more off-kilter movie to discuss (last time was Pink Flamingos) and this time my choice was Luis Bunuel’s The Exterminating Angel. Expect a full review soon, but don’t expect it to be overly positive.
Lists: 1001 Movies You Must See Before You Die
Full review coming soon. 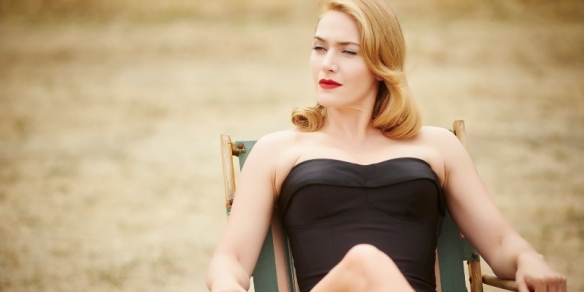 I’m looking forward to writing my review of this Kate Winslet starrer, if only so I cans top thinking about it. A fairly rudimentary premise fell flat at basic film-making rules.
Lists: 2015 Movies, Kate Winslet Movies
Full review coming soon. 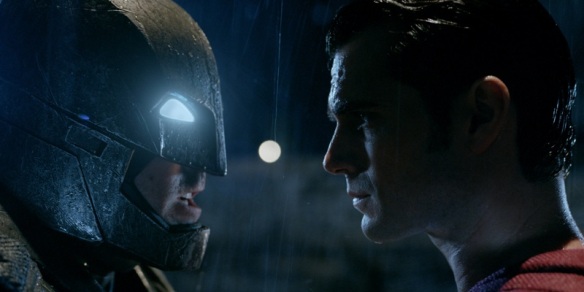 Oh boy. Batman, one of my favourite superheroes, fighting Superman, one of my least favourites. I have a lot – A LOT – of thoughts on this film, as indeed does the rest of the Internet, it would seem, and I’ve already appeared on one podcast discussing it and have another lined up soon too. If I wasn’t so busy I’d write a full review. Maybe I still will, who knows? Either way, I expected this to be utterly abysmal, but ended up kind of liking it. It’s by no means a good film, but there is some excellent action and I think everyone handled their characters well, particularly Ben Affleck (Batman), Jeremy Irons (Alfred) and Gal Gadot (Wonder Woman). I also enjoyed what Jesse Eisenberg brought to Lex Luthor. I approve of the decision to bring Batman (who is awesome) into the previously lacklustre franchise od Superman (who is most definitely not awesome), as any chance I get to watch Batman fight goons is a chance I’ll not pass up. The problems lie in a script that is both overly complex and forehead-slappingly asinine, particularly with regards to the reson behind an argument’s dissipation, and the shoe-horning in of the Justice League introduction feels comical. It’d be worth seeing at the cinema if it wasn’t 2 1/2 hours long. As it is, if you’ve got a decent enough TV then you can wait for a rental, if that.
Lists: 2016 Movies
Choose Life 6/10 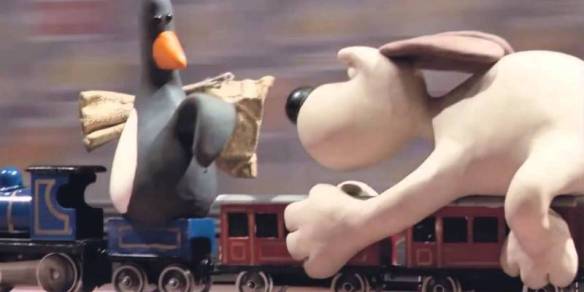 What Easter bank holiday weekend is complete without a Wallace and Gromit short to round it out? I’ve got endless time for Aardman, and where they began remains their best work. The Wrong Trousers is utterly ludicrous – let’s not forget, the villain is a museum-robbing penguin – but it completely works within its world. Still my favourite train sequence in any film.
Lists: None
Choose Film 10/10

Posts you may have missed:
The Lovely Bones
Rocco and His Brothers
The Adventures of Robin Hood
Pulp Fiction
Out Now With Aaron And Abe #234: Batman V Superman: Dawn of Justice: I was honoured to be invited onto the Out Now podcast to discuss the latest DC superhero movie, regardless of how insanely early we recorded (4am on Easter Monday, but seeing as I had the day off I didn’t really mind). I’ve listened to the Out Now show for a while now (Aaron has become something of a regular on the Lambcast) and I thoroughly enjoy their blend of serious film discussion, general larking around and overall entertainment value. I’d recommend it to anyone.
Lambcast #313 Whatcha Been Watchin’ Lately: I was joined by Will Slater, Nicole Ayers, Nick Rehak and Robert Zerbe to discuss movies we’d seen recently. This time we talked about Archipelago, Triple 9, It’s Such A Beautiful Day, Turbo Kid and The Exterminating Angel.
Lambcast #314 Celebrity Lambpardy: This was a fun one. We have a regular quiz show, Lambpardy, but we did things a little differently this time, with everyone (myself included) putting on impressions of celebrities and characters, of varying degrees of quality. The contestants were Michael Caine, Sylvester Stallone, Sam Elliott, Gonzo the Great, Rick Grimes and Mickey Mouse, with Sean Connery hosting (plus a couple of special guests along the way). It’s one of the more ridiculous things I’ve ever been involved with, but it was also easily the most fun I’ve had in a long time.

Aim: Review 2 “Film-Makers” movies each month
Reviewed: 6
Should be on: 7
On Track: No!