Michelangelo “Mikaeli” Caravaggio (Dexter Fletcher) is a painter and street hustler in late 16th Century Italy when he catches the eye of the wealthy Cardinal Del Monte (Michael Gough), who proceeds to fund the boy’s artwork. Growing up (into Nigel Terry) Caravaggio lives a hedonistic lifestyle, fornicating with his models – both male and female – eventually leading to a complicated love triangle between himself, street fighter Ranuccio (Sean Bean) and his manager/lover Lena (Tilda Swinton) which is unlikely to end well for anyone involved.

Derek Jarman is the Director of the Month over at the LAMB and, this being the only Jarman film I need to review, it seemed the perfect time to do so. I went in knowing absolutely nothing about the film or indeed the painter whose life it is based on, and sadly I left with a similar degree of understanding. This isn’t a film told and structured in a way optimal for comprehension, instead it remains intent on providing an evocative and compositionally picturesque look at this man’s existence, told via flashbacks from his death bed in a hallucinatory, vague and occasionally anachronistic fashion. 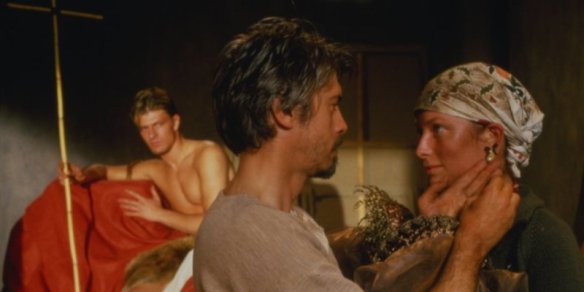 This is one of those films that I feel has been made exactly as the director intended, but in doing so has created a film that doesn’t appeal to me at all. Most of Terrence Malick’s work can be attributed the same description. This is a story about a man I’m not terribly interested in, told in a way I find frustrating – there’s far too much flowery poetry in Terry’s narration to fully comprehend anything that is going on – with minimal dialogue and occasionally long scenes of models posing for paintings without a great deal else happening. Had I been watching this late at night I’d have been very surprised if I hadn’t fallen asleep. Everything looks fantastic and very much in keeping with Caravaggio’s artistic style, so the imagery is distinct and memorable, even down to shots of Michael Gough sitting at his desk, his robe hanging from one shoulder and the light illuminating a skull sat atop his books and papers, so it’s clear a great deal of attention has been paid to setting up the shots, therefore credit must be given there.

Similarly there are some decent elements of the storytelling – cutting from one character upsetting someone to them being dead on a table in the next scene is all the plot you need for that moment to be clear, but elsewhere I was thoroughly confused by the inclusion of some deliberately out-of-time elements, such as characters using a calculator, typewriter and glossy magazines. I cannot fathom the details of this particular directorial choice, and as such it was very jarring. Robbie Coltrane’s moustache, on the other hand, was glorious. 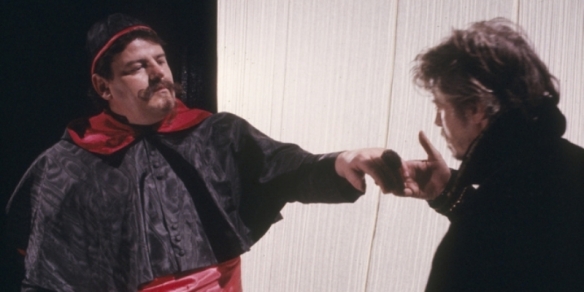 All in all I can see other people – perhaps those possessing a greater fondness for the artistic – appreciating this film a great deal more than me. I approve of Sean Bean getting to do the two things he does best on screen here, but for the most part this wasn’t something I overly enjoyed.