This week has been pretty uneventful mainly because I’ve spent most evenings – in fact all of the evenings and most of the nights – doing craft projects for Aisha’s work. As such I’ve written about as many reviews as I’ve had full nights sleep, and I’ve watched a comparable amount of useful films. I did get a few in last weekend though, so here’s what I watched recently:

An obligatory re-watch before seeing the new sequel (more on that coming up). This is still a really enjoyable film that to be honest I didn’t need to re-watch having seen it dozens of times in my youth. Can you think of another film where the two leads don’t actually meet one another until an hour and three quarters into the film? What works here is the charisma of the leads, particularly from Will Smith and Jeff Goldblum, slowly introducing the sci-fi elements into the film and making sure the supporting cast – including Randy Quaid, Vivica A. Fox, Brent Spiner, Judd Hirsch, Robert Loggia, Harry Connick Jr., James Rebhorn, Adam Baldwin and Harvey Fierstein – all have something to do, contribute to the plot and are entertaining whilst doing it. Plus there’s Bill Pullman’s iconic speech, that has gone down as one of the best in cinema history. It’s no wonder a sequel was made for this, but it’s a puzzle as to why it took 20 years to come around.
Lists: None (Already crossed off: 1001 Movies You Must See Before You Die)
Choose Film 9/10 Original review here.

Speaking of the sequel, take all those things I mentioned worked about the original and try to guess what happens when you just throw them all away. 20 years on from the first film and mankind has used the recovered alien technology to develop life to a futuristic degree, with space travel now ultra fast and laser guns as standard. Also, the aliens are coming back, this time with a ship big enough to cover the Atlantic Ocean, which comes equipped with its own gravity. Jeff Goldblum returns to try and stop it, Bill Pullman’s former president is now a bit crazy, suffering from PTSD after the aliens got in his head last time, and in fact most of the supporting cast are back too, including Brent Spiner, Vivica A. Fox, Judd Hirsch and even Robert Loggia in a small but noted cameo. The ones who get something to do – most notably Spiner – are great, but the rest either feel hugely underused – hello Vivica – or are crow-barred in for fan service but add literally nothing to the plot other than something to cut to between the boring, murky set pieces. It didn’t help that the new young leads are uniformly bland – Liam Hemsworth is still defying the odds and being cast in lead roles, presumably based entirely on his looks and his relatives – and made so little impression I’ve already forgotten most of them. It leaves the climax open for what could be a fairly strong part three in the franchise, but it’s completely unearned that something this shoddy should be worthy of a third instalment.
Lists: 2016 Movies
Choose Life 3/10 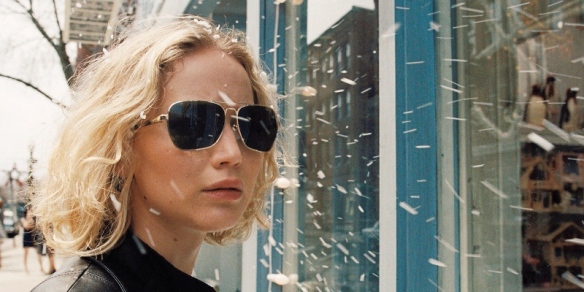 I didn’t want to watch this. Aisha wanted to watch this, so I thought I’d give it a shot, but predictably a David O. Russell-directed, Jennifer Lawrence-starring biopic about the inventor of a mop didn’t exactly grab me. It’s going to be an odd comparison, but to begin with I had the same issues with this as I did season 1 of Breaking Bad. I that, Walter White has pretty much everything stacked against him – turning fifty, disabled son, heavily pregnant yet distant wife, job teaching disinterested students, humiliating part-time job on the side, over-bearing and obnoxious brother-in-law, and all capped off with being diagnosed with terminal cancer. It just felt like too much to be plausible or to be kept track of, but over time I learned I was wrong, and the show-runners were more than capable of not just keeping all the plates spinning, but doing so in a fairly miraculous fashion. In Joy, the eponymous entrepreneur (Jennifer Lawrence) begins the film a single mother raising two small children whilst also holding down a job at an airport check-in desk dealing with the worst of humanity on a daily basis. At home her unemployed, failed singer ex-husband (Edgar Ramirez) lives rent-free in her basement. Her mother (Virginia Madsen) seems adhered to her bed and spends every waking minute – and some of the sleeping ones too – with her eyes glued to her soaps on TV. Her factory-owning father (Robert DeNiro) has just been kicked out by his girlfriend and moves in with Joy too, being forced to share the basement with the son-in-law he loathes, and Joy’s bitter sister (Elisabeth Röhm) is viewed as being more successful for working with their father, running his factory. Only Joy’s grandmother Mimi (Diane Ladd) and best friend Jackie (Dascha Polanco) offer anything close to assistance or sympathy, with Mimi purveying pitying looks at every given opportunity. One day, whilst cleaning up the latest catastrophe her family has caused, Joy cuts her hand on broken glass she is trying to mop up, and comes up with the notion of a mop you don’t have to wring out with your hands, which leads her down a path of investors (Isabella Rossellini) and home shopping TV producers (Bradley Cooper), all of whom seem to have little consideration for Joy’s well-being. For me, this is a prime example, like Chariots of Fire in a recent review, of a true-ish story that’s just not interesting enough to be made into a film. Perhaps a documentary or a made-for-TV special, but this should never have made it to cinemas, and it never should have garnered the cast present here. Fortunately the entire cast took note of the unworthiness of the material and all opted to sleepwalk through the whole thing, offering nothing close to an acting performance other than perhaps Madsen, but only because her character has more quirks. I’ve voiced by opinions on Jennifer Lawrence before and I won’t go into it here, other than to say I find her Oscar nomination for this performance to be utterly laughable. She is in danger of becoming another Meryl Streep, earning Oscar nominations purely for releasing a film in the relevant time frame, but without any of Streep’s talent. I appreciated the product design and invention side of things, and occasionally became somewhat involved in the never ending torrent of defecation streaming down upon Joy and her business, and if a film can make me annoyed at the plight of its lead then credit must be given, but for the most part this is a very boring and poorly acted film.
Lists: 2016 Movies
Choose Life 5/10