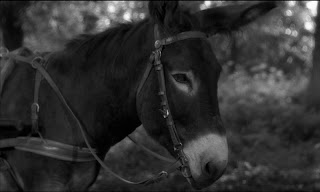 Au Hasard Balthazar is the kind of film that just couldn’t be made today, at least not with the same result. Today, it would most likely be made by Dreamworks, telling the tale of a morose animated donkey, voiced by Christopher Plummer, as he sets out an epic journey to be reunited with the family he’s worked for his entire life. Along the way, he learns lessons about friendship not judging by appearances, with the help of a lazy squirrel (Kathy Bates) a know-it-all platypus (Jemaine Clement) and a wise-cracking raccoon (Cuba Gooding Jr.).
As it is, Balthazar is a tale of the life of a donkey, from children’s plaything, through toiling away for various family’s, finding fame in a circus and finally, tragically, used for drug trafficking. It took me two attempts to watch this film, as after the first viewing I did not fully comprehend the cause of the mass adulation poured upon the picture, although I was quite tired and may have drifted off a couple of times, as it’s not necessarily the most captivating of films. That said, on the second viewing I more greatly understood the reasons for the various plot jumps, as for the most part the film is shot from the viewpoint, and therefore the understanding, of Balthazar himself, thereby it would not always be clear as to why some characters behave the way they do.Choose life 4/10