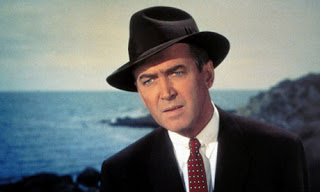 ‘Scottie’ Ferguson (James Stewart) is a detective in San Fransisco who suffers from crippling vertigo, exacerbated by his most recent rooftop scuffle culminating in the death of a colleague and the escape of the perpetrator being pursued. He therefore retires, only to be called upon by an old college friend Gavin (Tom Helmore) who is concerned about his wife Madeleine (Kim Novak), who may or may not be occasionally under some form of supernatural possession from an ancestor who committed suicide at the same age Madeleine is now.

This viewing was my second attempt at watching Vertigo, which since my initial watching about four years ago, has risen in the opinion’s of many critics and film-makers, who recently evicted Citizen Kane from the top of Sight and Sound’s greatest movies list, and replaced it with Hitchcock’s thriller. When I heard the new listing, which also features The Searchers, 2001: A Space Odyssey, Tokyo Story and the frankly benign Man With A Movie Camera amongst it’s top 10, I was at first a little taken aback, as whilst I knew Vertigo was well regarded, I certainly wasn’t of the opinion that it was better than Kane, or a host of other great films for that matter. This incredulation was not well founded however, as upon further inspection S&S’ top 50 list also included such undeserving winners as Battleship Potemkin and Breathless, and you show me someone who genuinely believes that Psycho (#35) is a worse film than Au Hasard Balthazar (#16), and I’ll show you someone who deserves to have their worldview re-evaluated, preferably via a kick in the teeth from a donkey. And what am I talking about? Jurassic Park isn’t even on the list at all! It must have been awarded the honourary #1 spot and retired, to give some other films a chance. I feel like I’ve drifted a little off topic here. Where was I? Oh, right. No, I didn’t think Vertigo was entirely deserving of it’s new crown, and now I’ve watched it again and actually paid proper attention to it I still disagree with the rankings, but by a much smaller margin.

I think my problem with it upon first viewing was my narrow-minded desperation to try and confine the film into a specific category, which is not something one should do when watching any film, least of all Vertigo. At various points during the first half an hour or so the film could quite easily become a crime investigation action piece, a romantically driven love triangle (or square), a supernatural whodunnit or a character-motivated drama about overcoming adversity and facing one’s fears. Even upon watching, it still occasionally raised question marks as I tried to deduce how I’d categorise it on IMDb. FYI, they opted for mystery romance thriller, which neatly ties in all of the ones I mentioned.

The film begins with an heart-pounding chase across rooftops and up ladders, with Scottie and a cop on the tail of some wrong-doer who badly wishes to evade whatever questions or handcuffs they wish to impose upon him. This sequence features two of the film’s most recognisable and defining images, the first being Stewart dangling from a drainpipe, and the second being his viewpoint as he inadvisably looks down from his precarious position. This shot, now known amongst other things as the ‘Hitchcock Zoom’ could well be the reason why this film is so revered, and has been copied, homaged and built upon by the likes of Spielberg and Scorsese, and is achieved by zooming in on the foreground, whilst slowly panning backwards, away from the subject. This keeps the focal point the same size, but shows the background appearing to drop away or distort behind them, thereby creating the perfect cinematic recreation of the feeling of vertigo. It could well be the most perfect shot in history, right up until the technique is used again a little later, this time in a stairwell to even greater intensify the effect. Supposedly the concept was conceived by Hitchcock whilst drunk, and was originally planned for use in Rebecca, but it was realised here by cameraman Irmin Roberts, one of the film’s uncredited second unit directors of photography. It’s a great shame that the supposedly greatest film of all time potentially owes it’s notoriety to a man most people, even inside the cinematic universe, have never heard of. There’s some other great shots in the film too, particularly a rotating kiss near the end that I can only imagine required a rather elaborate set to film, as well as an expertly framed shot of Scottie leaving a church which reminded me of a similar shot in North by Northwest. Here, Scottie is fleeing in the bottom corner, whilst some other people are climbing the roof to discover what he is fleeing from, but on entirely the other side of the screen.

The score, by Bernard Herrmann, is predictably great, but I was distracted by my own fits of laughter in one scene featuring a church-like building, as the music being played inside sounded exactly like the background music from Tetris, which is tickled my ribs to notice is all about things falling.

This is easily the best performance I’ve seen given by Stewart. He’s much less clean cut and heroic than usual here, showing his fifty years of age especially in his more romantic scenes with Novak, a good twenty five years his junior. I love the moment when their hands innocently touch accidentally, causing him to freeze, a look of unease crossing his face as he does not know how to feel about the emotions coursing through him at that point. And when he stumbles into “I enjoyed it” after Madeleine apologises for him having to dive into the San Fransisco Bay to save her life. I’m also a big fan of Scottie’s relationship with Midge (Barbara Bel Geddes), his former sweetheart and consistent friend, who clearly still carries a brightly burning torch for her old flame, despite his affections eventually pointing in a different direction. It’s clear from the start that Midge will never be the predominant love interest – she is wearing glasses after all – her role is more of the confidant, the best friend excitedly brought in on the case – just look at how quickly and eagerly she’s ready to investigate a historian for some information, before poor Scottie has finished pouring his drink. Part of me would have liked the Scottie/Midge relationship to have been tied up a bit more neatly at the end – she never really gets the closure she deserves – but it stops being shown as soon as it stops being important to Scottie, and maybe Midge never got that closure after the credits rolled.

From this point on I’m going to be delving into spoiler territory, so if you haven’t seen it skip to the end, or go watch it and come back. Consider this review so far to be a hearty recommendation. Anyway, Kim Novak. For the first section of the film, before she fakes the real Madeleine’s death (did I not tell you there’d be spoilers? You’ve only got yourself to blame) I was a bit underwhelmed by her acting. She didn;t seem to have much going on, and was pretty devoid of character. I realise now that this may have been at least a little intentional, seeing as she was essentially playing a ghost, and one she’d probably never met in the first place. When she reappears as Judy, the woman who had been pretending to be Madeleine for Scottie, she is almost unrecognisable, so much so that I couldn’t tell it was the same actress, as it was only the distractingly steep eyebrows that bore any similarity between the ‘two’ women. I think Novak may have been a bigger star back in 1958, and therefore more recognisable for cinema audiences, but for me and the others I watched it with we didn’t immediately click that it was the same actress, which if anything added to the plot, as Scottie himself doesn’t know. Either way, the camera loves her, although a little more so as Madeleine than Judy. She almost glides around that restaurant in the green dress, however I was never much of a fan of her in the grey suit Hitchcock famously made such a huge deal of when Novak initially refused to wear it. I really appreciated what she had done by the end of the film though, showing that subtle changes in make-up, hair and clothing do make a huge difference, but even when dolled up the same as she had been when originally pretending to be Madeleine, you could tell it was a different character underneath. It must have been a very difficult role to get her head around, initially being someone pretending to be someone else, and then eventually being someone pretending to be the same person she was pretending to be earlier, but know she must do so whilst convincingly pretending to know nothing about the original person she was pretending to be. It becomes so blackly comic, even sadistic, once we are trusted with the twist before Scottie, as we see him trying to transform this woman into the person she used to be, going out to find a suit she already has in her wardrobe.

If I were to call upon the elements of the film I’m not overly keen on, I’d begin with the semi-animated sequence showing how Scottie has gone insane from the guilt of believing his acrophobia caused the death of his love. I understand that it’s meant to be disconcerting and jarring, but seeing James Stewart’s disembodied head advancing from a brightly coloured solid background reminds me of Porky Pig at the end of a cartoon. Also, the ending leaves me a little dissatisfied with the way Judy-dressed-as-Madeleine trips and falls from the window. Yes, that is how she must die, in the same way Madeleine kind of died in the first place, but I feel it would have been more conclusive and finalising had Scottie stumbled and knocked her out the window, rather than she tripping whilst fleeing backwards, so that he would have caused it all. It just felt a bit stilted, as though Hitchcock knew where he wanted all the characters to be, but wasn’t sure how to get them there. Or maybe he’s the greatest director who ever lived, and I;m just another schmuck criticising a film for the sake of it. Either way.

I love how unnecessary the driving plot of the film seems to be. Yes, there’s a bad guy, Madeleine’s husband Gavin, but his scheme is almost superfluous, and is never entirely resolved on screen. No, what’s more important is the relationship between Scottie and Judy/Madeleine, the obsession that builds, and the lengths Scottie will go to attempt to fool himself into being happy. So no, it isn’t the greatest film of all time (still Jurassic Park, I keep telling you), and it’s not even the greatest Hitchcock film (North By Northwest, if you were wondering), but it is thoroughly deserving of at least being present on the ‘snooty critic list,’ it just isn’t an entertaining enough watch for me to keep revisiting regularly.