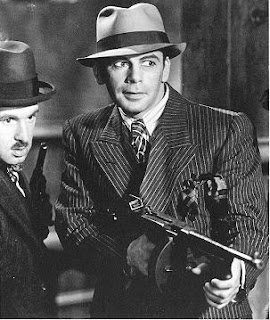 I’ve seen Brian De Palma’s 1983 Scarface a couple of times, and have never fully understood why it is as revered as it is. I’m not saying it’s a bad film, I just don’t think it’s that great, but more on this another day, for that too is on the list. No, today I’m here to discuss the 1932 original, in my opinion somewhat superior to its remake. The story tells the tale of a young gangster rising up through the mob ranks, and the effect it has on those closest to him. There is far more comedy in this version than the remake, mostly from the dialogue (“I was kissin’” “I don’t like it” “You’re missin’ lots of fun”) and from the bumbling, illiterate secretary and his endeavours to use a telephone.
Technically, there are some creative shots, such as a machine gun shooting away the calendar pages to show both the course of time and the violent acts that take place during it, and the scene of a mass execution being shown only in silhouette. I very much enjoyed this film, and hope to find many more like it as I journey through the list.
Choose film 8/10