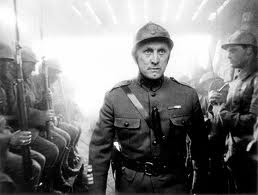 Paths of Glory emphasises the differences between the high ranking officers and the lowly privates during the first world war, as after a failed advance, the general in charge demands three soldiers to be made an example of, via a firing squad. The general assumes cowardice on behalf of the men, yet each of the men chosen has a valid reason for retreat, be it finding themselves alone against an insurmountable challenge, being ordered not to by their superior or being knocked unconscious during the advance.
The film is part war, part courtroom drama, as Kirk Douglas attempts to defend the three against their charges. There were some good shots, such as the tracking shots through the trenches, that I feel would have benefited from being single continuous takes, although perhaps budgetary conditions and the technology available at the time limited this. The final scene, as Douglas stands outside watching the troops leer at a female German singer, makes us think who is worse, the generals more than happy to fire upon their own men to make them attack, or the soldiers themselves, reduced to their base urges in the face of death.
Choose film 7/10