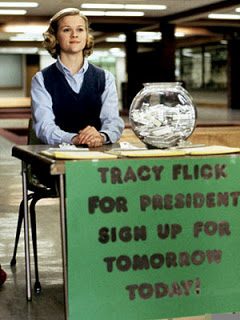 Apologies, I watched this over a week ago, but haven’t had a chance to write anything until now, sorry. I’ve got a soft spot for Election that is also one of the reasons I don’t necessarily get on well with the film. Growing up, I was always a Tracy Flick kind of student. If there was ever a hand up in class, chances are it would be mine, I took my schoolwork very seriously and wasn’t necessarily the most popular person at school (shock horror),  although I can’t say I distinctly remember sleeping with any members of staff, but I’ve blocked out a lot of my formative years so who knows what happened. So although I empathise with Flick, pitch-perfectly played by the Golden Globe nominated Reese Witherspoon, I feel sorrier for Matthew Broderick’s ethics teacher Jim McAllister, and even more so for my own previous teachers, who had to endure a real life version of Flick’s character.
The plot finds McAllister organising the upcoming election for student body president, a role for which Flick is running unopposed. Horrified at the thought of having to spend any more time than is strictly necessary with his aggravating student, McAllister sets about encouraging another student, Chris Klein’s popular yet slow jock Paul Metzler, to run against her. Difficulties arise when Flick discovers, the plot and Paul’s outcast sister Tammy also runs against them both.

The cast all do an excellent job of rounding out their characters, but I feel that Klein is very underrated in this film, with his candidate speech being one of the highlights. I was also pleased with the character of McAllister, especially making him an ethics teacher, considering almost everything he does is unethical in some way or another, from setting a pop quiz when he needs to run errands to sleeping with his best friend’s wife in front of his own infant godson.
Choose film 7/10