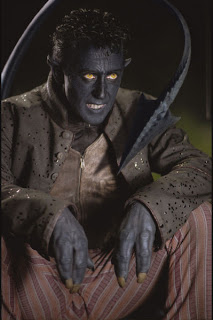 With the consistently excellent Matthew Vaughn (Kick-Ass) releasing his upcoming X-Men First Class soon, a film about which I am very excited, and not just because it features January Jones and very little clothing, I thought it was apt to cross off X-Men 2. Although there were some excellent scenes, most notably the entrance of fan-favourite Nightcrawler (Alan Cumming) attempting to kill the President, the attack on the Mutant Academy and the fight between Wolverine and Lady Deathstrike, there were some plot holes I just couldn’t get past at the end of the film (spoilers).  Firstly, when Magneto (Sir Ian McKellen) breaks into Cerebro, where a brainwashed Professor X (Sir Patrick Stewart) is being used to locate and kill all mutants worldwide, we are shown the mutants writhing in pain for the 30 seconds or so they are being attacked, so when the machine is altered, to affect non-mutants instead, we can only assume that they (we?) are put under a similar level of duress. So we’re talking about everyone driving a car, every pilot flying a plane, every surgeon performing an operation, all these people would be unable to function for a few minutes, causing carnage worldwide, and probably a massive number of fatalities. Secondly, why did Phoenix (Famke Jannsen) die? Yes, she got off the plane to lift it into the air (I’m assuming there are some logistical difficulties with lifting something you yourself are inside), yet there is a period of time between the plane being up in the air and the flood of water, that she is holding back, from engulfing her. She knew there was a teleporter on the plane, as we are told she is preventing Nightcrawler from helping her, but why not let him bamf out and grab her after she’s lifted the plane? It is a completely needless death, present only so when Charles meets the president at the end of the film, he can say there were losses on both sides, even though we are shown she didn’t really die.
Other than that, Brian Cox makes an excellent Bond-like villain, complete with henchmen, underground lair and, ahem, crippling put-downs (remarking “don’t get up” to a wheelchair-bound Professor X), and making the film more of an ensemble piece, as opposed to the originals Wolverine-show , even though he is the most memorable and fleshed out character. I also approved of director Bryan Singer including elements of his own life, for example Iceman (Shawn Ashmore) ‘coming out’ to his parents as a mutant.
Choose film 7/10