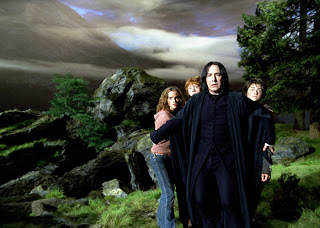 Seriously? Potter? On the list? We live in a world where a Harry Potter film is voted onto a top 500 list and Hitchcock’s masterful Dial M For Murder isn’t? This is considered more essential viewing than Eastwood’s Mystic River? Doug Jones’ Moon? Adaptation? Motorcycle Diaries? Planes, Trains and Automobiles? No? Anybody? Fine.
Not that I’m against the Potter-verse, I own all the books and have seen all the films, some of them at the cinema, and I’m quite looking forward to part 7ii, if only so this bloody franchise will cease and desist. Hell, I even queued up outside Morrison’s on the day book 7 was released (unintentionally, I thought they opened earlier), but I couldn’t say what happens at the end of it though, other than I think a ruddy great battle, and one of the twins dies (I know, only one?).
So why is number 3 on the list instead of the others? If I had to pick, I’d have gone for number 4, the Goblet of Fire, purely because it’s my preferred of the books and has dragons in it, but 3 seems to have received far greater critical acclaim. The power of three it would seem is in its tone, as new director Alfonso Cuaron (replacing Chris Columbus, to be replaced by Mike Newell for part 4 and David Yates for the rest of the saga) darkens the cosy, comforting feel of the first two, but not so much as becomes commonplace for the latter half of the series. He does deal with some tricky topics though, encountering betrayal, execution, wrongful imprisonment, a man living as a rat for 12 years and an inflatable Pam Ferris (one of the least popular sex dolls in existence I assume).
The main flaw of the Potter franchise is its leads, with the understandably inexperienced child actors thrust front and centre they cannot hide behind more professional adult stars, but the cream of British acting and comedy do their best to fill in the surrounding cracks. Michael Gambon, Maggie Smith, Richard Griffiths, Gary Oldman, Timothy Spall, Alan Rickman, Robbie Coltrane, David Thewlis, Emma Thompson, Dawn French, Lenny Henry, Julie Walters, Mark Williams and Warwick Davis all do their bit, but whenever the story is left purely to the kids the quality is severely diminished.
Choose life 6/10