There are some films on the List that I’ve no idea when I’ll get to them. These films fall into three categories – the ones I absolutely adore but have no clue how I’ll even start writing about them, the ones I desperately do not want to watch (but am too much of an anal completist to ignore) and the really long ones. This four-hour-plus cut of Hamlet obviously falls into the latter, but fortunately for me, my girlfriend opted for Kate Winslet as her Film-Maker of choice, and seeing as I’ve reached that point in Winslet’s career in which she appeared in Hamlet as Ophelia, I can cross off Kenneth Branagh’s opus from the Empire 5-Star 500. As for the unspeakable films I don’t want to see, whenever LoveFilm drop Salo through my letterbox it shall not be a good day, though I could pull an In The Realm Of The Senses and bottle it when I’ve taken as much as I can stand.
END_OF_DOCUMENT_TOKEN_TO_BE_REPLACED

I’m a strange breed of muggle. I’ve seen all the Harry Potter films, most in the cinema. I’ve read all the books. Hell, I own them. Double hell, I was first in line queueing up outside Morrison’s on the morning book 7 was released. But I wouldn’t call myself a Harry Potter fan. So why have I kept with it? I read the first book in school, and found the wizarding world to be quite wonderful, a dream of a place to escape to. Granted, by the time the much darker later books came along I became much happier that this world of dictatorial terrorists with almighty magical powers didn’t actually exist (or so I’m led to believe) but back then it was nothing short of fun, and the fact that I was of a similar age to the protagonist when the books were released made it all the more so.
The books were perfect for film adaptations, and the stylistic choices throughout the series have been close to faultless. Most of the negative aspects, other than the questionable acting abilities of the children early on in the franchise, can be blamed on the books being too labyrinthine to be condensed down into a 150-minute movie, and there are arguments to make as to whether each book would have been better off as a TV series, but it’s doubtful they’d have received such a hefty budget or impressive cast, or made nearly as much money.
Of the films, part 3, Prisoner of Azkaban, is widely regarded as the best, with director Alfonso Cuaron unleashing the franchise’s dark potential, redirecting away from Chris Columbus’ more child-friendly first parts, but personally I prefer part 4, Goblet of Fire, because it’s easily the most fun and structured, following the Tri-Wizard Tournament, and it has dragons in it, which are awesome. Parts 5 and 6 are, in my opinion, the weakest, with my reasoning being that I can barely remember anything that happens in them other than some character deaths and casting decisions, but the final films really kick things into gear.
Many have questioned the decision to split the final book into two halves, citing financial gain as being the true reason, but having seen the results I approve of the choice. Whilst the earlier books could stand to lose some of the lesser plot points without the plot suffering, the amount of closure given in the finale could not have been achieved with a similar level of editing. Whilst the total runtime for the final two films could have been a little shorter than the 4½ hours achieved here, getting it down to a length the core Potter audience would be willing to sit through without complaining would have resulted in almost catastrophic levels of cutting.

The most impressive aspect of the film franchise has always been the cast. Whilst the three leads, Daniel Radcliffe, Rupert Grint and Emma Watson, were never expected to be incredible actors (and, for the most part, lived up to this promise) the film studios ensured this wouldn’t be a problem by surrounding their stars with almost every British actor working today, with more added every film. To list them all would be senseless, but the fact that, Richard Harris’ untimely demise notwithstanding, every actor returned to their roles for every subsequent film shows that the films must have been great to work on too.The Deathly Hallows alone saw the inclusion of Bill Nighy, David O’Hara, Rhys Ifans, Ciarin Hinds and Nick Moran into a cast already including the likes of Ralph Fiennes, Robbie Coltrane, Julie Walters, Helena Bonham Carter, Alan Rickman, Jason Isaacs and Maggie Smith, and the fact that so many notable actors returned for such minuscule roles is incredible. Jim Broadbent, John Hurt and Emma Thompson are barely on screen, but the fact is they are.
Part 7 is the only one of all eight films not to feature Hogwarts, the wizarding school where our young heroes are taught, and therefore doesn’t feel like part of the Potter pantheon. Freed from the structure of lessons, Quidditch matches and Harry being picked on by Slytherin, the film feels a little meandering, as Harry, Ron and Hermione scour the country looking for a series of magical Maguffins, horcruxes, that for one reason or another must be destroyed to help bring down the evil Lord Voldemort. The film opens strongly, with Harry’s escape from his home assisted by his wizarding friends transformed to be replicas of him, but it’s not until a later infiltration of the Ministry of Magic that any more excitement is had. There’s an awful lot of tension and relationship issues, exacerbated by a locket that builds negative feelings in whoever wears it (so… put it in a bag rather than wear it?) and a particularly cringeworthy scene wear Harry attempts to alleviate some tension by dancing with Hermione in a tent, but it feels empty without the action-balance provided by the second film. The brief animation, depicting the origins of the Deathly Hallows that grant the owner power over death, is easily the highlight of the series in total.

If watched as one long film, the two halves join together to form a perfectly balanced picture, with the final hour-long battle a rewarding epic culmination after a mammoth build-up, so if watching make sure to set aside the best part of an afternoon, however just watching part 8 alone is also acceptable. The infiltration of Bellatrix Lestrange’s Gringott’s vault, with Helena Bonham Carter gleefully impersonating Emma Watson, is tremendous fun (there’s another dragon!) and now they’ve got all the teenage angst and worrying out of the way it’s time for good and evil to get scrapping. The finale is equal parts devastating and spellbinding, as the regular cast is treated with a sporadic survival rate, literally anyone is up for the chop, up to and including Hogwarts itself, as various sets we’ve grown to feel at home in are burned to the ground. Some aspects of the battle feel crowbarred in – Mrs. Weasley’s showdown against Lestrange, Ron and Hermione’s inevitable kiss – but for the most part it’s a cinematic marvel that doesn’t disappoint.
Harry Potter and the Deathly Hallows Part 1: Choose life: 6/10
Harry Potter and the Deathly Hallows Part 2 : Choose film 7/10
Harry Potter and the Deathly Hallows Part 1 & 2: Choose film 8/10

Mike Leigh’s depiction of acclaimed stage show writer and composer Gilbert & Sullivan (Jim Broadbent & Allan Corduner) creating their most famous production, the Mikado, is extremely well performed by all involved, especially the two leads and Timothy Spall as one of several preening thespians. The background is littered with know-the-face British actors (Andy Serkis, Dexter Fletcher, Mark Benton etc.) and the costumes and set design are spectacular. Unfortunately, the film is far too long, and too much time has been given over to the musical numbers, with at least ten being shown throughout the film. A much tighter script, focusing more on the backstage goings-on and less on the show itself, could have led to a bona-fide British classic about two of our most notable showmen.

The Great Escape, with chickens! For Aardman’s first feature length picture, Nick Park and his team borrowed heavily from a British classic, with the Hilts-esque Ginger (Julia Sawalha) and her Scottish accomplice Mac (thankfully not shot up against the fences) leading a brood of chickens to freedom after their tyrannical farmers make a switch from eggs to chicken pies. The parallels run deep, from the multiple escape attempts using homemade and stolen tools to a heavy American influence courtesy of Mel Gibson’s circus cockerel Rocky Rhodes, although I very much doubt that this was based on a true story. Other elements, from a Flight of the Phoenix inspired mechanical plane to a Raiders style hat gag (by law, every film featuring a vertically closing door must feature the hero sliding under it to safety, before reaching back to retrieve their fallen hat) all add to the fun, but I was annoyed at the farmers complete lack of concern that, not only were their hens wearing hats and scarves, but one of them was wearing glasses. Timothy Spall and Phil Daniel’s east end spiv rats were excellent additions too.
Choose film 7/10

Seriously? Potter? On the list? We live in a world where a Harry Potter film is voted onto a top 500 list and Hitchcock’s masterful Dial M For Murder isn’t? This is considered more essential viewing than Eastwood’s Mystic River? Doug Jones’ Moon? Adaptation? Motorcycle Diaries? Planes, Trains and Automobiles? No? Anybody? Fine.
END_OF_DOCUMENT_TOKEN_TO_BE_REPLACED 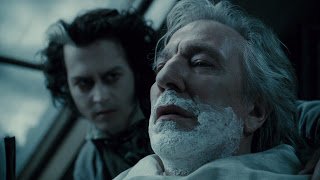 Who could resist a film featuring Alan Rickman singing about marrying his adopted daughter! Me, it turns out. Many have criticised the picture for being too gory, although its hard to see how Tim Burton could have avoided the flood of viscera required to depict the story of Sweeney Todd, a barber who murders his clientele by slitting their throats in a specially designed barber’s chair (That I must say did appeal to the mechanical engineer in me), only for their innards to be baked into pies served in the shop below the barber’s. So, instead of toning down the gore, Burton embraces it, commencing the show following a trickle of blood, luminous red against an almost monochrome London, as it drips, seeps and oozes through cracks, down gutters and into the sewers. It is clear from this opening that those of a weaker disposition should stick to a more family-friendly film, such as the Texas Chainsaw Massacre.
END_OF_DOCUMENT_TOKEN_TO_BE_REPLACED