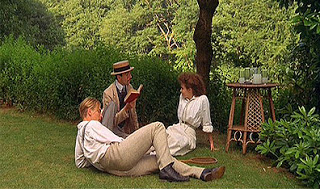 Featuring an unexpected amount of penises for a period film (or any other for that matter), this tells the story of Helena Bonham Carter’s upper class Lucy Honeychurch, who finds herself having to choose between two suitors; her betrothed, oily, irritatingly snobbish Cecil (Daniel Day-Lewis, over enunciating to grating effect) and Julian Sands’ playful, liberated yet of a lower social standing George. Obviously Lucy will choose the less pretentious and by all means friendlier George, overcoming the general repression of the times (a break-up is ended with a simple handshake), but the supporting cast makes this a worthwhile watch, from Maggie Smith’s unobtrusive Aunt Charlotte, Dame Judi Dench’s romance novelist, Simon Callow as the local vicar (and owner of one of the aforementioned phalluses) and Denholm Elliot as George’s forward thinking father. With so much talent surrounding them, it’s no wonder Bonham Carter and Sands struggle to shine, proving themselves to be merely audience ciphers.
Choose film 6/10