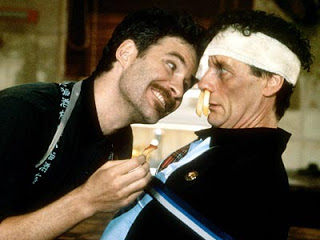 An Englishman named George Thomason (Thomas Georgeson, seriously), his American partner Wanda (Jamie Lee Curtis), her supposed brother Otto (Kevin Kline) and the stuttering animal lover Ken (Michael Palin) successfully perform a diamond heist, but an elderly witness dobs George in, and John Cleese’s henpecked lawyer Archie Leach is appointed to defend him. All of these people are liars, murderers, adulterers and thieves, most notable Curtis’ Wanda, who finds herself seducing everyone else to get her own way, with arousal via foreign languages being her only weakness. The film belongs to Palin and the Oscar winning Kline. Though the other performances are all excellent, the characters of the timid Ken and the philosophical but very, very stupid Otto are so comically rich that they deliver the most laughs, particularly when they share the screen, be it Otto declaring his undying love to Ken, or sticking ketchup-covered chips up his nose to extract information. Cleese should also be commended, if only for prancing around naked singing in Russian.