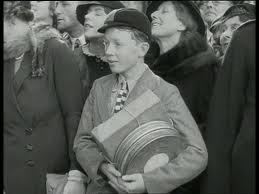 This early Hitchcock sees him dealing with familiar themes – espionage, deception, blackly comic beats and playful cinematic references – as a cinema owner (Oskar Homolka) acts as a terrorist agent in London unbeknownst to his wife (Sylvia Sidney) and her young brother, whilst Scotland Yard’s detective sergeant Spencer (John Loder) poses as the local greengrocer in an effort to catch the saboteur. The relatively slight length – a brief 76 mins – is still padded with background lines and squabbles, as Hitch unusually detracts from his otherwise straightforward plot. The greatest sequence involves the young Stevie (Desmond Tester) unwittingly transporting a bomb across town, only to be held up by a toothpaste salesman, a bus conductor and heavy traffic, with tension mounted with wordless cuts between the bomb, the boy, the obstacles in his way and every clock in the vicinity. The acting is top notch too, with more said in Homolka’s eyes than any line of dialogue.
Choose film 6/10