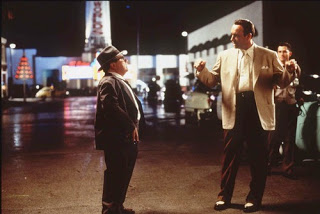 In 1950s Los Angeles, mob boss Mickey Cohen has been put away, and rival crime factions are warring for his place. Against this backdrop, three very different cops are following three very different cases; brutish Bud White (Russell Crowe) despises wife beaters and is more than willing to frame a suspect in the name of justice as he works as hardman for James Cromwell’s kindly police chief. Ed Exley (Guy Pearce) is the straight-laced, ambitious son of a deceased police hero, investigating a multiple homicide at greasy spoon the Nite Owl, whilst Kevin Spacey’s smooth headline-hunting NARC Jack Vincennes traces a lead found on a drugs bust, uncovering a ring of hookers cut to look like movie stars. Throw into the mix Danny DeVito’s sleazy journo, David Straithairn’s oily businessman and Kim Basinger’s high class whore with a strong resemblance to Veronica Lake and you’ve got a top notch cast all bringing their A-game in a stunning film with tight script and direction. Spacey especially is sublime, stealing every scene in a movie full of memorable ones. The little moments are the finishing touches – Exley removing his oversized glasses and pouting for a photographer, Vincennes bumping into a man he put away on the set of TV show Badge of Honor where he acts as technical adviser, but the big scenes – the masterful interrogation of 3 suspects, several showdowns and a final act with all guns blazing are the parts best remembered. Credit of the month: Ginger Slaughter.