Essentially a glorified B-Movie, Mad Max saw Mel Gibson break out as live wire hero cop Max Rockatansky in a not too distant semi-dystopian Australian future. Other than Gibson, and sometimes including him, the acting and scenes are straight out of a direct-to-DVD movie – see Max sitting bolt upright in bed, a red light illuminating his haunted eyes, or his looking under a sheet at the hospital, so I wonder whether this is memorable more for the creation of the character, a Dirty Harry inspired ‘bronze’ who’ll nab his victims by whatever means, and for the supposedly superior sequel (watch this space). 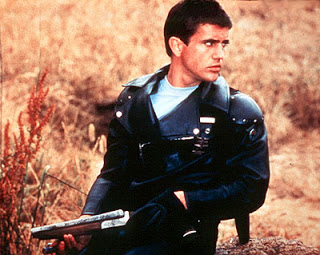 My main issue is that the character of Max is initially built up as being a kind of supercop brought in when no-one else will do, almost robotic in terms of getting the job done, and for the first scene, in which Max steps in to take out a cop killer and his girl when the rest of the force is lying in a heap of wrecked cars, this seems to fit, but for the next hour we see a completely different character, a family man in need of a break from his high stress job. It’s almost as though Gibson is playing twins. Annoyingly, it’s these more sentimental moments, making up the majority of the film, that prevent MM from being the guy’s night in classic it could well have become, for the scenes of brutality, chases and revenge have real potential.
Another problem is that the film has no real message. The gang of the man Max killed at the start end up tracking Max and his family, yet not because he killed their cohort, simply because they run into each other. It could so very easily have been a vengeance plot, but for reasons unbeknownst to all, this was omitted in favour of fate and coincidence.
Choose life 6/10