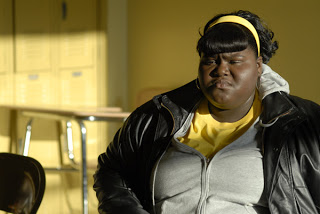 I knew what I was expecting when I sat down to watch Precious: being depressed, angered and infuriated by the action on screen, but doubtlessly impressed by the acting on display. Shockingly, I was correct, though thankfully most of the abuse was verbal.
Gabourey Sidibe (more recently seen in Tower Heist and The Big C, where I’m guessing everyone else on set spends most of their time working out how to pronounce her name) is Clarice ‘Precious’ Jones, a severely obese sixteen year old, pregnant with her second child as a result of being raped by her father again. She lives in a cramped apartment with her volatile, welfare-abusing mother (Oscar-winning Mo’nique, a revelation from a woman exclusively known for comedy until this point) in Harlem in 1987. Oh, and her first child has been nicknamed Mongo for suffering Down’s Syndrome. See, told you it was depressing.
Precious’ mother is a monster of Hannibal Lecter proportions, with every word calculated to bring the most destruction to her child. We hear such gems as “School ain’t gonna help none, take your fat ass down to the welfare,” “You will never know shit, don’t nobody want you,” and “I should have aborted your fat fuckin’ ass.” Charming. Many scenes are beyond difficult to watch, from the furious tirade aimed at Precious when her headmistress (“white bitch”) drops round after school, to the fantasies of red carpets and photo shoots that make up the only escape Precious has from her unbearable existence.
It’s not all crushing depression. Mostly, but not all, for Precious seeks to improve her situation, enrolling in an alternative school for kids who’ve fallen through the cracks, so there is light at the end of the tunnel, shone from three supporting adults, her teacher Ms. Rain (Paula Patton), the nurse’s assistant who helps delivers her baby (Lenny Kravitz) and her social worker (Mariah Carey). These last two choices seem like some fairly risky stunt casting, but it pays off, as though the singers aren’t likely to be bothering the Academy any time soon, they perform ably and selflessly in places you wouldn’t normally expect them.
Though well made, directed and shot, the subject matter at times feels like a particularly sobering episode of Jerry Springer, interspersed with some truly shocking moments that generally involve potential harm to Precious baby. But it’s not as miserable as first thought, and the performances on display are worth watching.
Choose film 7/10

1 thought on “Precious (based on the novel Push by Sapphire)”