Kubrick’s visionary ideas, social commentaries and moral dilemmas don’t quite gel with Spielberg’s family oriented sentimentality in this disjointed and overlong offering, conceived and planned by the former but implemented by the latter after his death in 1999. 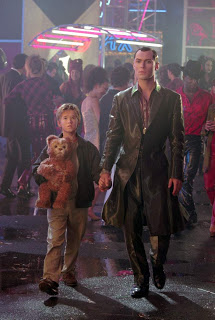 Now, I love me some robots. Whether they’re compacting waste into trash skyscrapers, travelling through time to save Sarah Connor or trying to kill Will Smith, you show me a film with robots in and I’ll watch the Hell out of it (though I’ve never actually seen the 20th Century Fox film Robots starring Ewan McGregor and Robin Williams, just never came around). There’s a robot clock watching me from atop a bookcase in the lounge, robot cushions on the sofa and a robot cookie jar whose head seems to rotate around and look at me wherever I am. But the key characteristic that joins these all together, is that they all look like robots, which is where A.I. looses my interest, for here they look like people. Yes, I know that’s the point. Haley Joel Osment’s mini-mecha David has been created to fill the hole left when his new parent’s son goes into a coma, and Jude Law’s robo-gigolo Joe (that’s fun to say) would be downright weird if he didn’t look a lot like a human, but that’s not what I want to see in a film about mechanical men. It isn’t until over half way through the film that we see some older models and exposed innards, and even then it’s far too briefly.

Osment is good, too good, as the automated child, and occasionally he passes for human, but for the most part he’s in full-tilt terrifyingly creepy mode, following his ‘mother’ Monica (Frances O’Connor) around the house all day, standing and watching her until she justifiably locks him in a cupboard. The first 45 minutes could quite easily be the start of a horror film, so disturbing is David: “I can never go to sleep, but I can lay quietly and not make a peep.” Nothing he does is endearing or even likable, but then I’ve always felt this way about children, but still the brief amount of time it takes for Monica to bond with this mechanised horror is jarring, especially given there seems to be no real scenario that draws them together. Also, David is only programmed to ‘love’ one parent, and his new ‘father’ Henry (Sam Robards) seems devoid of emotions, either for his comatose son or the new replacement, so that fits together nicely.

The movie is comprised of a series of episodes that, once passed, are all but forgotten. The story could have been interesting, and the world has potential for a more enthralling film within it, especially in the city scenes, and the brutal Flesh Fairs, where rogue ‘bots are hunted and tortured to a baying crowd’s delight, but over an hour of watching David desperately wanting to be a real boy becomes terminally dull. The future technology and gadgetry is generally good, subtle yet insightful, although the cars look a bit silly. And the ending is polarising, I found it terrible and unsatisfying, whilst Aisha thought that, whilst it seemed tacked on and unnecessary, it was still very moving.