Superman, the last surviving alien from the planet Krypton with god-like powers, has left the city of Metropolis that he has protected for decades to return to the last known whereabouts of his destroyed planet. Upon discovering nothing to be found where his planet used to be, he returns back to Earth, and re-assumes his alter ego of Clark Kent, a mild-mannered journalist for The Daily Planet. He attempts to rebuild his relationship with Pulitzer-prize winning co-journo Lois Lane (Kate Bosworth), but is annoyed to discover that not only is she engaged to their boss’ nephew (James Marsden), but she has a son, Jason (Tristan Lake Leabu). Meanwhile, having recently been released from prison, Superman’s former nemesis Lex Luthor (Kevin Spacey) is busy hatching a plan involving crystals found in Supe’s mysterious Fortress of Solitude.

I’m not a fan of Superman. There, I said it. I remember half-watching the 1978 Christopher Reeve version when I was younger, but I can tell you literally nothing about it, and I remember watching Superman Returns a few years ago, but I couldn’t remember too much about that either, other than the shot of Bosworth’s Lois ascending in an elevator, Spacey’s Lex Luthor being near water at some point and the shot of Superman being shot in the eye that was in the trailers. To be fair, that viewing was overshadowed by a rather eventful mid-film pee break.
I remember the rest of the day clearly. It was pretty much the first time I’d tried Pick’n’Mix sweets (I was aged 19 I think), and all I’d consumed so far that day was strawberries with orange juice for breakfast, a couple of glasses of Coca Cola, and several fistfuls of Pick’n’Mix. My student days were not necessarily the healthiest of times. About halfway through the film, buoyed by the saccharine high of the tooth-rotting goodies  I’d consumed, I desperately need a wee. So i nipped to the loo, and mid-stream I passed out, and woke up face down on the toilet bowl. This is a very unusual place to regain consciousness, and needless to say, once I re-entered the lounge and joined my housemates watching the film, I didn’t take too much of the rest of the film in, hence why I remembered so little. I promise that I don’t make a habit of passing out during films, although later that day something similar occurred during an advert break in The Long Kiss Goodnight, this times resulting in my collapsing face-up (again mid-urination), still clutching the 2″ thick acrylic shower rail I’d previously been using to steady myself, that had now been sheared from the wall. Don’t worry, other than my recent Looper adventures, the only other time I’ve passed out was last year, again during a period of relieving myself, but was not halfway through a film. It did require the purchasing of a new toilet brush holder, as apparently the one we used to own wasn’t designed to withstand 15 stone of unconscious man falling onto it.

Anyway, me fainting halfway through the first time I watched the film has nothing to do with whether I like it or not, I just enjoy retelling overly personal stories from my life that are at best tangentially related to the film I’m reviewing. No, what I don’t really like about Superman is that he’s just too powerful. His powers are seemingly beyond limit, with the only things he cannot do being the ones he hasn’t tried yet. He has flight, x-ray vision, super speed, strength, laser-eyes, time-travel, advanced hearing, super-whistling, fucking everything. And he only really has one weakness; Kryptonite; an extremely rare green rock. Which basically means that if people don’t know about this weakness, or there isn’t any of the super-scarce emerald stone around, there’s pretty much nothing in the way of Superman saving the day. I never really got into Smallville, even though I was pretty much slap-bang in the target demographic when it came out, and I can’t even get excited about next year’s Man Of Steel, even with Zack Snyder directing and Christopher Nolan producing. Needless to say, this film was going to have it’s work cut out if I was going to be impressed by the end of the viewing. 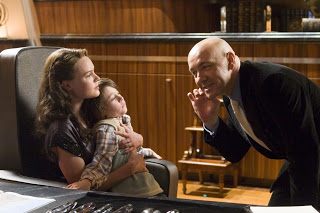 Initially I was intrigued by the film, as it has an interesting and somewhat eclectic cast. Kevin Spacey is perfect as Luthor, taking over from Gene Hackman. Spacey is his usual dependable self, and it at his best when in full-on bad guy mode, which is most certainly the case here. Elsewhere, Eva Marie Saint was a nice touch as Martha, Clarke’s adoptive mother, though disappointingly she doesn’t really get a lot to do, as is also the case with Frank Langella’s Perry White, Clarke and Lois’ boss. James Marsden once again plays a man caught on the cold side of a love triangle between the film’s hero and heroine (see also The X-Men trilogy, The Notebook, Enchanted), and Parker Posey is always a welcome addition to any cast, here playing Luthor’s sidekick/partner/main source of annoyance. Oh, and Kal Penn’s there too, but I’m fairly sure he never actually says anything, and [TINY SPOILER] is given a terrible cop out death with Luthor’s other two goons at the end [END OF TINY SPOILER].

Where the casting really falls down though is with the leads. Kate Bosworth, aged 23 when the film was released, looks far too young to play a Pulitzer Prize winning journalist, and seems dwarfed even by her own clothes. She also displays practically no likable qualities – she frequently dissolves into childish hissy-fits and strops whenever she (justifiably) doesn’t get her way. Brandon Routh, on the other hand, looks the part of both Superman and his public identity, but whenever he tries to act he appears to be made more of wood than the steel of his nickname. And in the many, many CGI shots of him flying or in danger, the film seems to become a late 90s video game, so terrible are the graphics. Most egregiously, the film’s final shot is one such diabolically bad render. Even in some of the non-CG shots Routh appears to have a plastic-like finish, possibly to make him look more similar to the computer generated bits.

Another part that really bothered me was that the film is clearly set in modern times, with space shuttles, airplanes, videocameras etc. all being integral to the plot, but the architecture and fashions all seem to be stuck in the 1920s, up to the point of large sections seeming like they were shot in sepia. This is none more clear than in Parker Posey’s outfit in the car sequence. Adding the newspaper-room setting reminded me heavily of The Hudsucker Proxy, a film I liked a great deal more than this one, and which inspired me to suggest Jennifer Jason Leigh as Lois, although Amy Adams’ casting is possibly the only thing I approve of for the next film. I can see where director Bryan Singer was coming from with the mix of old and new styles, but it never really worked for me, and I found the whole thing very jarring. The overall plot was mostly just silly too, and various minor plotlines – the one involving Lois’ son for instance – felt unsatisfying and, at times, just plain stupid. The first 60% of the film seemed to drag too, as Lex’s plot is kept a mystery, and there doesn’t seem to be too much for Superman to really fight against. And part of the finale, in which lives hang in the balance of a fax machine’s volume, is not quite dated yet, but will be very soon. And who the hell puts a snooker table on a boat? Seriously.

There were some nice touches though. I approved of the little in-jokes for superhero fans (a news reporter mentions that they’ve received a message from Gotham), and the moment where Clarke pretends to be a bit confused and muddled to but Lois off the scent was good. The shoehorning-in of the “It’s a bird, it’s a plane…” line was clumsy, but still managed to raise a smile from me, even if it was accompanied with an eye-roll. The destruction of a model railway town may not sound like the grandest action set-piece in a film, but for me it was the highlight here, with it being shot in a similar fashion to a Roland Emmerich film. That one short sequence was more entertaining than the entirety of 2012, I can tell you.Elsewhere, some camerawork really disappointed me – a shot heading over a balcony and down, to focus on Lex reading a newspaper felt clunky and jerky – but this was more than made up for by the visually stunning space-set opening.

The viewing of the film was worth it to finally discover the origin of two Adam Carolla Show sound effects (“Wrong!” and “You’re losing your hair,” for fellow regular listeners), but sadly other than this point I was thoroughly underwhelmed by the whole thing. All being well, my low hopes for the upcoming Man of Steel may result in me being pleasantly surprise. Here’s hoping.