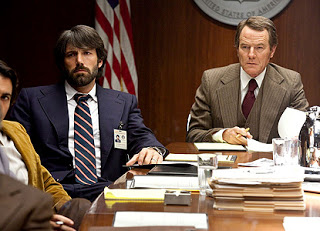 In the last days of the 70s, Iranian militants take over the US Embassy in Tehran taking everyone inside hostage. Unbeknownst to them, six Americans managed to escape, and were able to covertly make their way to the Canadian ambassador’s house (after being turned away by the New Zealanders and those pesky Brits). After hiding out their for weeks, never going outside for fear of being seen and executed on sight, it soon becomes clear that the CIA must make a move to ‘exfiltrate’ these citizens. Tony Mendez (Ben Affleck), their top exfiltration specialist, comes up with a plan to pull them out, by pretending to be a Canadian film crew scouting locations for a new sci-fi B-movie called Argo, and to make the story more convincing, Hollywood needs to get involved.
Who would have thought Ben Affleck was going to turn into a brilliant director? Personally I’ve got nothing against the man, acting-wise. He’s never been necessarily remarkable, and indeed he’s by no means the best part of this film, but as a director he’s become somewhat accomplished. Gone Bay Gone and The Town were both very good, but here I feel that Affleck has really stepped up his game. It turns out that he may well be a better film maker when he leaves his native Boston. In my mind he has joined the ranks of George Clooney and Clint Eastwood as successful actors-turned-self-directors, and his directorial style is very similar to theirs too. There are few cheap tricks and stylistic flourishes here, instead Affleck approaches film making in a workmanlike fashion, telling the story quite simply, and keeping the balance of sly humour and intense drama even. 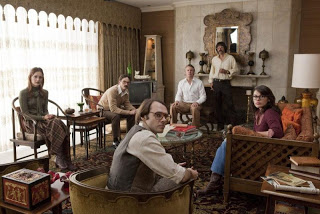 He is ably supported by a stellar cast comprised of seemingly every character actor available. There’s a type of actor known as a the 27%ers, who though they tend not to be on the Hollywood A-list or perform in many leading roles, they instantly make a film 27% better just by appearing in it. The problem with this film is that there’s just so damn many of them that the sheer laws of statistics makes this film far greater than 100%. There’s John Goodman, a particular favourite of mine, playing real-life make-up artist behind such films as Planet of the Apes and the Star Trek series, Alan Arkin as a director whose every line in quotable comedic gold, Bryan Cranston as Mendez’s boss in the CIA, and Rory Cochrane, Tate Donavan and Clea DuVall amongst the Americans hiding in Iran. Not to mention the likes of Victor Garber, Bob Gunton, Kyle Chandler, Titus Welliver and Scoot McNairy, as well as Philip Baker Hall and Richard Kind popping up in far too brief sub-cameos. One problem with this though is that I was continually distracted by the seemingly neverending tide of familiar faces, but it must show the strength of Aflleck’s directing skills and the script that such an incredibly ensemble could be achieved. It’s for a similar reason that I’m looking forward to Spielberg’s upcoming Lincoln, as judging by the cast alone that film will definitely exceed 100%, or at least four score and seven. 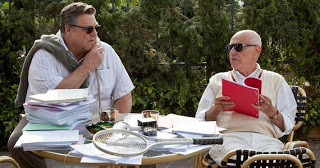 The story in Argo (the actual film, not the fairly crappy looking fake film with the film) could well be the most tense I’ve ever seen. If I’d had more leg room, I’d have been on the edge of my seat for approximately 70% of the picture, basically all of it that isn’t set in Los Angeles. Whilst this shows an almost Hitchcockian ability to crank up tension, it soon became exhausting, and by the film’s climax I truly felt like I’d been through a similar situation to the escaped hostages in Iran. Thank heavens then for Goodman and Arkin as Mendez’s Hollywood-based cinematic insiders, who between them provided some much needed comic relief in a story that otherwise would quite possibly have induced a heart attack in me. I imagine the plot was expanded from the original true story somewhat to allow more screen time for the more comedic aspects, and also to give the likes of Goodman, Arkin and Cranston a bit more time to expand upon their otherwise thin characters.

The film’s finale may have suffered from being Hollywood-ised a little, making everything seem a little more of a close call than probably happened in real life, and there were maybe a few too many characters to give them all enough time to make an impact, but correcting these minor flaws would probably have negatively effected the film in other ways, so they are easily forgiven.

This seems like a film half dedicated to 70’s espionage thrillers, and half an attempt to make one itself, with a good old fashioned white-men-versus-foreign-terrorists plot, but underneath there is some wonderful film making here, from the introductory story-boarded hand drawn expositionary set-up cards, to the intercutting between a Hollywood script reading of the terrible fake movie and the real life reading of demands and threats by the hostage takers, juxtaposing the tragic circumstances of the hostages with the ridiculous nature of everything in Hollywood.

Basically, this is a far better film than I was really expecting. If you enjoy good films, go see this one.