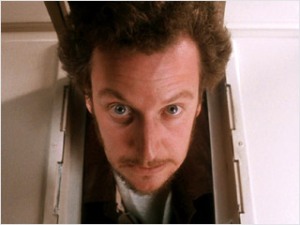 Everybody has their own favourite Christmas films, and more often than not they tend to be those watched every year during your childhood. The ones you can quote line for line, and aren’t ashamed to admit you love. That’s the beauty of the Christmas film, by their very nature they almost have to be sappy, family-friendly, it’ll-all-be-OK-in-the-end schmaltz, and some are so much the better for it. Whilst A Christmas Story may not be my personal favourite, I can absolutely see why others may adore it, and you give me National Lampoon’s Christmas Vacation, The Muppet Christmas Carol or Elf every day of December and you’ll find it a difficult task to prise me from the sofa. But this post isn’t about any of those film, it’s about a series of films, all set over the holiday period, which I feel I should write about, because I love them so much. That’s right, it’s Home Alone.
Growing up, I must have watched Home Alone and its sequel, Lost in New York, every Christmas since about 1995, but for some reason or another I hadn’t seen either of them for a good few years, so earlier this year I spotted the 4-disc boxset in my local second-hand DVD store for far less money than I would have been willing to pay, so I made a swift purchase and shelved them aside, looking ahead to Christmas when numbers 1 and 2 would be watched for the umpteenth time, and parts 3 and 4would be seen for the first. Well on the weekend before Christmas the time finally came, and was made all the more special by it being my girlfriend’s first viewing of all of them (quickly followed by her first viewing of The Muppet Christmas Carol, although I’ve yet to sit her down for Christmas Vacation).

Before watching, I was slightly apprehensive as to whether the first two films would live up to my memories, but I can attest that they are still amazing. There’s something about spending a considerable amount of time setting up the premise – Kevin McCallister (Macaulay Culkin) is, through a series of coincidences and mishaps, left alone at his family’s palatial home over Christmas whilst they are holidaying in Paris. After coming to terms with his situation and learning how to take care of himself and the house, his troubles are deemed far from over when two bumbling crooks, Harry and Marv (Joe Pesci and Daniel Stern), pick the McCallister’s apparently empty house as the perfect target for a little festive theft, so Kevin must use every trick at his disposal to stop them.
This is the very definition of a film of two halves. The first half outlines Kevin’s predicament – his family waking up late after a downed power line, confusion at the taxi head count and rushing through the boarding gates – and introduces our hero’s nemeses, gradually setting up the life lessons that Kevin will have learned by the end of the film – the importance of both independence and family, ingenuity and friendship – whilst the second half is a monumental payoff, with the two crooks getting absolutely everything they deserve in a masterpiece milieu of slapstick, gurning and cringing (the nail through the foot, always the nail through the foot!).
The sequel manages to recreate the same sense of wonder and excitement at the prospect of being allowed to run amok with no adult supervision, but this time gives Kevin not just his home town to play with, but the entirety of New York City, complete with a grand hotel and a magnificent toy store to muck about in. Although the structure is almost exactly identical – Kevin argues with his family, is separated from them, thrives on his own, befriends an apparently scary local loner, runs into difficulties, thwarts the plans of Harry and Marv, rigs a house full of wince-inducing booby traps, uses the aforementioned friend to catch the thieves before being reunited with his family – it remains fresh by approaching each aspect in a new and interesting way. And it features Daniel Stern being hit in the face with a brick, four times. Stern’s subsequent defiant yell of “Suck brick, kid” when he is presented with the opportunity to retaliate is one of my favourite moments in festive cinema, up there with Jimmy Stewart’s life-affirmed canter through Bedford Falls and Andrew Lincoln’s title card confession to Keira Knightley. And Buddy the Elf being hit by a car.
The real universal joy of these first two films lies partly with the heartwarming morals and happy endings, colourful characters and the triumph over adversity of not just a child alone at Christmas, but his parents’ desperate attempts to reunite the family, but personally I believe the true unique quality that sets this duo apart from other festive fare is the violence, of which almost the entirety is directed towards Harry and Marv. Throughout the films they endure enough torment and torture to kill them many, many times, be it from five-storey falls onto concrete, toilet bowl explosions (after an impressive handstand from Harry), being crushed by numerous heavy objects (the nose-bending tool chest down the stairs is a personal highlight) or just being conked on the back of a head with a snow shovel. The beauty is, no matter how much the pair are put through, they can always get back up again and continue their chase of the kid at the other end of the string those paint cans are tied to. It’s a live-action cartoon, and made all the better by the expressions Pesci and Stern are able to contort their faces into. Pesci’s acting decision to channel Muttley in the second film does tend to throw me a little, but it fits the feel. 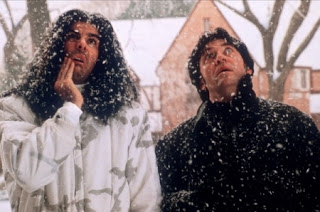 This love in the first films of all things potentially disabling and dismembering was surely the reason for my high hopes for parts three and four. I had of course heard that these films were sub-par at worst, and disappointing at best, but I had assumed this would be because the film-makers hadn’t understood that you need to have that balance of the gentler, expositionary first half, before the riotous free-for-all of a conclusion. I’d anticipated the directors (The Smurfs’ Raja Gosnell and Teen Wolf’s Rod Daniel, rather than Chris Columbus) would have settled for the most basic of premises before unleashing a never ending torrent of flamethrowers, anvils and rocket-packs, but it turns out I could not have been more wrong. Instead of the expected violence-fest, there was a seemingly endless amount of set-up with so little pay-off I almost missed it completely. Home Alone 3 at least puts a little effort in, but the traps set are far less ingenious and incapacitating than in the previous installments, with at one point of the crooks (four this time, none of whom have done enough to remove Home Alone 3 from their top four films on IMDb) being forcibly restrained by nothing more than a weak hose pipe going off in his face, and they all go through a lot worse than what ultimately immobilizes each of them. Also, where in the first two films Kevin’s isolation was accidental, here Alex (Alex D. Linz) is left home alone on purpose, and only for a few hours at a time, when he’s home sick, his parents are at work and his siblings (including a young Scarlett Johansson) are at school. The fact that at the end of every day the rest of his family comes home to surround him with safety kind of ruins most of the tension. My main issue though, other than the lack of Daniel Stern and Joe Pesci, or a John Candy/Tim Curry-style comedic actor in a supporting role, is that the villains are international terrorists on the trail of a misplaced microchip hidden inside a remote control car Alex has recently acquired. The first times around the crooks were a pair of bumbling ne’er-do-wells who couldn’t find a bag of cement if it fell on their heads, so their being bested by a bratty kid is almost plausible, but this time the crooks come equipped with enough plans and gadgetry that it just becomes silly, and not in the way it’s supposed to.

All of this is fine, however, in comparison to Home Alone 4, a film which justifiably was only released as a TV movie. It tries to bring back the character of Kevin McCallister (Mike Weinberg, hands down the worst child actor I’ve seen) and Marv (French Stewart), but this time Kevin’s parents are separated, and Kevin runs away to spend Christmas with his Dad (Jason Beghe) and his mega-rich new girlfriend (and potential fiancé) Natalie (Joanna Going). Natalie lives in an ultra-modern, remote controlled house complete with a butler and maid, and the British royal family are coming to stay for the festive period. Marv and his girlfriend Vera (Missi Pyle) plan to kidnap the young prince, but weren’t expecting the young Kevin to be around and get in the way. I have four main problems with this film, other than the aforementioned acting talent on display. The predominant one is that, in a film series called Home Alone, and in which the previous three installments have all featured a child being abandoned and left to fend for himself; at no point in this film is Kevin actually alone. The maid and butler are always there somewhere, and if they are ever both unavailable for assistance, this isn’t made clear until after the events have taken place, so you spend the entire time just waiting for help to arrive. Secondly, there’s a twist signposted early on that so obviously wants you to think one thing that the only possible alternative becomes abundantly clear, yet is portrayed as a dramatic surprise when it is eventually spelled out. Thirdly, this is a film in the Home Alone series, yet there’s barely any traps laid out for the crooks to fall into. I’m going to spoil it a little now, but I strongly advise you not to watch this film, which makes it OK in my book. The whole point of the Home Alone films is for a kid to find novel ways to injure trespassers using household objects and toys, but this is almost entirely ignored. The only trap Kevin actually sets is a large frying pan rigged behind a door to bash someone in the head, and he even has to stand next to it to release it. Granted, seeing French Stewart being smacked in the face with a swinging pan is still pretty damn funny, but I really wanted more. A stereo playing one of the crook’s voices doesn’t make sense, and setting up a revolving bookcase to spin faster when there’s people trapped inside is nowhere near what could have been achieved with so much gadgetry to hand. Oh, and the elevator that can’t go up so gets stuck between floors? Well why not just go down or force the doors open? Ridiculous. Anyway. My fourth and final problem is the film’s final shot, when Kevin looks into the camera and instructs his voice-activated remote-control, that apparently only controls the house, to alter the weather patterns and make it snow. I hate this kind of thing, and this may well have just replaced Sex and the City 2 as the worst film I’ve ever seen.
So, other than one smirk-inducing frying pan to the face, there is absolutely no reason to watch Home Alone 4, and don’t bother with part 3 either, just watch 1and 2, every Christmas, forever.
Home Alone: Choose Film 8/10
Home Alone 2: Choose Film 8/10
Home Alone 3: Choose Life 3/10
Home Alone 4: Choose Life 1/10

8 thoughts on “Violence is Funny”