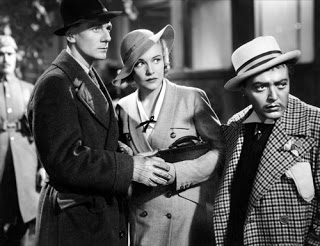 A funeral is being held for British World War I soldier and novelist Brodie (John Gielgud). The thing is, he isn’t dead, as Brodie has been recruited as a spy and renamed Richard Ashenden, and is being sent by the Q-like R (Charles Carson) to Switzerland in order to apprehend and kill a German spy, with the help of an overzealous assassin nicknamed The General (Peter Lorre). Upon arriving in Switzerland, Ashenden discovers a woman has already booked into his room, saying she is his wife, and when he enters his room he finds her to be the not-too-shabby form of Elsa Carrington (Madeleine Carroll), a fellow agent posted to assist Ashenden, but she is already entertaining another guest at the hotel (Robert Young). The three spies must work together, despite not necessarily all getting along, in order to find and stop their adversary before he completes his mission.

When I set out to watch all of Alfred Hitchcock’s films, I didn’t expect to find quite so many of them to be difficult to get hold of, seeing as he is widely regarded as one of, if not the, greatest director of all time, yet when I tried to add all of his filmography to my LoveFilm queue, I discovered fifteen of his films to be unavailable, including this 1936 outing. So when, one rainy Saturday afternoon, I spotted this playing on ITV4+1, I once again rejoiced at not having an overly busy weekend planned ahead of me. However, had I not been able to track this one down, other than a few memorable sequences it would not have been a huge loss, as this is far from groundbreaking stuff, especially with regards to the plot, which relies pretty heavily on chance and insanity to get by.

You see, when Ashenden and The General, who does have a name but it is too long and ridiculous to even be found online, begin looking for their culprit, they don’t have much to go on until they discover a clue, by chance, which then leads them to a suspect by sheer blind luck, and at a casino no less. Very little espionage and detective work is actually accomplished, which is fair enough when you consider that Ashenden is entirely inexperienced in that line of work, but The General is supposedly a professional, and surely there must have been some reason why Ashenden and Elsa were recruited? One major flaw that I still cannot get past is a seemingly psychic link that a man shares with his dog, who seems to be able to tell exactly what is happening to his master from miles away, and is able to react in a way that can cause intense worry and despair to all those in the vicinity of said canine, even when they cannot have the slightest clue as to what the dog is reacting too. Its only a very small moment in the film, but it is so very silly and out of place that I cannot help but comment upon it.

Hitchcock was clearly up to his usual mischievous ways with the audience with regards to the dialogue of this film. Most of the exposition takes place in huge blocks of conversation, making it very easy to miss a vital clue as to what’s going on, whilst elsewhere discussions are missed entirely when they are probably purposefully drowned out by loud noises, such as the ringing of bells in a church tower or heavy factory machinery. This did make it an effort to keep up with what was going on – it was a while before I fully understood why Ashenden was even in Switzerland to begin with – which I’m positive was Hitchcock’s intention, it just came off as a bit annoying.

But when the topic of annoying aspects about this film comes up, the prime candidate has to be Peter Lorre. The man has never been accused of being subtle when it comes to acting choices or characters, and his General is a randy, bug-eyed, hot-headed, masochistic psychopath who makes Elsa justifiably uncomfortable whenever he is in the room with her. He descends into a rabid frenzy when he discovers Ashenden has been ‘issued’ a wife for their mission, whilst he is posing as a bachelor, and he comes off as beyond a caricature, with his weedy little moustache, ring earring and broken English (“Someone did not very much want we to speak with him”).

The relationship between Ashenden and Elsa also rings false, and in fact the film feels like a series of circumstances contrived purely to throw these two mis-matched and initially mutually frosty individuals together, so their hearts can melt and they’ll fall in love with one another – only of course they won’t realise it until the final reel. Her involvement in the case is almost negligible, as for the most part she simply remains around the hotel whilst the menfolk go about handling the heavy lifting, meaning all Elsa really gets to do is offer a moral standpoint about the whole thing, and be someone for Ashenden to be concerned about.

However, as I mentioned earlier there were some memorable set pieces, the best of which were a scene on a moving train full of German soldiers and an almost wordless chase through a chocolate factory (this being set in Switzerland, there is also a scene on the Alps), although the chase does feature one of the most rigid examples of pursuers stopping at the top of a stairwell and pointing in a “Look, they went that-a-way” style. I also approved of the ominous music when Ashenden and The General enter a church early on in their case, and when they discover the source of the music is in fact a body slumped on the organ in exactly the right way to play exactly the right ominous notes to fit the moment. Other than these little moments though, I cannot really recommend this film, especially when the great director has made so many better ones in the same genre.