Pampered pet rat Roddy St. James (Hugh Jackman) may appear to live the life of luxury with his lavish Kensington home, gargantuan television and high class lifestyle, but his existence is lonely, and he craves companionship. When his owners leave him for a few days, his world is rocked by the arrival of loutish hooligan sewer rat Sid (Shane Richie), who takes over the house and ridicules Roddy’s way of life. Roddy’s plan to evict Sid – via the toilet bubble bath – goes awry, and results in Roddy being flushed instead, leaving him lost in the vast underworld of London’s sewage system, where he becomes intricated with Kate Winslet’s tomboyish Rita and a plot involving a royal ruby, a computer cable belt and a mysterious plot concocted by sewer mafia boss The Toad (Ian McKellen).

The fact that a film is British should not be reason enough for me to like it. However, if it is made by Aardman, widely regarded as the Pixar of the UK (something I tend to agree with), then I do have a tendency to at least try to like it more. This is the case with Flushed Away, Aardman’s third and final collaboration with Dreamworks Animations, and also their first to be completely digitally animated, rather than using their traditional stop motion technique. Apparently the reasoning behind this was due to the volume of scenes involving water, something believed to be extremely difficult, costly and potentially damaging when animated using stop motion, however it looked great when Aardman used copious amounts of water in the recent Pirates! film, although this could have been more down to the style used and technological advances since the production of Flushed Away. As much as I tend to love everything Aardman puts out, from Wallace and Gromit to Chicken Run and the aforementioned Pirates!, Flushed Away to me felt lacking in the creativity and ingenuity I have come to expect from the studio, and it’s also just plain not funny. 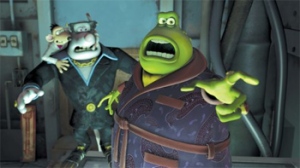 In fact, I became so nonplussed with the film that I actually started a tally for how many times I laughed. A common requirement for a decent comedy is at least six laughs – a number I find depressingly low – but for the sake of argument Flushed Away technically passes, because I noted a grand total of seven audible laughs throughout the duration of the film. However, there were a great deal more clear attempts at humour that in my eyes just fell flat. On two separate occasions Roddy is put through a series of hit-in-the-groin gags worthy of Idiocracy‘s increasingly plausible future, and elsewhere there are various recycled jokes that weren’t funny the first time around, let alone the third, mostly provided by Richie’s Sid and the Toad’s inept henchmen, voiced by Andy Serkis and Bill Nighy. The only areas I found genuinely chuckle-worthy were the team of French frog-ninjas (“To action!” “We surrender!”) and the singing slugs, which are possibly the animal voted least likely to ever be called adorable, yet manage to be just that. However, these joke wells were oft-visited throughout the film, and there’s only so many times I can laugh at the French being called cowardly or lazy (three, it turns out). I will, however, never, ever, get tired of the notion of slugs high-fiving.

Despite animating in a different medium, the guys at Aardman wisely decided to retain their familiar style of character design. They’ve never been accused of being overly realistic, and this gives their characters a friendlier, more approachable style, plus actually watching photo-realistic rats scurrying around the faeces-strewn sewers of London would be far less visually pleasing. Where the style differs greatly from their other films though is in the unnatural glossiness that everything seems to have, as though it’s all been slightly photoshopped and polished. This isn’t the Aardman aesthetic I’ve come to know and love – I miss the thumbprints in the plasticine. The whole thing plays too broadly as well, and whilst I’ve got no issues with the film proudly proclaiming it’s British roots (it turns out the Toad is a former pet of Prince Charles, and the jewel he desires fell from the crown of Queen Elizabeth), but it all goes a bit too far when you give Winslet’s character Union Jack trousers as if she’s auditioning to be in the Mice Girls. Also, I’m always annoyed when English characters are depicted stereotypically in American films (Independence Day is a particular culprit of this), so I feel the pain of any Americans who are offended by the brash US tourist rats here, obsessed with making a beefeater move, or complaining that the football game they are watching doesn’t have a quarterback in. It’s possible I’m being overly critical of the humour in a children’s film, but I’ve come to expect more from Aardman.

If there is a saving grace to be found, it’s in the cast. Every character has been cast perfectly, although Winslet is a little underused, and I can’t help but think Hugh Jackman should have been replaced with an Englishman, given this is otherwise a very English film. It did however allow for a great blink-and-miss Wolverine costume gag early on that I did appreciate. Jean Reno as Le Frog was a particular highlight, but Kathy Burke, David Suchet and Miriam Margolyes were utterly wasted as Rita’s family. I also approved of the creativity in shrinking everyday items down to rat-size, something I always take note of in films like this, such as The Borrowers. Here we get a pencil-legged sea rat, a boat powered by bicycle chain with tennis ball buoys, and a lovely wave to the Terminator franchise with a mechanical reaching hand. I can’t help thinking that the climax, involving multiple toilets being flushed on screen, must have been almost unbearable to sit through in a cinema without nipping to the loo, even with the otherwise scant 80-minute runtime.

1 thought on “Flushed Away”