Fred Hill (Henry Kendall) is tired of his lot in life. He works a dull job, which he travels to on a packed commuter train, and comes home to a small apartment where he and his wife Emily (Joan Barry) own little in the way of extravagant luxuries. Fred doesn’t think it’s fair that they don’t have expensive things, so he contacts his uncle, who is willing to allow Fred and Emily to have their inheritance now, before he dies, if it will make them happy. This prompts the now-happy couple to board a cruise ship and journey the world, but they discover they might have been happier when they were poorer. 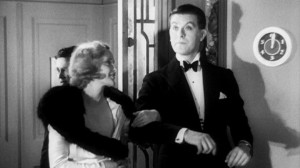 As genres go, I’m not sure that comedy is best suited for Alfred Hitchcock. The man himself was apparently something of a comedian and a prankster, and though he has made some other comedies I’ve seen and liked (Family Plot, The Trouble with Harry), his strengths most definitely fall elsewhere. It could simply be a case of all the comedy on display here has been repeated so many times that it barely even seems like humour any more – Fred’s seasickness exacerbated by the idea of gorgonzola cheese or cream sherry trifle, the sex-crazed, bird-like old maid aboard the ship (Elsie Randolph, who looks rather like Charles Hawtrey) – and elsewhere the film’s messages are about as subtle as being hit by a cruise ship. 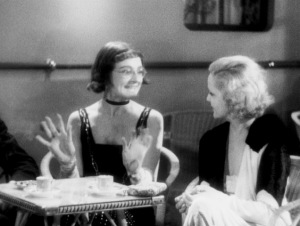 The moral of this film is quite clearly the grass is always greener on the other side, and the film goes at great lengths to spell this out. For you see, it isn’t just their monetary situation that Fred and Emily are initially displeased with, it is also their significant other. At the first opportunity both jump into the arms of another whilst aboard the ship – Emily befriends Commander Gordon (Percy Marmont) when she is left alone during Fred’s seasick days and, upon recovering, Fred sees his wife with another man and soon falls in with a wealthy princess (Betty Amann). By the end of the film, however, enough events and contrivances have occurred to drive these two back together and home again, at which point they both seem to forget the other’s infidelities, or their own happiness with someone new.

I’m always a fan of early special effects, and there is a scene where text floats from Fred’s menu, that could well be the earliest inspiration of PowerPoint text effects, and I was also impressed with the transition from white spots in front of Fred’s eyes to being bowls laid out on a table. I’ve become accustomed to the poor audio quality in Hitchcock’s early films, so the inaudible conversations being drowned out by music or nautical noises was nothing new.

This is kind of like a 1920s Eyes Wide Shut on holiday, with less sex cults and more cat eating. I’m not an Eyes Wide Shut fan (although I’m willing to give it a second chance when the List dictates), and overall this film fell flat for me. The messages were too blunt, the comedy not comedic, and bizarrely I found myself missing the shopping montage that would normally follow the main characters coming into a large some of money.

2 thoughts on “Rich and Strange”