The Top 10 lists are back! Apologies for the recent extended break I’ve unintentionally taken from posting anything, I was waiting for my housing situation to resolve itself but that doesn’t appear to be happening anytime soon, so I may as well get back to typing. Anyway, as I said, the Top 10 lists have returned, and this time with something a little different. Normally, I’d list of ten films, or scenes, or characters or whatever, but this week – and every so often after – I’m looking at just one film in particular, as a celebration for how much I love it. The prestigious honour of the first film goes to a movie I championed for the most recent Movie of the Month poll over at the Lamb. Due to it being so amazing, the film won with a landslide victory, and I was able to host an episode of the Lambcast on it, which can be listened to here.

So what is this film, I hear you ask? Well, it’s Demolition Man, the 1993 action/crime/sci-fi/comedy directed by Marco Brambilla, produced by Joel Silver and starring Sylvester Stallone, Wesley Snipes and Sandra Bullock. The basic premise sees Stallone’s sergeant John Spartan, a renegade cop in 1996’s burning L.A., track down Snipes’ Simon Phoenix, a psychopathic killer. During Phoenix’s arrest, Spartan is incorrectly blamed for the deaths of Phoenix’s hostages, and both men are sentenced to prison, but not just any incarceration. No, they are cryogenically frozen and mentally ‘reprogrammed’ to become better citizens, with the intention of thawing them out many years in the future. In 2032, Phoenix is thawed out for a parole hearing, but escapes the prison facility and goes on the run. The police force in the now-peaceful future utopia are ill-equipped to deal with Phoenix’s brand of mindless violence, and so Spartan is defrosted to help catch him.

So, without further ado, here’s my Top 10 reasons why I love Demolition Man: [Spoiler warning] 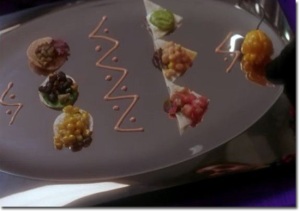 In the 36 years of Spartan and Phoenix’s cryogenic incarceration they missed many events in the outside world, including an earthquake that claimed Spartan’s wife, and the restaurant wars. In the wars, only one restaurant chain emerged victorious, and that chain is Taco Bell. Now, Demolition Man was my first ever introduction to this fast food chain, because as far as I’m aware they don’t actually exist in the UK. So Demolition Man has the claim to fame of enlightening me with regard to this cornerstone of public knowledge I’d otherwise have never known of. 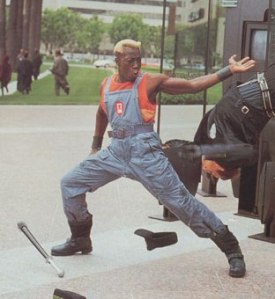 Actually, that’s wrong, there isn’t really much of a soundtrack to this film. There’s an end credits song by Sting that was re-appropriated for the film (and is where the movie gets it name, with a few awkward references to John Spartan’s nickname being the “Demolition Man”, seemingly because he blows a lot of stuff up), and a lot of mid-90s American radio commercial jingles that have become popular as music in the future. No, I like the sound effects used in the fight sequences, predominantly an early one in which Phoenix takes on a squad of future-cops. Every punch and kick is accompanied with the onomatopoeic THWACK!, ZAP! or SOK! that you’d otherwise expect from the 1960’s Batman TV show, and which were all clearly made with a cheap Casio keyboard. They date the film heavily, but they’re also really quite fun. You see, I view this film as far more of a comedy than perhaps was intended, but hey, it’s how I enjoy it.

The world of 2032 San Angeles is set up as a fairly prudish society, where bodily contact if all but forbidden, and intercourse takes place in an unusually distant manner, but more on that later. There’s a scene where this is clearly pointed out, which is immediately followed by a scene in which Spartan goes to his new apartment and, within minutes of sitting down, receives a lifesize whole-body phone call from a wrong number, but not just any wrong number. No, this is a naked woman (Brandy Ledford, Vicky the hooker from Rat Race!) who has incorrectly dialled her booty call for that evening. The moment comes so out of the blue that it’s jarring, but is appreciated nonetheless.

Speaking of which, this is the scene that immediately precedes that phone number. Spartan and Sandra Bullock’s Lieutenant Lenina Huxley have gone to her apartment to have sexual intercourse, which for Spartan means the more traditional “hunka-chunka” fluid transfer method, but for Huxley involves helmets, towels and being the other side of the room from your partner. You see, sex in the future in undertaken via arousing images and flashing, epiplepsy inducing colours and sounds which simulate sex, without actually requiring physical contact. Brilliant.

I’ve mentioned Sandra Bullock, someone I’m not normally a fan of, yet here I actually like her performance. Around her are some other great actors, including Bob Gunton, Denis Leary and Glenn Shadix, as well as early, blink-and-miss roles for Jack Black and Jesse ‘The Body’ Ventura. The best of the bunch, for me, though, is Nigel Hawthorne as San Angeles saviour Dr. Raymond Cocteau. Hawthorne is probably best known in the UK for playing Sir Humphrey Appleby in the satirical 1980’s comedies Yes, Minister and Yes, Prime Minister, but here he plays the most obvious villain in the world as the malicious mind behind Phoenix’s escape. He’s a very easy character to hate, and Hawthorne excels as the weaselly, devious guy.

Bratt and I don’t have much of a history together. I’ve never seen an episode of Law & Order, and the only other thing I actually know him from is the similarly-Bullock-costarring Miss Congeniality, which is fairly terrible for every reason that isn’t Michael Caine or Ernie Hudson. However, here I love Bratt’s character. He plays Huxley’s exceedingly straight-laced colleague, Alfredo Garcia, who is nothing short of a delight to behold. Yes he’s goofy to the extreme, but in such a ridiculous film it’s the only way is third-tier character could have made any impression.

Enhance your calm. Be well. Resonate some understanding. What seems to be your boggle? These are just a few of the many oh-so-quotable lines from this cheese-tastic script. That’s not to mention Spartan’s introduction of “Send a maniac to catch one,” or the Self Esteem Booth that tells a depressed guy “You are an incredibly sensitive man, who inspires joy-joy feelings in all those around.”

In case you haven’t picked up on it, I love this film because it’s so very, very stupid. Let’s take a look at the beginning, shall we? Spartan jumps from a helicopter, on a bungee rope, yet the rope doesn’t bounce, he just jumps off at the bottom. So already, this is a man with no need for such trivialities as physics. We’ve also got to accept that the Los Angeles justice system will happily take the word of Simon Phoenix, a convicted mass murdering maniac, over that of John Spartan, the police officer who brought him in, with regards to the hostages who died during Phoenix’s arrest. This results in Spartan being sent to prison for far longer than Phoenix. Of course. I’ve already mentioned the sex scene, the phone call and the upper class Taco Bell, but there’s also cars that encase you in foam upon a collision, an entire sect of people living in the sewers eating rat burgers and being led by Denis Leary, and there’s also the small matter of a pristine 1970 Oldsmobile 442 with a 455 cubic inch engine, radial tyres and bucket seats just sitting down there waiting to be driven out. It’s all insane, some of it cringe-inducingly so, not least Stallone’s final speech, but that’s what I love about it. Oh, and this is a world where toilet paper has been replaced by three seashells. Think about it.

And speaking of insanity, the final confrontation between Spartan and Phoenix is nothing short of spectacular. It takes place in the cryogenic prison, with Phoenix attempting to thaw out all the other inmates – including Jeffrey Dahmer – and ends with Spartan smashing a cryogenic capsule, and freezing the entire facility, including Phoenix, once again showing more than a passing disinterest in science. The best part? Whilst swinging on a giant crane, Spartan spins around and decapitates Phoenix’s recently frozen head from its body, and shattering it on the ground, with icy blood and brain shards splintering into hundreds of pieces, before the entire facility explodes, which of course Spartan narrowly escapes from. Love it.

Ah yes, Simon Phoenix. As with Benjamin Bratt, I’m not overly familiar with the work of Mr. Snipes, other than U.S. Marshalls (passable), The Fan (decent), King of New York (pretty good) and Passenger 57 (terrible). Of all those films, this has to be my favourite Snipes performance. He’s an unhinged, racist, delightfully un-PC nutjob who revels in the chaos he creates, and his fashion sense is a thing of beauty. Decked out in denim dungarees over a luminous orange vest, and with a strikingly blonde flat top haircut, he really does have to be seen to be believed.

Hopefully my love of this film has inspired you all to seek it out, regardless of whether you’ve watched it before. Ket me know how you get on. Was there anything I missed about how awesome this movie is?

14 thoughts on “Top 10… Reasons Why I Love Demolition Man”