So apparently all I’ve got time to write at the moment is my weekly top 10 lists. Sorry about that, I’ll get back onto the reviews in good time. I’m especially annoyed because this year I was planning on celebrating Hitchcoctober, which of course would have been dedicated to reviewing as many Hitchcock films as possible, but as I still haven’t moved yet and my girlfriend probably doesn’t want to be subjected to lots of old and/or scary films, that will have to wait until next year, I suppose. But I’ll be doing at least something a little topical with a few horror-themed Top 10s.

First up, spiders. Now, I’m not scared of spiders, I just fucking hate the little shits. The way they skitter about, can seemingly climb anything (other than bathtubs, suckers) and just have far too many legs than any living creature should. So many joints! If I could select one species to be wiped clean from the Earth, I’d pick spiders in a heartbeat. Actually, I’d pick daddy-longlegs (otherwise known as crane flies) because they’re just as horrifyingly hateful as spiders, except they can fly, and have seemingly no real purpose or knowledge of their surroundings. They just float around, this way and that, not giving two shits about where you are and how many rolled up socks you’re throwing at them. Fuck crane flies. Sorry, I got a little side-tracked there.

Spiders are evil, hateful demons from the dusty, unswept corners of Hell, who purposefully leave cobwebs across doors or alleyways, just for me to walk through and become semi-cocooned in. And I’m not the kind of guy to trap it under a glass and release it back into the wild. No, those spiders came into the house for a reason; they like it in here. And if you let them outside, they’re just gonna come straight back in again. Therefore, the only resort is arachnicide, preferably via flip-flop. There’s no need to be unnecessarily cruel here – I’m not the kid from Chronicle – I get it over with quickly, and hope that all the other spiders get the message. I think I’ve rambled on long enough now. Proof of just how horrible spiders are can be clearly seen in how often they appear in films as monsters. As such, here’s my top 10 movie spiders. Oh, and I’ve immediately disqualified Eight Legged Freaks and Arachnophobia, because there’s nothing but spiders in those films, and I can barely remember them.

There were a lot of options for the honourable mention, and unfortunately also a lot I haven’t seen. I’d love to include The Incredible Shrinking Man‘s spider battle scene, but I’ve not seen it, which is the same for Tarantula, Spiders and in fact any other film that features spiders as the primary nemesis. Instead, I had to choose between Megamind‘s Spee-ider, Tim Robbins setting his leg on fire in Nothing to Lose, or Spider-Man‘s origin bite. I opted for the bite, simply because it goes on to create an incredibly popular (though not overly with me) superhero.

10. Harry Potter and the Prisoner of Azkaban

In the interest of full disclosure, I had completely forgotten there were spiders in the Harry Potter universe. I know. It took my Potter-fanatic girlfriend to remind me of Aragog, Hagrid’s car-sizes behemoth in the woods from Chamber of Secrets (and Half-Blood Prince), but then I remember the boggart in Prisoner of Azkaban, who transforms into what you fear the most – which for Ron (Rupert Grint) just happens to be a spider bigger than he is. To counter a boggart attack, you cast a spell that alters the fear-inducing being into something quite ridiculous, such as, for example, a giant spider wearing eight rollerskates, which is more than a little hilarious, and I doubt I’d get tired of trying to watch it stand up for a long time. Imagine Bambi on the ice, but with four more legs and zero amounts of adorable.

The first entry that isn’t technically a spider (there’s three others, anticipation-fans), this hideous demon-baby doll/meccano hybrid is the unofficial leader of Sid’s ‘modified’ toys, and still gives me the creeps. It could be the single empty eye socket, or the blank, unflinching expression on the face, or maybe the fact that it’s on freaking spider legs! It’s an abomination unto man, not helped by that weird claw thing it loves flinging around and pointing with.

And sticking with the terrifying theme, the spiders from The Mist are just a tad more nightmare-inducing than from Toy Story. I love The Mist, and think it doesn’t get as much credit as it deserves, but then I’m a fan of both the small-number-of-people-dying-inventively and town-terrorised-by-beasties plot devices, and this brings the two firmly together in Frank Darabont’s under-budgeted sci-fi/horror/thriller. The spiders have entered through the same dimensional rift as the other creatures taking over this town, and despite being a tiny fraction of the size of some of those beings, these guys should not be underestimated. The size of a medium dog, they capture in their webs but don’t kill you, no, they Alien your body and lay a shit-ton of eggs in there, just waiting to hatch out and feed on your soon-to-be corpse. And if that’s not enough, the web-gunk they shoot cuts through pretty much everything – including you. Fortunately, they’re susceptible to bug spray, as long as it’s been ignited by a little old lady.

So what if they only have four legs? You can’t tell me that these little heat-seaking, eye-scanning, floor-skittering robots aren’t based entirely on spiders. The way they move, especially going under doorways, is nothing short of arachnid-like, they just get it down with a more economical number of appendages. These may well be my least favourite robots – and I love me some robots – purely because they have no lovable characteristics, they’re just mean, creepy little buggers.

It’s a tie! Well, there isn’t much that separates these two friendly talking spiders in their respective supporting roles, so I couldn’t choose between the two. Peach’s Miss Spider is voice by Susan Sarandon, whilst Bugs’ Rosie is Bonnie Hunt, a black widow widow. Neither gets an awful lot to do in the films, but I like them all the same.

I’m an unashamed Wild Wild West apologist. Yes, at times it’s racist and offensive to the disabled, and yes it does feature Kevin Kline in drag, which is something I never needed to see, but you also get M. Emmet Walsh and Selma Hayek, so that evens that out. Plus, Kline is great fun when he’s not in a dress, Will Smith and Kenneth Branagh are reliably entertaining, and did I mention the giant mechanical spider? Thought not. If you haven’t seen the film, it may come as something of a surprise to see this behemoth, and I can confirm that watching it first time around was something of a surprise too, but a welcome one at that. Who wouldn’t love to drive one of these to work? 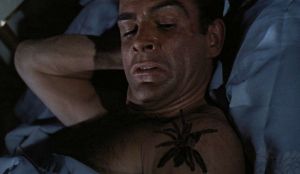 You’re lying in bed when you feel something on your side, and notice the covers twitching ever so slightly. What could it be? The hand of a lover? A teddy bear that’s come to life? Or a tarantula the size of a teaplate? Yep, option ‘c’. The spider in this scene – actually a non-venomous variety – is one of the few creatures to genuinely terrify Bond on screen. You can tell by the sweat pouring off his brow, and the way he waits until the creature ever so unbearably slowly inches its way off his shoulder, before leaping clear of the bed and beating the thing into the carpet. SIt may well have been Sean Connery who taught me how to flail wildly at bugs until they stop moving, but the soundtrack to my life never quite hits the strings the way it does when Bond does it. In the book, this was a centipede. That just seems wrong.

How do you know when it’s been too long since you last saw Goodfellas? Well, how about when you’ve been able to watch the entire run of The Sopranos, and hen you do an image search for the character of Spider and discover that he’s played by Michael Imperioli! It’s Christopher Moltisanti! I had no idea! Anyway, no he’s not an actual spider, that’s just his name, but damn if I’d be remiss to exclude him from this list, as although he’s barely in the film, the scene he’s in is one of the greatest in the entire film with Joe Pesci’s Tommy shooting him in the foot for taking too long getting his drink. The next scene, Spider’s back and hobbling, and when Tommy starts making fun, Spider tells him to go fuck himself, quite rightly really. Well. it doesn’t end too well for Spider. He should have known better than to bust the balls of a psychopath like Tommy. 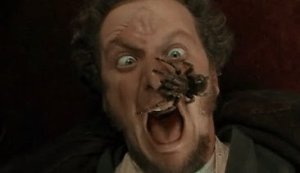 Oh how I love Home Alone, and it’s oft-neglected sequel. Harry (Joe Pesci again) and Marv (Daniel Stern) play a couple of low life thieves out to burglarise some empty houses during the Christmas holidays, but they find one house particularly difficult to rob, as Macauley Culkin’s Kevin McCallister has been unintentionally abandoned by his vacationing family. Early on in the film, Kevin accidentally frees his older brother Buzz’s tarantula (named Axl, apparently). At the time you think nothing of it, and indeed it’s barely even noticed by the kid, however, in a tight spot later in the film, Axl comes in very handy when Kevin picks the thing up – disgusting, I know – and drops it on Marv’s face. Cue my favourite screen scream, ever, as Stern bellows the house down, before throwing the spider onto Harry, and then subsequently beating his partner with a crowbar. Love it.

1. Lord of the Rings: The Return of the King

Sometimes a spider can be too big for its own good. Shelob, the monstrous creature almost as old as Middle Earth itself, is such a being. Tolkien described her as being grossly fat – she eats anything and everything – but her sheer scale almost prevents her from doing much damage as well, especially in the fairly close quarters in which she and Samwise Gamgee (Sean Astin) have their tussle. Compared to Sam, Shelob is roughly the size of a tank, but her weapons – the snapping chelicerae of her mouth and the poisonous barb on her underbelly – are unwieldy to use on a mobile prey. Still, she’s a formidable foe for her age, and did I mention she’s terrifying? If she found you in your sleep, or caught you unawares, you’d be done for. No question.