Some films seem to be created purely for people who don’t just like watching films, but who love every aspect of cinema itself. Cinema Paradiso is such a film, and I am such a person, so be sure to take this review with a hefty pinch of salt (preferably sprinkled over some freshly made popcorn), especially if you are not as cinematically inclined as myself. You see, Cinema Paradiso is more than its plot – the story of a young boy in war torn Italy and his frequent visits to his local cinema – it is a love letter to the very medium of film, made by people who love film, and tapping into what the hallowed flickering image can mean to so many people. 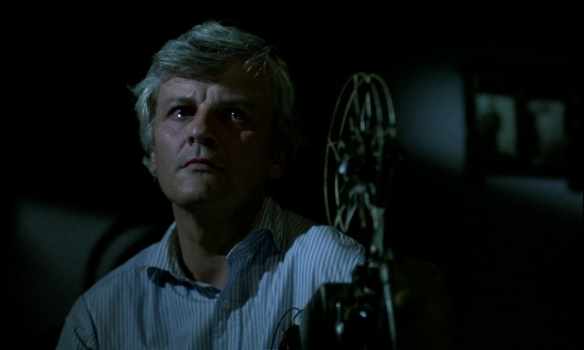 Here, the cinema is not just a place within which films can be seen, but also so much more. It is the centre of the community, where you and your neighbours laugh together at both the prat-falling of Charlie Chaplin and the snoring of a fellow patron. It’s where you learn of the ways of the world, perhaps catching your first glimpse of the temptations of the naked form. It’s where you can find that special someone, who shares an ability to not be scared by a horror movie, your eyes meeting across a sea of otherwise cowering faces. And who is behind these milestones of existence? What hero bravely forgoes his own life, sweating away night after night in a tiny room so that others may while away the hours and catch the latest John Wayne epic? Why, who else but the humble projectionist? The rollerof reels, turner of cranks, focuser of lens and guardian of all that is good and cinematic.

Now if that all sounds a little nostalgic and idealistic, well then welcome to the rose-tinted mindset of Cinema Paradiso. This is a world that longs for times gone by; reminiscing on an age before summer blockbusters, yet it also admits without a cinema, life still goes on, and this sense of idealism is only felt by a blessed few, whilst others simply cannot understand, despite the joy it brings.

The story follows the life of Salvatore, or Toto to his friends, who is played by the devilishly cheeky Salvatore Cascio as a child, the mopey Marco Leonardi as a teenager, and the reminiscent Jacques Perrin as an adult, looking back on his youth spent at his local cinema, the Paradiso. It’s the very definition of an episodic story, with clear breaks between the chapters of his life as he begins an apprenticeship – and friendship – with the projectionist Alfredo (a magnificent Philippe Noiret), before a tragedy causes Toto to take over from his teacher. He discovers the opposite sex in the form of the beautiful Elena (Agnese Nano), before eventually being persuaded to fulfill his destiny in life. Toto’s mother (Antonella Attili) is very much against his devotion to the cinema (something I can relate to, though I never received the public beatings), but she warms once Alfredo starts becoming an almost surrogate father to Tito, whose own Dad never returned from the war in Russia. All in all, the plot isn’t much that you haven’t seen before, but it’s more the tone and spirit of the film that really drew me to it.

Generally speaking it takes a great deal for a film to draw a deeply emotional response from me. In recent memory there are only a few instances where I’ve genuinely welled up – End of Watch and The Perks of Being a Wallflower spring to mind, and the latter of those is for very personal reasons – but I’m not ashamed to admit that by the end of this film the room was starting to get a little dusty, and only became more so as the film went on. However, it wasn’t the infamous final montage that got me; it was a scene earlier that had me reaching for the tissues. It’s shameless heartstring tugging, especially for cinephiles, but I was completely taken with it.

It’s not just Tito’s life that plays out on the screen, but the life of cinema itself. We see the emergence of smuttier, more adult pictures, much to the church’s chagrin, as well as the rise of franchise cinemas, outdoor screenings and the like. There’s also some truly evocative imagery on offer, with the epitome for me being the movies being projected from a great stone lion’s head on the wall, or out the window to be viewed by the masses once the cinema has closed for the night.

However, if you’re planning on watching this film – and if you haven’t before, I highly recommend that you do so now – then I cannot emphasise enough that you should stick to the 2-hour International cut, as the much longer director’s cut adds an overarching sinister, Machiavellian structure that completely alters most of the plot, and marrs the way you feel about otherwise adorable characters. The shorter cut, however, is nothing short of pure joy, especially if you love films, which you should.