This post was originally written for French Toast Sunday as part of my Road Trip series.

Sam ‘Ace’ Rothstein (Robert De Niro) was handed it all on a silver platter. Put in charge of a new casino on the Las Vegas strip and living the life of luxury with his smokin’ girlfriend Ginger (Sharon Stone), Ace was at the top of his game. Alas, when his old friend from back home Nicky Santoro (Joe Pesci) shows up, Ace’s life becomes a little more complicated.

When discussing Casino, there’s a very clear comparison to be made with Martin Scorsese’s other rise-and-fall 90s epic, Goodfellas, made just five years previously, and it’s a comparison from which Casino doesn’t come away well. There are many similarities between the two, even just looking at the plots, with the glamorous lifestyles obtained by less-than-legal means, a lead character eventually in over his head and an undoing revolving around narcotics and Pesci’s bursts of anger and violence. There are of course many other similarities too, which is only to be expected seeing as they’re from the same director, writer (Nicolas Pileggi), and many of the same cast and crew, but for the most part this unfortunately feels like everyone is retreading old ground, and to a lesser quality.

That’s not to say this is a bad film – Scorsese on a poor day is still far better than most directors could hope for – it’s just a little disappointing. Maybe I’ve seen Goodfellas too many times to make an accurate comparison, or maybe it’s the very presence of this comparison that reflects so negatively upon Casino. That seems to be the curse of Scorsese, for whatever he makes, it will undoubtedly always be referred back to his gangster masterpiece, especially ones that so closely follow the same structure. If the director didn’t want a comparative criticism, he shouldn’t have made such a similar film.

I would consider one of Casino‘s major flaws to be its narration. This is a heavily narrated film, with voiceovers provided by at least three members of the cast, which unfortunately gives the feeling that almost the entire film is exposition that must be delivered vocally, rather than shown on screen. This provides a step-by-step documentary-like feel, which really starts to drag after 20 minutes or so. I don’t mind a narrated set-up, or for some important moments peppered throughout, but when more than half – and in this case it seemed like significantly more than half – of the film is narrated, well then in my book you’ve got problems. It’s often very monotonous too, so that drastic life-changing events are skimmed over with no sense of importance. It’s like someone recounting a story they’ve told many times before – which, in effect, is what’s happening – so they don’t really know anymore which elements to emphasise. 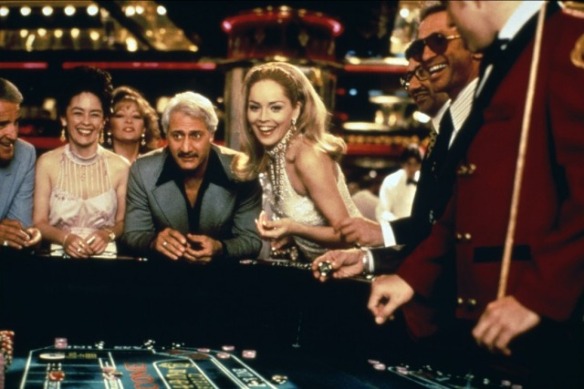 Fortunately, some of the dialogue used in the narration is excellent. Pesci’s Nicky glibly informs us there’s “A lot of holes in the desert, and a lot of problems are buried in those holes,” which tells you just about all you need to know with regards to what happens if you piss the wrong people off in Vegas. Unfortunately I felt this promise wasn’t played with enough, as the actual act of hole-filling was seldom used, even throughout the many masterfully created montage sequences. Elsewhere, Ace describing proposing to Ginger as “I decided to complicate my life” provides so much insight into that relationship – he knew she’d be trouble, but wanted her anyway.

As you might expect from a Scorsese epic, this is a long-ass film, clocking in at two minutes shy of 3 hours, however I don’t think there’s enough story to fill that amount of time, especially considering the narration and the montages, each of which do their job of conveying information and the passing of time. The montages are well crafted and help pick up the pace of an otherwise occasionally languid film, but sometimes they only show brief snippets of what could have otherwise been entertaining scenes. Nicky’s gang and their jewelry heists, for example, could have used more than one short montage.

Supporting casts are regular movie highlights for me, but here I was left disappointed with how little some of the key members were used, especially considering how often some of them were actually on screen. Don Rickles, first introduced to me as Mr. Potato Head, is present as Ace’s right hand man for a large percentage of the film, but rarely gets to do anything other than look like a boulder. Similarly, Kevin Pollak as Philip Green, the squeaky-clean cover for the underhand tactics, is often present but so very rarely gets the chance to be the captivating, genuinely hilarious presence he so often is. Amongst the support only James Woods, as Ginger’s former lover and pimp Lester Diamond, really gets the chance to shine (pun intended). Woods is always interesting on screen, and here he is at his oiliest. He’s a scumbag of a guy, one who knows his power over the infatuated Ginger, and will stop at nothing to exploit her for everything he can get, and Woods is perfect in the role.

Of the lead trio – De Niro, Stone and Pesci – Stone is possibly the most impressive, but only because I’ve never seen her attempt a performance like this before, and I cannot disagree with the Supporting Actress Oscar nomination she received. I am surprised Pesci wasn’t similarly nominated for Supporting Actor – apparently he wasn’t as good as James Cromwell in Babe – because Pesci is possibly the most entertaining element of the film. Whenever he appeared on screen the action picked up again, but you had no idea what could happen. Many scenes revolve around a torrent of f-bombs from him to someone else – usually Ace – or beating someone up. He’s a loose cannon, unafraid to stab someone to death with a pen for insulting his friend, or stick a guy’s head in a vice to extort information. It’s brutal, often gory and at times very unpleasant to witness, but it is always engaging and glorious to behold.

Alas, the same cannot be said for De Niro’s Ace. De Niro doesn’t pull off a bad performance, he’s just been lumbered with a character who doesn’t show a great deal of emotion, and who doesn’t have much of an arc in terms of character. He ends the film in a similar fashion to how it begins, and the only change overall is a certain level of pride and smugness, but not much. Sometimes the lead character of a film needs to be that – spending three hours with Pesci’s Nicky would be exhausting – but with Ace there just wasn’t enough to keep me engaged. And I know I said I wouldn’t keep comparing it back to Goodfellas, but there Ray Liotta’s Henry Hill had a considerable arc, scenes with genuine emotion and times when his face wasn’t showing the same expression as throughout the rest of the film. This cannot be said of Casino. I wouldn’t go as far as to say De Niro is coasting here, more that he was practicing for the acting slump he’d fall into a few years later.

I’m re-reading this and realising this is coming off as a particularly negative review, and that is by no means my intention. There’s a lot of value here – the way Ace keeps the billionaire “whales” gambling their winnings away, ensuring the casino always comes out profitable, the relationship Nicky has with his wife (Melissa Prophet), slapping her one minute then kissing her the next, Ace’s borderline obsessive nitpicking throughout the casino he runs, ensuring all muffins contain exactly the same number of blueberries. The soundtrack is also wonderful, full of classics and covers of Rolling Stones hits, and the fashion is delightfully eccentric too. I’ve now found the inspiration for Elliot Gould’s wardrobe in the Ocean’s trilogy.

Overall, I’m sure that within Casino there is an excellent film, it just needs another run past the editor, or maybe a couple more polishes of the script. Scorsese is capable of better, and I don’t think it’s a bad thing to request it of him. That being said, this is a very good film, and I do not blame anyone who enjoys this as much as I know some people do.