Marty McFly (Michael J. Fox), a young slacker who dreams of rock and roll stardom but lacks the courage to showcase his talents, finds himself in something of a unique situation when, during a late night experiment with his friend Dr. Emmet ‘Doc’ Brown (Christopher Lloyd), Marty is transported back in time 30 years to 1955. His only way back is to contact the 1955 Doc Brown to help fix the time machine, but in doing so he must also ensure that his own parents (Lea Thompson and Crispin Glover) – now the same age as Marty – get together, which is made all the more complicated by the fact that his own mother has taken a shine to him. 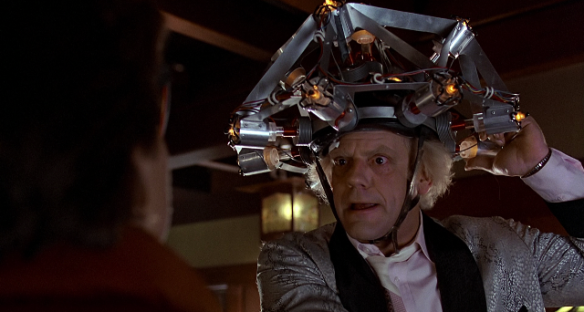 Is there such a thing as a perfect film? For all the praise I laud over Jurassic Park, I’m more than willing to admit that as a movie it has it’s shortcomings – just look at the cliffside, which miraculously appears where mere moments ago there had been a goat in a cage. Back to the Future, however, may be the closest thing I’ve found to an utterly flawless movie. It’s very rare that I’m unable to find a single problem with a film, yet here I’m stumped. Other than a couple of scenes that are intentionally – and comically – uncomfortable to watch, this is a film resplendent with great characters, wonderful performances, a simple yet engaging plot and so many other brilliant aspects. 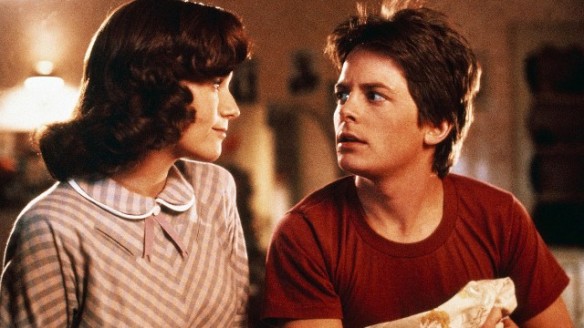 Back to the Future part 2, however, is a little less perfect. Released 4 years later in 1989, it took the traditional sequel route of being significantly darker than its predecessor. The plot sees Marty, having successfully made his way back to 1985 and seeing the 1985 Doc heading off to the distant future of 2015, being immediately collected and taken to the future, along with his girlfriend Jennifer (Elisabeth Shue, replacing part 1‘s Claudia Wells), by a Doc who has been in the future for some time, and seen the terrible things that will one day occur to their children (also played by Michael J. Fox). As stories go it’s far more confused and messy than the first time around, and in fact the whole matter with the children is resolved very early on, with the attention then heading to a second plot involving a sports almanac that Marty planned to take back to 1985 with him in order to win a lot of money back in the present. Inevitably the almanac gets into the wrong hands – Thomas F. Wilson’s perennial antagonist Biff – which causes Doc and Marty to have to go back to the past to sort this all out. 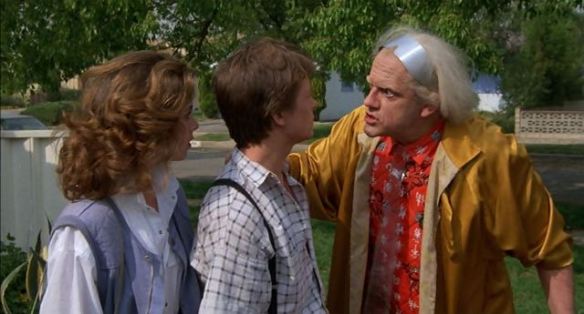 Were the entire film set in the future of 2015, I posit that this would not be a good film, however, after a brief spell in an alternate 1985 where Biff has taken over everything, once the action gets back to 1955 – coincidentally on the very same day they were back in 1955 in part 1 – the film undoes anything lesser it may have achieved in the first couple of acts. As soon as film 2 begins interacting with film 1, well that’s gold right there. From Doc having a conversation with himself to Marty chasing young Biff around to get the almanac back, this entire thrid act is almost as good as part 1. It also features one hell of a setup for part 3, just as part 1 did for part 2. 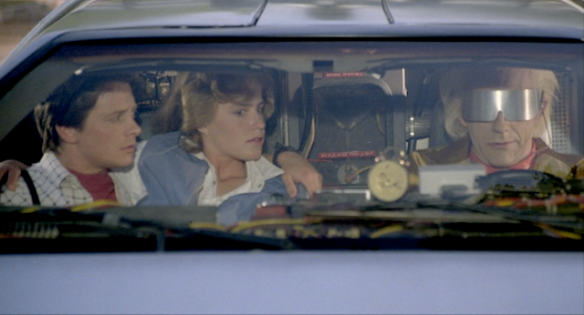 Part 3 takes a leaf from part 1’s books by picking a time period in the past and setting almost everything there, bar a couple of bookends. However, instead of 1955 this time Marty must go back to the old west of 1885 to save Doc, who is stranded there and due to die in a few days. Marty, with the help of 1955’s Doc, goes back to help out, but finds himself stranded too when he neglects to fill the time machine with petrol first. The two must now work out why Doc is going to die, how to avoid it, and how to get the time machine to a fast enough speed to get them back to 1985. Also, Doc gets the chance to fall in love with series newcomer Mary Steenburgen.

Technically, the first time I saw this film I’d never seen a western before, so many of the references were new to me. Now, however, I’ve seen quite a few, and as such I enjoyed it a great deal more this second time around. It’s got everything you could possibly want in a western – gunfights, saloon brawls, a train chase and more than a fistful of homages to Clint Eastwood. It’s fun whilst still being gripping, and it’s a touching send-off to the characters we’ve grown to love over three films. 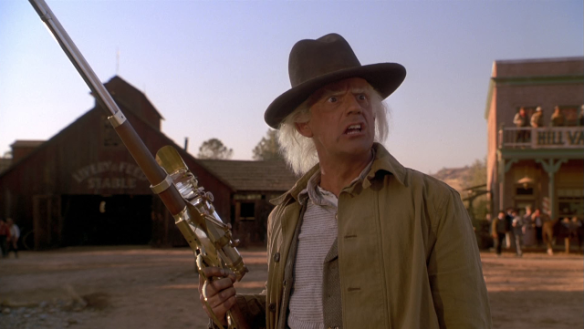 That all being said, this is a time travel movie, and as such it’s rife with plot holes and paradoxes that I can’t help myself in pointing them out, because that’s the aspect of time travel I love most. Needless to say, from this point on there will be spoilers. Some films, like Looper and Primer, set up rules within their universe and, as far as I can remember having only watched them once, stick to them. Others set up rules then opt to ignore them whenever they become inconvenient. The biggest offender of that here is in part 2, when old Biff in 2015 steals the almanac and the time machine and goes back to 1955 to give them to young Biff. He is then miraculously able to travel back to the same 2015 he left and leaves the time machine in the exact same place he left it, for Marty and Doc. As soon as old Biff left that 2015 he should have been unable to return to it, because of the changes he made in 1955. This is proven when Marty and Doc return from 2015 to 1985, only to find their home in ruins after Biff took over. The 2015 they left cannot have come from this alternate 1985, because literally nothing changed whilst they were there. In fact, Doc even explains this to Marty, by saying that if they traveled back to 2015 to stop old Biff from taking the almanac, they’d end up going to the alternate 2015 that the alternate 1985 they are in would become. The only way they could have gotten around this would have been for Marty and Doc to find the time machine missing in 2015, forcing them to build a new one – out of a Police Public Call Box, for example – to travel back home. 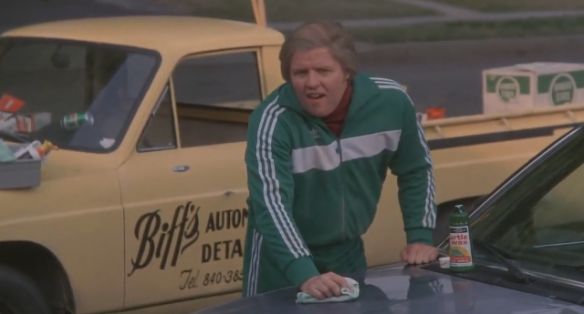 Also, and this is a much less frustrating point, if only because there isn’t someone in the film directly explaining why it can’t happen, when, at the end of part 1, Marty returns to his present in 1985 and discovers his family are now happy and successful, and his mother has no problems with him going out with Jennifer. However, it’s my theory that in this 1985 there must already be another Marty. Presumably in this alternate timeline the McFlys still had three children, and at the same time in their lives – they recognise and talk to Marty, so that’s proven. However, in their more successful and better-parenting selves, is it still likely that Marty would still be friends with Doc, and still have gone back in time with him? We know this must have happened, because Marty comes back to see himself go back to 1955, but I don’t think that would have happened if Marty was the more popular kid he ineveitably would have become with cooler, richer parents and siblings. It’s a nature vs nurture argument, and is much weaker than my Biff anomaly, but it bugs me nonetheless. 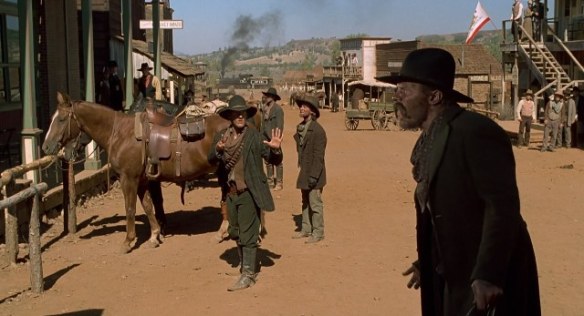 It only goes to show how strong these films are that they work in spite of these issues. Granted, 30 years ago when the first film came out, and even five years later when part 3 was released, the plot-hole-picking culture was much less evident than it is today – thanks Internet! – so far fewer people would have been fine-tooth-combing the film as I have been. Either way, the evidence of holes in the logic take absolutely nothing away from the wonderful characters in these films. Doc and Marty have become pop culture icons, their quotes have entered into the lexicon (“One point twenty-one Jigawatts!”, “This is heavy,” etc.) and the performances behind them are nothing short of perfection. The same can be said for Lea Thompson (wonderfully cringe-inducing when she makes the moves onto her own son, or looks lustily at him in a mirror), Thomas F. Wilson (the most chameleonic actor here, really losing himself into every variation of his character and their relatives) and, my personal favourite, Crispin Glover as George McFly, owner of the best laugh in movie history.

If you want to hear some more thoughts on this trilogy, be sure to listen to the latest Lambcast episode, upon which it was discussed by myself, Todd Liebenow, Justin Gott, Jess Manzo and Nick Rehak. You can listen to the show here.

10 thoughts on “The Back to the Future Trilogy”