When I was a child, I remember wanting to be a journalist when I grew up. I liked writing, and was good at English at school, so it seemed the right thing to do would be continuing said activity into my adulthood. At the time this presented precious few options, with journalist or novelist being the most obvious and apparent to my juvenile outlook on life, and I’ve never been a terribly creative person, so the concept of coming up with fictional works was beyond me. It was settled then; I would be a journalist. I even undertook my obligatory two weeks work experience in Year 10 at the Southern Daily Echo, a local newspaper, where I actually wrote a couple or articles that were published under the editor’s name, and probably weren’t very good anyway. Needless to say, my journalism dream never quite solidified, as is the case with most childhood plans, and to be honest I’m not all that bothered, as judging by His Girl Friday I’d never be able to survive in such a world. 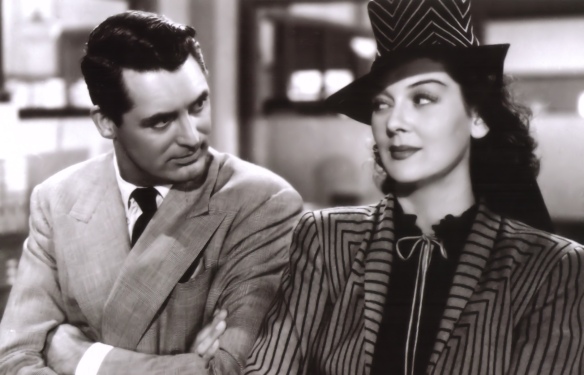 Rosalind Russell plays Hildy Johnson, the best reporter for a newspaper run by Walter Burns (Cary Grant). Unfortunately for Walter, Hildy – who is also Walter’s ex-wife – has left the newspaper and plans to move to Albany with her new husband-to-be, Bruce (Ralph Bellamy), the very next day. Bruce is a bit of a bumbler, and Walter sees him as something of an easy target, so Walter sets about sabotaging their plans by getting Hildy and her ridiculous hat to stay in town to cover a story only she is good enough to write.

The reason this film, directed by Howard Hawks and released in 1940, appeared amongst my most anticipated movies list is because recently I’ve realised I’m something of a Cary Grant fan, despite having seen criminally few of his performances. Other than this, I’ve loved him in North by Northwest and The Philadelphia Story, and that’s it! For someone whose screen presence and manner of speaking are things I admire so much, I sure have seen far too few of his films, hence why Notorious and Bringing Up Baby are also on the list to watch this year. I may try to get around to watching To Catch A Thief and Suspicion during my HitchcOctober marathon too, and An Affair To Remember is sitting on my DVD shelf, staring at me. Well, at least now I can add another film to the Love-Cary-Grant pile as he, along with Russell, who is possibly on screen more than Grant, is excellent in this film. He takes a character who is at times utterly despicable – he is, after all, attempting to break up an engagement and ruin the plans of someone he cares about, purely for his own gain – but makes him enjoyable to be around, purely through the powers of wit and charm. 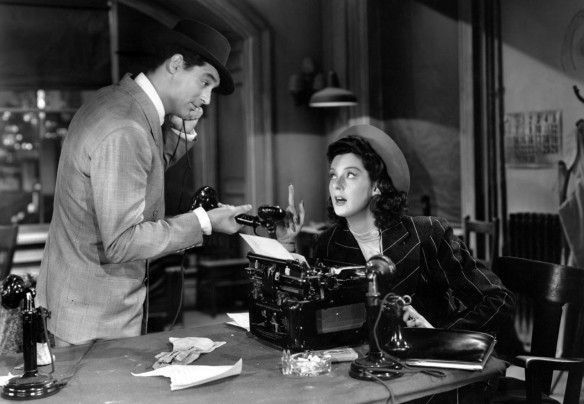 It’s very easy to spot a film that was originally performed on stage (including a “Based on the play by BLANK” credit often helps). If it takes place in relatively few locations, has a limited cast and is almost entirely driven by the performances and dialogue across relatively long scenes, well then you’ve got yourself an adaptation. Think 12 Angry Men or Glengarry Glen Ross. His Girl Friday, adapted from The Front Page by Ben Hecht and Charles MacArthur, is very clearly such a piece, with fewer than 10 locations – probably closer to 5 – a small predominant cast and a constant rat-a-tat dialogue pace that simply never lets up. Actually, that’s not true. There’s a couple of times when the machine gun back and forth of multiple characters all talking at once stops dead, leaving a silence even louder in its wake. The most memorable example comes when a scoop of journalists is thoroughly reprimanded for misreporting on a girl’s involvement with a recently convicted murderer heading for an execution. The sudden and utter absence of all noise is shocking, and powerful. 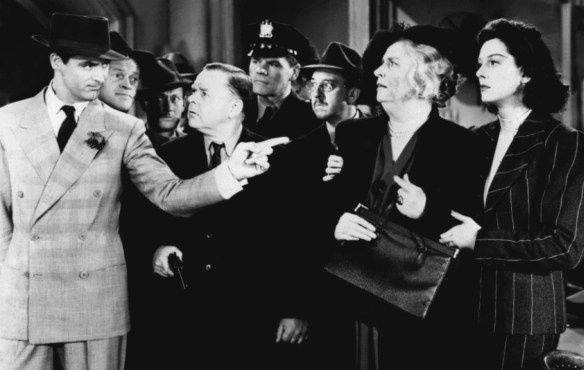 I’ve long been a fan of The Hudsucker Proxy, and I’d often wondered from where Jennifer Jason Leigh had taken the inspiration for her character Amy Archer’s rapidfire manner of speaking. Well, it turns out that was Rosalind Russell in this film, because a lot of parallels can be drawn between the two. I was surprised that I’d never seen Russell in a film before, but looking through her career there really aren’t many films I’ve even heard of, which surprised me as well, mainly due to how great she is as Hildy. It’s worth noting that the original story had Hildy as a man, and the entire romantic relationship was dreamt up in the adaptation (I’ve not seen any other The Front Page adaptations either, though I look forward to catching the Billy Wilder/Jack Lemmon/Walter Matthau one at some point), so Russell was not only playing an existing character, but making her into something entirely new as well. She’s a strong, confident woman who can more than hold her own against the men in her field – and she even rugby tackles a guy at one point! Granted, by the ending she had almost let herself be controlled by at least one of the men around her, but I like to think that about ten minutes later (or 3.5 seconds, going by the speed of the dialogue) she’d have been right back to questioning the decision that had just been made and arguing with everyone involved.

Screwball comedies are a subgenre I desperately need to watch more of, because the comedy here is wonderful, and almost entirely buried in the dialogue. It predominantly comes from the sparky interaction between Grant and Russell – she describes him as charming because “He comes by it naturally; his grandfather’s a snake.” And at one point, Grant’s Walter describes Hildy’s new fiancée Bruce as looking like Ralph Bellamy, which is hardly surprising seeing as he’s the actor playing him. This kind of meta wink-wink humour works wonders as an off the cuff comment, and it makes the Julia Roberts pretending to be Julia Roberts in Ocean’s Twelve come off even worse, because of how much was made of it during that film. Elsewhere, we’re given insight into just how intelligent all these characters must be when a common man – Billy Gilbert’s Joe Pettibone – gets caught up in the proceedings and finds himself completely lost within seconds.

This was about as much fun to watch as I’d expected – which was a lot by the way – and when you consider there’s some very dark comedy – the press gang want the condemned man to be hanged earlier so they can make the evening edition – that’s quite an achievement. Needless to say, I’m looking forward to Bringing Up Baby quite a bit more now, especially with the re-teaming of Grant and Hawks.

13 thoughts on “His Girl Friday”