At a prestigious awards ceremony, Eve Harrington (Anne Baxter) is being presented with their highest honour for their Best Actress in a stage production. However, judging by the looks she is receiving from the guests at the event, a lot of people don’t seem to be in a celebratory mood about this turn of events. Via flashback we are transported less than a year back in time, when Eve – then nothing more than a down-on-her-luck theatre fan – met Karen (Celeste Holm), the wife of writer Lloyd Richards (Hugh Marlowe) and friend to Eve’s acting idol, Margo Channing (Bette Davis).

All About Eve is a film built upon acting performances and a biting look at the cut-throat world of the acting industry, wherein there’s always someone younger and prettier coming around the corner. Bette Davis – in the first film of hers I’ve ever seen – is phenomenal as Margo, the acclaimed actress surrounded by her entourage of adoring fans and friends. However, once Baxter’s Eve fawns her way into Margo’s affections, Margo finds her world crumbling around her as Eve sets about trying to steal her friends, her lover (Gary Merrill as Bill Simpson, the director of Margo’s play) and her very career. Davis is complimented with a collection of similarly impressive acting performances from Margot Ritter – as Margo’s long serving, mind-speaking assistant Birdie – Celeste Holm and a brief but memorable turn from Marilyn Monroe as another potential rival to Margo. 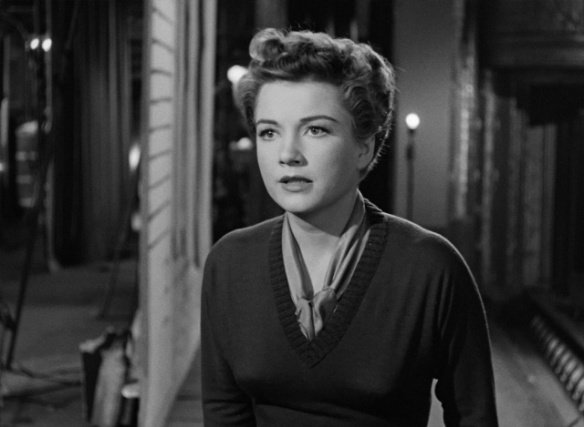 Unfortunately Baxter is something of a weak link here, mainly because as a character Eve is built up to be a tremendous, revelatory actress, but we never get to see her perform on stage. You could argue every aspect of her that we see is something of a performance, but it isn’t terribly layered, and when the occasion arises for her to drop the nice-girl act it’s a very binary switch, with not enough middle ground to make her a believable person. It’s not exactly a bad performance, it just isn’t good enough for what was expected here.It probably sounds like I’m giving away some spoilers here, but truthfully I’m not really, at least, not exactly. You see, as I mentioned the film begins with Eve accepting the award, and everyone – Margo, Lloyd, Bill, Karen etc. – looking disdainfully at her, as though she had wronged them all in some way. Therefore, as soon as Eve meets Margo and worms her way into her inner circle, it’s clear from the off that Eve is up to something, and is just using Margo as a stepping stone on her way to success. The only thing left to find out is how exactly Eve climbs that ladder, and the path taken deviates very little from the relatively direct route I assumed in my mind. Predictability isn’t the biggest flaw in the world – especially in a film 64 years old which has been paid homage to on many occasions – but it’s something I had an issue with. 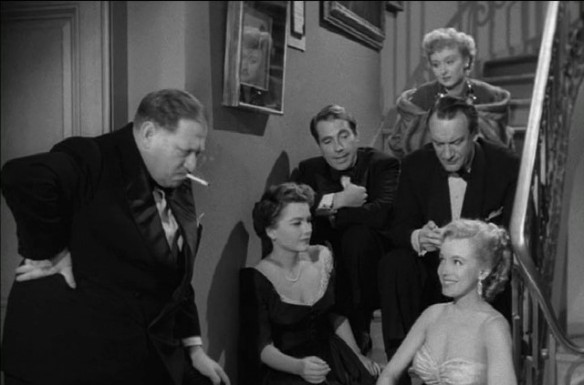 Fortunately there was enough greatness to overcome this and Baxter’s performance. Amongst the males in the cast, I loved the character of Addison DeWitt, the movie critic for whom George Sanders (it’s Shere Khan!) won a Best Supporting Actor Oscar. He sees himself as much a part of the theatre company as the actors, directors and writers, yet also relishes the opportunity to sit on high, detached from everyone else and pouring scorn down upon them. He has some of the best lines, and I’d like to see a sequel of his further or previous adventures.

The film is just as prevalent today as back in 1950, especially with regards to its depiction of celebrity culture. Eve wants to be just like Margo, but in what way? Does she desire the fame and notoriety, or is it truly her skill as an actress that she craves? To what lengths is Eve willing to go to achieve such greatness, and will it be worthwhile in the end? There’s a lot to say about age here as well. Margo is playing a 24-year old character in her play, despite being 3 months past her 40th birthday (I’d have guessed a few years older, personally, as that scowl adds about a decade), so when Eve, who just so happens to be 24 herself, steps up it seems only natural for her to assume the role. Due to who we’ve been following up to this point – Margo’s bitter nature has softened and become more sympathetic, whilst Eve has developed from innocent to sinister – it is seen as a knock against Margo, but in truth wouldn’t it make more sense for an actor to play a part they look most appropriate for? I remember a sketch from a British comedy show a few years ago in which Lenny Henry – a then-50 year old 6 foot 3” comedian – auditioned for the role of Annie. It takes the concept to an extreme, but it makes sense for Eve to play the part, yet it’s still seen as a slight against Margo. In fact, even in the opening ceremony of the film there is an older actor presenting Eve with the award, but his speech is drowned out by Addison’s voiceover, stating that we “Don’t need to hear what he is saying.” Is he implying that this lack of importance stems from him not being central to the plot of the film, or in fact is it due to him being old, and therefore no longer of value to a critic?

The ending would have been perfect had the story spanned a few more years – as it is it feels like we’re being nudged in the ribs by someone going “See, see! Look! It happened to her, too!” but again, there’s enough quality on display to make this thoroughly enjoyable, with an impressive cast mostly at the top of their game, a script that’s equal parts witty and thought-provoking, and a story that it doesn’t matter how often it’s told, it’ll always be fascinating.

9 thoughts on “All About Eve”