Where do I begin with 2001: A Space Odyssey? It’s a film I’ve kind of seen once before, in the background whilst I worked on other things. I’d gleamed a few details from certain scenes, but for the most part I remembered very little, with various podcasts I’d listened to seemingly describing a film I’d clearly not paid anywhere near enough attention to. Thus, I championed it to be the latest Movie of the Month on the Lambcast. It won, I hosted the show (here’s a link to it) and, despite that relatively in depth conversation with Robert, Jess and Nick – all of whom have more experience with this film than I – I’m still a little lost as to how I feel about the film. 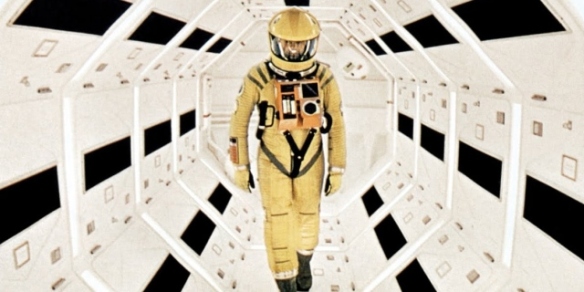 As I’m not entirely sure where to begin, I’m going to sit down calmly, take a stress pill and think about things. I think I’ll start by discussing everything I liked about the film, and as I seem to be one of the last people to be getting to this film, I’ll probably be discussing a few scenes that may be considered spoilers.

Firstly, I know beyond a shadow of a doubt that I loved how 2001 was made. Bearing in mind this was released in 1968, it’s phenomenal just what was achieved in an entirely pre-computer-generated era. I can’t even imagine how impressive this all must have been to see back in the 60s, let alone today. I was wildly impressed with the ingenious rotating corridor scene in Inception, but now I’ve discovered it’s a technique that dates back over forty years before that film was released, as there are several similar shots here. One of the most iconic of these is in the film’s second segment, set partially aboard a passenger space craft taking Dr. Heywood Floyd (William Sylvester) to the moon. He has fallen asleep aboard his flight, but the air (space?) hostess is awake and walking around the ship. She takes the in-flight meals to the pilots by walking around the cylindrical wall of the ship. Clearly the only plausible way of shooting this is by rotating the set around her, with the camera locked to the set, but the visual is astounding nonetheless, and I’m particularly taken by the imagination required to deduce that in such an environment we wouldn’t need a set of stairs when a curved wall would suffice. I’m still not entirely sure how they got the pen to float either (I’m very much looking forward to digging into some of the special features on my Blu-Ray). The rotating set is used again on a much more impressive scale later in the third segment, when an entire giant ship is one huge rotating set, around which one actor runs hamster-wheel-style, whilst another actor can be seen rotating past him (evidently strapped to the set) eating his dinner. It’s just amazing, and I’d have loved to have worked on this film, specifically in the visual effects, some of which look straight out of an M. C. Escher piece. 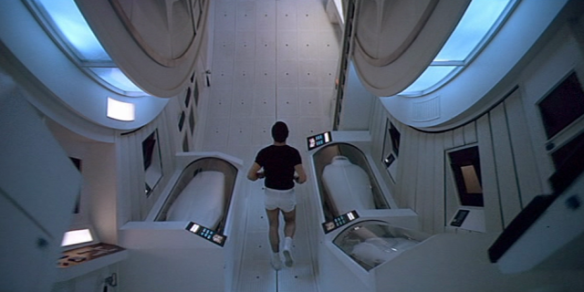 Having done a little research, easily my favourite effect is when one of the aforementioned astronauts, Dave Bowman (Keir Dullea) is forced to break into a spaceship late in the film, by way of explosive bolts propelling him at an alarming speed through a vacuum and back again as the doors shut. It’s a very quick sequence that was made by dropping the actor vertically down a shaft that was shot as though it was a long, horizontal chamber. However, to simulate Dave being pulled back again, it turns out they tied Dullea to a rope, on the other end of which was a stuntman who, once Dullea had fallen a certain distance, jumped off a platform the other side of the shot, causing Dullea to be pulled back up again. Think of it like a block and tackle, or counterweights in an elevator, except far more dangerous and ridiculous – couldn’t they at least have used a bag of cement instead of a stunt man? This could have gone wrong in so many ways, but it’s an aspect of film-making I miss in today’s overly-polished, pixel-perfect productions.

Speaking of how good the film looks, I love the designs of all the ships. There are several throughout the film, and they all have very distinct designs, all of which I believe were created with intricate, immaculate miniatures. The future-technology is also very well implemented, from the iPads to the Grip shoes, and the single greatest piece of written text comedy in film, the sign for the Zero Gravity Toilet (passengers are advised to read instructions before use). Something the film does very well is imbue character onto inanimate objects. Obviously the greatest example of this is with the computer on the spaceship in the third segment, HAL 9000, as voiced by Douglas Rain. 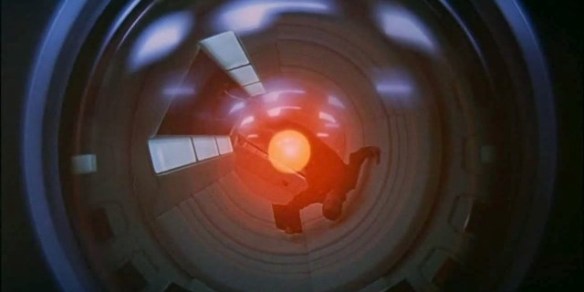 HAL is easily one of the most famous robots from cinema, despite the fact that he’s, for the most part, just a dull red light. He doesn’t even flash. There’s no physical embodiment trundling around the spaceship. He’s just there. Always watching, always judging, lying in wait to make his move. Because, you see, HAL is evil. Eeeeeeeeeevil. You wouldn’t think a dull red light with a monotonous voice could be quite so sinister but, well, you’d be wrong. The most terrifying moment for me comes after Dave suspects HAL of being faulty, so Dave’s fellow astronaut Frank (Gary Lockwood) undertakes a mission to reinstall a component that will prove this hypothesis. This mission requires Frank to head outside of the main living quarters and down the ship’s long “tail,” during which he needs to float from his little pod to the section that requires maintenance. We see Frank drifting, then we cut to his pod which, under HAL’s control, slowly turns around and raises its claw-arms, before making its way slowly towards the unsuspecting astronaut. Cut to Dave seeing Frank doing a Sandra Bullock and hurtling through space, desperately clutching his severed oxygen line. It’s fucking terrifying. Later, HAL silently turns off the life support for the three astronauts still in stasis. This sequence is deeply unnerving and off-putting, but that’s less because of what HAL is doing, and more due to the score set behind it.

You see, there are massive swathes of this film with no dialogue – in fact, there’s a drinking game wherein one of the rules requires the players to drink every time two minutes passes with no words being spoken, which would be brutal. These speech-less segments are not silent; they are instead filled with often incredibly annoying repetitive sounds like Dave’s heavy breathing, background static or, in the case of HAL’s massacre, incessantly beeping alarms warning the computer against his actions. The soundtrack became so oppressive it actually drove my girlfriend out of the room during the viewing. However, some elements of the score have become iconic, and are now synonymous with science fiction, particularly that set in space. Strauss’ Blue Danube Waltz (as recently seen in Hitchcock’s Waltzes From Vienna and The Man Who Knew Too Much) has become particularly associated with these things, due to its multiple uses throughout this film.

OK, so I’m not a fan of the soundtrack, but not to a point where I’ll complain about it. In fact, my only real issue comes with the ending. I’ve mentioned in the past that I’m a fan of narratives, particularly ones that make sense and don’t leave too much up for interpretation. This, alas, is not the case with 2001: A Space Odyssey which, despite it being explained to me several times, has yet to completely ring true in my mind. It’s visually stunning, with Dave going down some kind of space disco tunnel, but when he wakes up in a room from the future, but furnished from the past, and periodically sees older versions of himself, before becoming them and subsequently dying, being reborn as a boy in a bubble – in space – it loses me just a little bit. I get where it’s trying to come from – the monoliths appear at important stages in the progression of humanity – using a tool for the first time etc. – but I couldn’t quite work out exactly why this was all happening to Dave, or how, or even what, to some degree. 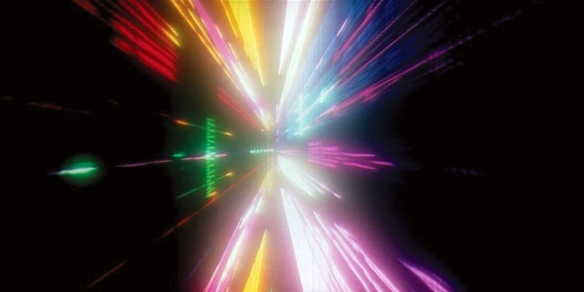 I probably need to watch the film again (I hear this works better on repeat viewings, which makes it such a shame that it’s quite a long film) and I do indeed plan a re-watch at some point, but it won’t be in my near future. As it stands, I loved the majority of what was going on here, with there being so much that’s impressive from so many aspects of film-making that it all more than makes up for the overly obscure conclusion.