I don’t normally discuss trailers for future movies on my site, but sometimes… Well, sometimes Jurassic World happens. If you’ve ever read anything I’ve written or listened to any podcast I’ve appeared on, you should know how huge a fan I am of Jurassic Park. Well, Jurassic World is a film I’m somewhat looking forward to seeing next year. Here’s my thoughts on the trailer. Potential spoilers may follow, but this is all speculation gleamed from the trailer.

First off, the requisite children-in-peril come in the forms of Zach (Nick Robinson) and Gray (Ty Simpkins). They’re being sent by their parents to Jurassic World, the fully functioning theme park Jurassic Park was set to become. More on that later. What I’m pleased about here is that the two kids are boys, because that means one thing: no gymnastics! Instead, velociraptors will have to be taken out with haircuts, angst and hoodies.

The parents sending off those kids? Judy Greer and a guy I don’t know. This bothers me, because I like Judy Greer, and here it looks like she’s only going to be in the beginning scene (and potentially a reunion scene at the end). She’s listed on IMDB as “Park Visitor” so there’s a chance she may actually pay a surprise visit to her kids at the park as well. I hope she does.

No helicopters to get to the parks this time around, instead it’s a luxury catamaran, heading to Isla Nublar. Did they not see the start of Jurassic Park 3? Boats don’t work out well around these parts.

Here’s where I start getting concerned. These are the gates to the park, that iconic image I had as a grainy desktop wallpaper for ages back in the day. What’s wrong? Well, I’m pretty sure these giant gates are CGI, as opposed to the practical effects from JP1. Director Colin Trevorrow promised a mix of practical and CGI, to complement the blend in the original movie, but from the images shown in the trailer he’s definitely leaning more towards the computer generated. Not necessarily completely a bad thing (I still love everything Peter Jackson did in King Kong, and that was mostly CG), but it’s a bit disappointing.

The park is definitely up, operational, and packed (this must be a coupon day). I presume this means that InGen got their act together and somehow overcame the many, many horrific incidents associated with the park in the first place. That’s a good marketing team.

And here’s the park in action, complete with deliberate nods to the earlier films in the series. There’s a flock of gallimimus:

A river canoe course (no way in hell you’d get me on there with that little protection, herbivores or not):

And a rolling ball tour around the brachiosaurs. That ball thing is awesome. Great idea whomever came up with that.

And here’s the least subtle nod to Steven Spielberg possible.

When I’d heard about the concept of Jurassic World, I never thought about the aquatic possibilities, so this is a direction I love. Also, look at the size of that creature! How did they think it would be a good idea to breed that thing? It’s like making a Godzilla.

And where would an aquatic zoo park be without a splash zone?

and hatching eggs. All to the voiceover exposition stating: “We have learned more from the past decade in genetics than a century of digging up bones.” Turns out Dr. Grant has become extinct after all.

Hey look, it’s an adult main character! Bryce Dallas Howard plays Claire, a scientist at the park. I have no reason to doubt Howard’s abilities, but she’s also done very little I’ve liked either. In other words, I’m neutral to her. What I am concerned about is her line: “We have our first genetically modified hybrid.” Because now I’m getting some serious concerns that this is following the same plot as Deep Blue Sea (breeding super intelligent sharks to cure brain disease).

Another adult! This time it’s Chris Pratt (all hail Chris Pratt!) as Owen. He seems to be playing the equivalent to Bob Peck’s Muldoon from JP1 – who was my favourite character, so no argument from me – but with a large dollop of Dr. Ian Malcolm’s scepticism about the whole thing. If you wanted to make me love a character, then making him a combination of Muldoon and Malcolm, and having him played by Star Lord/Emmet, would be a pretty decent way of going about it. Looking forward to Pratt being a badass.

Unbelievably, something has gone wrong with the new dinosaur they made (who could have seen this coming?). This is made clear by showing us a helmet with a gash taken out, because these dinosaurs are also behind the attacks seen in the trailers for The Dark Knight Rises and Iron Man 3. Getting pretty sick of this kind of shot. 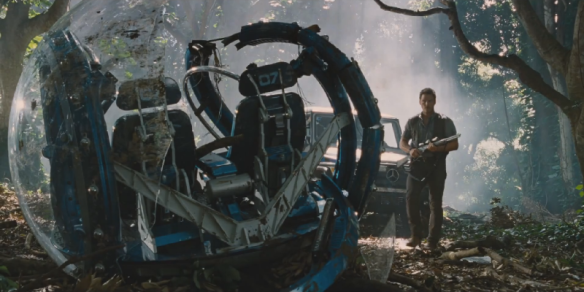 This is the point where Bryce Dallas Howard realises she’s Saffron Burrows in Deep Blue Sea.

This is the point where Bryce Dallas Howard sacrifices herself, like Saffron Burrows did in Deep Blue Sea. Also, I’m guessing (hoping?) they bred the new dinosaur to still have the can’t-see-you-if-you-stand-still gene from the T-Rex. I at least think they might think they’ve bred it in, and the dinosaur tricks them into thinking that somehow, then later it changes its mind and just eats someone completely stationery.

And this, right here, is what we call a money shot. Chris Pratt, on a motorcycle, riding with his pack of trusty velociraptors. If I wasn’t in before, I’m fucking in now. This would only be better if they were pulling him on a sled, like a pack of huskies.

Are you excited too? There’s still some key pieces of this park missing – we’ve yet to see Jake Johnson, Omar Sy, BD Wong, Irrfan Khan or my favourite, Vincent D’Onofrio (one of whom I’m hoping is a Nedry-esque slime ball, my money being on D’Onofrio). Let me know what you think in the comments. Either way, June 12th is suddenly looking a long way away.