Andrei Rublev sits in an odd position for me. As regular readers will know, this year I’m watching films that have been hand-selected from the 1001 Movies list for me to watch by some of my movie-blogging friends, and I’ve also asked a couple of guys who have finished the 1001 List to highlight some of the worst movies on said list, and I’m working through those as well. Andrei Rublev somehow sits on both lists. It was picked for me as a “Recommended” film by Joel Burman, but a “Bad” film by Chip Lary, so I wasn’t sure where I’d settle down on this film. The fact that it appeared on not just the 1001 Movies list but also four of the other five lists I’m going through (everything except for the Total Film Top 120) made me think that perhaps Chip was in the wrong with this one, but now that I’ve seen it I’m definitely swaying more in his direction than Joel’s. 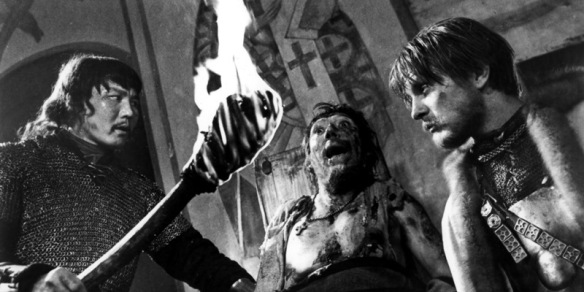 You see, and I hope this isn’t the case with the other Andrei Tarkovsky films I need to watch (Stalker, The Mirror and Solaris), I have no ruddy idea what the devil is going on in this movie. It’s the same problem I have with the few Segei Eisenstein films I’ve seen, in that I clearly don’t know enough about Russian history to grasp any kind of plot points in the film. I’m absolutely positive that everything here means something when drawn up against historical events, but I neither know what they are nor have any interest in finding them out, because those elements of history have never really interested me, and the depictions shown in these films have done nothing to persuade me otherwise.

The plot, as much as I can tell, partially follows the character of Andrei Rublev (Anatoly Solonitsyn), a famous painter who travels around Russia painting chapels and mansions for wealthy or significant people. He has a couple of assistants, Kirill (Ivan Lapikov) and Daniil (Nikolay Grinko) who at some point go their separate ways and have their own adventures. And there’s a whole final hour about making a bell. I didn’t get a great idea as to who many of the people in the film were, what relation they had to one another, what they were doing, where they were going or what anything that was happening was happening for, which in my book makes for a pretty frustrating film. There’s a bit where two of our characters out for a walk encounter a man trying in futility to brush the ants that are covering his legs off. Later a large group of people frolic naked in a lake, following which two of them are chased down by some other people, and the girl makes it away, swimming as fast as she can in an unclear direction, other than away from her attackers. When a mansion is painted for one client and he discovers the painters plan to create an even greater work of art for his brother, he ambushes them in the woods and cuts out all their eyes. A woman cries at a dark substance hand-smeared onto a white wall. I’m sure it all means something. I’m sure some people find great truth and a wealth of insight into these events, but I’m just left like the child in the boat looking on at the nudists being chased, exclaiming “Why are they doing that?!? Why!?!” 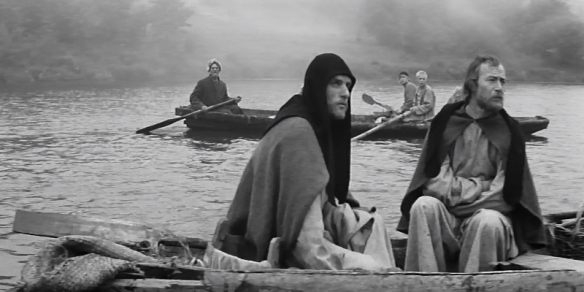 There were a few glimmers of hope in some of the shots. The opening sees a character (notice how I refer to pretty much everyone as “A character”? That’s because I have literally no idea who is who in this film) attempting to escape from some people trying to attack him via a primitive hot air balloon, and the camera follows him running through the base camp, getting everything read whilst watching others fending off the attackers. Elsewhere a raid on a city offers shots of the camera riding alongside a charging horse, and a single take shot of a man escaping some attackers via jumping from a balcony and mounting a rooftop. I approved of all this and many other impressive shots, I just wish they’d been in a film that had made any kind of sense.