Judah Ben-Hur (Charlton Heston) is a Jewish prince in Jerusalem. He lives with his mother (Martha Scott) and sister Tirzah (Cathy O’Donnell), and has a good relationship with his slaves, including Simonides (Sam Jaffe) and his daughter Esther (Haya Harareet), whom it is obvious from the start will have some kind of romantic relationship with Ben, because she’s pretty. A childhood friend of Ben’s, Messala (Stephen Boyd) has returned home to be the new commander of the town, and wants Ben’s help to get the rebelling Jewish faction in line. Ben-Hur chooses his faith and his people’s freedom over his former friendship, so he and Messala become enemies. When Tirzah accidentally knocks some loose roof tiles and injures Judea’s new governor, she, Ben-Hur and their mother are locked up. Ben works on the slave ships, whilst his family are imprisoned in the dungeons. He then devotes his life to finding his way back to free his family, and enact his vengeance upon Messala. 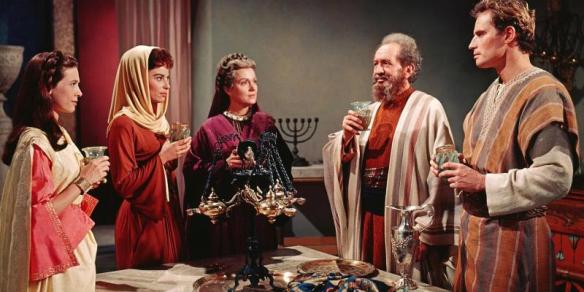 This is the second film I’m watching that DJ Valentine from Simplistic Reviews nominated for me, after 1989’s Batman (purely by coincidence, as I wanted to watch Batman in preparation for last weekend’s superhero movie Lambcast show, and then had some time off work and wanted to cross off one of the longer films I needed to see, hence why I also watched Andrei Rublev yesterday). This is also probably the most epic film I’ve ever seen. I know I’ve seen at least bits of it before, though in my mind I couldn’t remember if it was from this or Spartacus, as in my mind they’d been melded together into one swords-and-sandals behemoth, so I’m grateful to now have at least part of it separated out. Hence, when I saw some pieces falling into place I remembered the eventual fate of Ben-Hur’s family, but that took nothing away from the film. What I somehow didn’t recall, however, was just how large the religious presence is felt here. 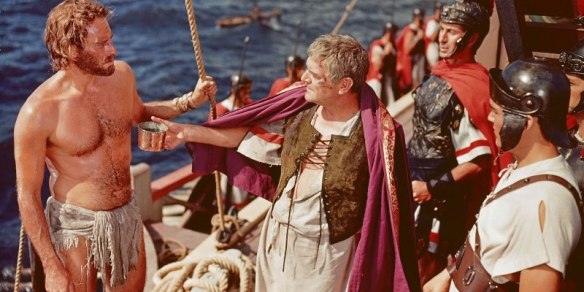 The film opens with the birth of Christ in full Nativity mode, with Joseph and Mary heading to Jerusalem, Mary giving birth in a stable, the bright star guiding shepherds and wise men to join them etc., so I started thinking “Hang on, does Charlton Heston play Jesus in this movie?” and it was a little while before that thought had left my mind. He doesn’t, this is simply a tale that takes place alongside that of Jesus’, with some tangential involvement along the way, so I spent the entire duration of this movie with mad cravings to watch The Life of Brian instead. Not to say this is a bad film, it just wasn’t made by Monty Python. Here’s the thing though, all the religious stuff kind of annoyed me a little bit. Not so much because I’m not a religious person, but more because it fixed everything too easily and turned what was a phenomenally impressive film into a bad taste in my mouth. SPOILER WARNING: You see, at the end of Ben-Hur, Jesus fixes everything. Ben has been reunited with his family, who contracted leprosy whilst being kept in the dungeons for years, and were exiled to a leper colony. Ben-Hur and Esther rescued them and took them away from the colony, much to the rock-throwing distaste of anyone else they came across. On their travels they come across Christ carrying his crucifix up the hill to his death. Earlier in the film he had saved Ben-Hur’s life by giving him water, and Hur returns the favour here, and later, after the crucifixion, Tirzah and her mother suddenly, magically, no longer suffer from leprosy, and their skin is returned to normal. I hate that this happened. Hate it. However, I got the same reaction the first time I watched Christopher Nolan’s The Prestige (which I’ll admit I only half-watched at the time) when what had previously been what I’d seen as a straight-played dramatic rivalry suddenly became a science fiction movie in the last act, but now I love that film, so there’s every chance that if I were to spend another three and a half hours watching Ben-Hur again, I might well get on better with it. For now, though, that ending annoyed the heck out of me. END OF SPOILERS 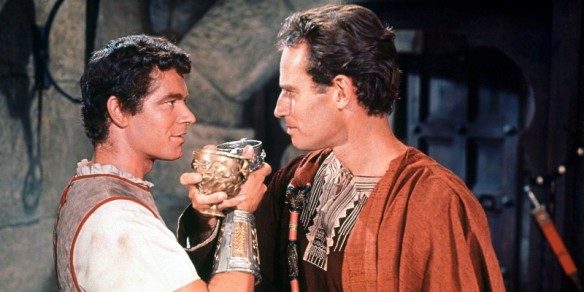 It doesn’t helped that I really loved all the other plot elements. I loved Ben-Hur’s mission of salvation and vengeance, and the chariot race is every kind of awesome imaginable. The sheer scale of everything on screen is at times beyond belief, as apparently there are over 350 speaking roles and 50,000 extras across the mammoth runtime. Add to that thrilling action scenes – as well as the infamous chariot race, there’s a good deal of nautical action and a prison escape attempt as well – and some colourful characters as well. Heston is on fine form as Ben-Hur, performing better than I thought Heston could, having only really seen him on cocksure form in the Planet of the Apes movies (I’m not going to count Wayne’s World 2, Airport ’75 or narrating Armageddon as being meaty roles for him that I’m familiar with). 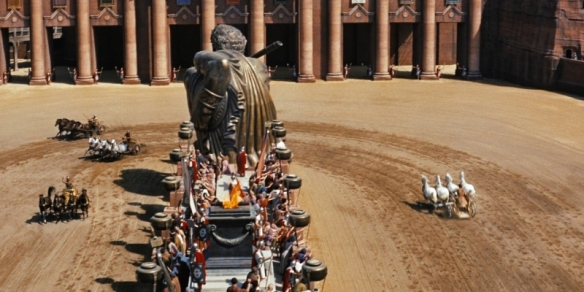 Some moments were a little unintentionally comical, such as the prison guard’s reaction to opening Tirzah and her mother’s prison cell late in the film, and it struck me as a little odd that such an epic, grandiose story could begin with such a humble beginning as a loose roof tile, but there we go. Other elements were a bit too blatant – in the chariot race, Ben-Hur is good, and therefore rides with white horses and never whips them, whereas Messala is evil, so of course his horses are black and constantly feel the sting of his whip, as do some of the other riders, but I didn’t care about that because the race scene was amazing. So much better than action scenes are today, because they actually did it. It’s a 9-lap race, and they show every damn lap. Every rider who falls, every corner, every straight, with no score but the pounding of the hooves and the baying of the crowd, and it never gets boring. How could it? There are actual real lives on the line, not just the characters but the actors, stuntmen and anybody in the vicinity. When they say they don’t make ’em like they used to, they’re talking about Ben-Hur. Granted, most of the film seems to have led up to just getting the characters into the right location, social standing and motivation for the chariot race scene to play out, but when the scene is this thrilling who really cares? Also, the post-race doctor was Dad’s Army‘s John Le Mesurier. 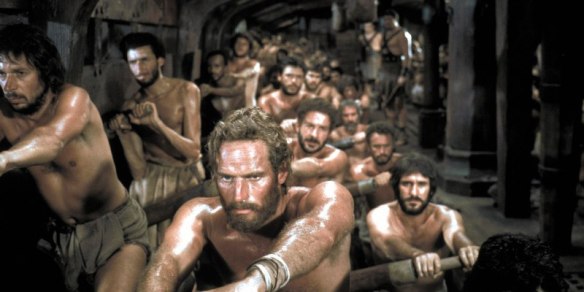 Were it not for my issues with the religious connotations at the end, I’d be giving this the maximum I could. As it is it’s not perfect, but it’s still really very good.