Karl Childers (Billy Bob Thornton) was sent to a correctional facility at the age of twelve. He grew up living in a shed out the back of his parents’ property, sleeping in a hole in the ground he’d dug himself and being picked on by pretty much everyone, especially his father and a local boy named Jesse Dixon. One day, Karl saw Dixon apparently trying to rape his mother, and killed Dixon with a sling blade but, when his mother seems distressed and angry, Karl kills her too, and is thus locked up. Some years later, Karl has grown up and served his time, and is due for release into the world. The only problem is, he doesn’t know anyone willing to take him in. His doctor sets him up with a minimum wage job and limited accommodation, but can Karl make it on the outside, and does he even want to? 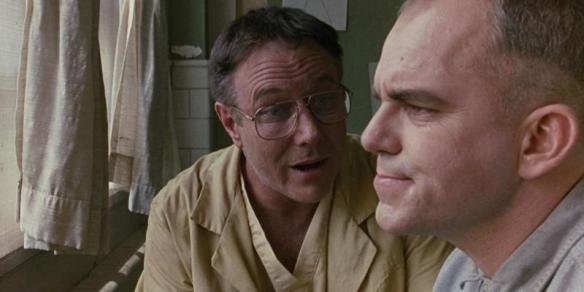 It’s not often that a work of fiction makes me not just frustrated, but downright furious, but that’s how I felt with Sling Blade. I’ve not got a lot of faults with the film, but there’s one specific character who made my blood boil, and I believe was written to do just that. Amongst his adventures outside of the correctional facility, Karl encounters Frank (a young Lucas Black, who it turns out always had that horrendous accent), a kid without a father, but desperately in need of a father figure. Frank invites Karl to come and live with him and his mother Linda (Natalie Canerday), staying in their garage instead of sleeping in an army cot out the back of the mechanic’s workshop Karl works at during the day. Everything about this new setup would be fine – Linda even miraculously agrees to letting this newly released convicted man stay with her and her young son – except for Linda’s boyfriend, Doyle (Dwight Yoakam). The most apt method of describing Doyle is by using a word that starts with “c” and rhymes with “runt”, and which I don’t enjoy using a great deal. He is a lazy, bigoted drunkard who consumes all that is good with the world and expels only putrid bile and hatred. He is obsessed with how “mentally retarded” Karl is, and what he did to become in such a way (“Just how retarded are you? Were you in lock-up for cutting someone up with a hatchet?”). He openly and unashamedly mocks Linda’s colleague Vaughan (John Ritter) for being gay, and never stops bullying anybody weaker than him, which in his mind is everyone, especially Frank. And to make matters worse, Doyle is on the way to ensuring Frank will have a similar future to Karl’s past by constantly making the kid feel like he is the only thing preventing his mother from being happy. When Doyle is mean to Karl and Frank, he advises the child not to tell his mother, so she doesn’t worry about Frank, implying that if Frank does something to upset Doyle, such as telling Linda that Doyle did something wrong, then Doyle will have no option but to punish Frank, and there’s no alternative course of action for anything. I hate the guy so damn much. There were so many times when I was just waiting for literally every character in the film to form an orderly queue and take turns punching him square in the jaw, with Karl waiting at the end with his Kaiser blade. 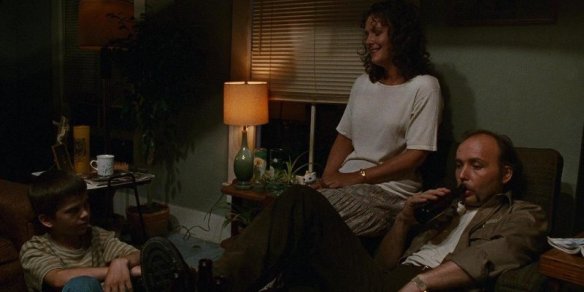 And yet my hatred for Doyle must be viewed as a positive, because it shows what a stellar job the script, which won the Best Adapted Screenplay Oscar, did of forging a truly detestable character, and also how great Yoakam is in the role, especially bearing in mind this was one of Yoakam’s first roles, and he’s always been better known for his music career than his acting, with this, Panic Room and the Crankmovies being all I can recall him in. However, the fact that he plays an ethically-challenged arsehole in all those movies does make me question just how perfect some of these roles may have been for him. Another guy with a surprising performance is Billy Bob Thornton. I knew he played a character with special needs, but when I pictured Thornton doing that the result was not how Karl is portrayed here. It’s a performance unlike any other I’ve seen from him, especially vocally. It’s a physical transformation too, with a forcefully jutted out underbite and a relatively blank experession throughout. It’s no surprise he was nominated for the Oscar, and I’d even argue he deserved it more than Geoffrey Rush for Shine (although that’s more because Geoffrey Rush wasn’t the lead actor for Shine, yet somehow got nominated and won anyway). 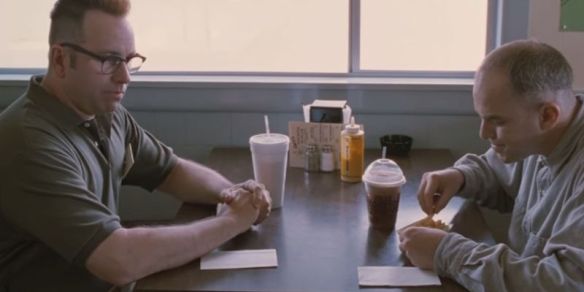 This isn’t an overly surprising film when it comes to the plot, dovetailing as it does in pretty much the only way it can to work within a three-act structure, but that doesn’t mean it isn’t a solid, satisfying drama. The emotional scenes don’t quite hit as hard as they need to – I’m going to lay some of the blame for that at Lucas Black’s feet, even though he’s only a child, because he isn’t all that great in this movie – but there’s enough story here to make up for it. John Ritter is a welcome addition, as indeed are all the smaller supporting characters, who are all perfectly cast as folk who live a long time without seeing a great deal of life. All in all, Sling Blade didn’t go in a lot of unexpected directions, but with the characters and performances on offer it really didn’t need to.